Do these magnetic field measurements of end-fed and center-fed half-wave dipoles corroborate measurements made by antenna experimenters?

Using a sensor and procedure discussed in my article, I made the following plot comparing the magnetic field strength along a 30m-band half-wave dipole fed at center and one end. 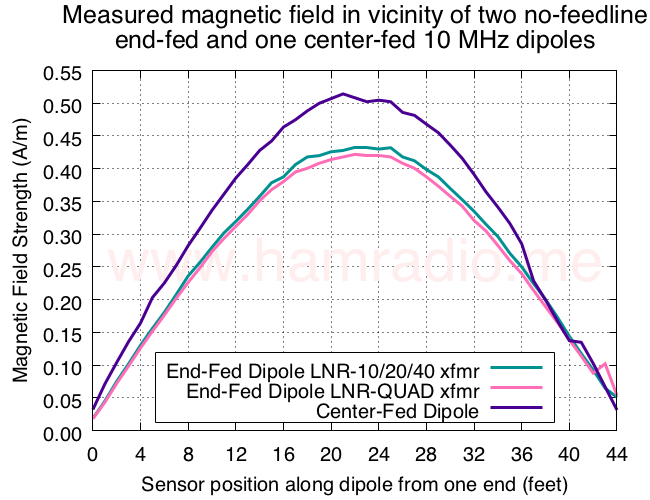 Have I proven one can feed a dipole from its end without need for something to electrically "push against" such as a strategic counterpoise wire or the usual feedline? Or, as quite a few reviewers suggest, is the capacitive coupling to ground still a large player in making the end-fed case work?

I ask because I plan on repeating the experiment with the antenna much further away from ground to confirm what I think I'm seeing in the data and to ascertain the role of capacitive coupling to ground. Tips for the next test are welcome and appreciated.

It looks to be a well done experiment. We see a sinusoidal current distribution in either case, and the current tapers off to (approximately) zero at the ends. But this is what we'd expect of any standing wave on a wire of this length. Where its fed doesn't matter.

Not impossible of course, but increasingly difficult. Of course one way to make the common mode impedance extremely high is to eliminate the feedline, as you've done in your experiment. Or one can simply accept the increased common mode current.

If your objective is to experimentally explore the consequences of an end-fed design, I'd suggest repeating the experiment with a "feedline" added to the feedpoint. The feedline can be a simple piece of wire, and you can include a current transformer on it to measure the common-mode current on it. Repeat the experiment with different feedline lengths (I suspect a quarter wavelength is especially interesting), and with and without a balun, and compare the results.

Not the answer you're looking for? Browse other questions tagged antenna dipole end-fed-antenna or ask your own question.

39
Using a balun with a resonant dipole
20
How to detect common-mode currents or “RF in the shack”?

7
End-fed wire antenna lengths
10
What is the impedance of an end-fed half-wave antenna?
1
Using a common-mode choke on symmetrical antenna system
4
Do I need an 9:1 UNUN for a half-wave end fed?
5
Does a 1/2 wavelength end-fed antenna need a good RF ground?
5
How can I calculate current distribution on an end-fed dipole antenna in theory?
4
Dipole symmetry?
4
Dipole increased CM current using choke balun
4
When a dipole antenna is fed via coax, what powers the ground-side of the dipole?