When a dipole antenna is fed via coax, what powers the ground-side of the dipole?

This is a closely related question: Coax fed dipole: shield goes to one side, yet is grounded via chassis line to Earth

However, it never fully explains what's driving that grounded half of the dipole.

The best I've managed to surmise, is that perhaps the center conductor of the coax somehow affects the inner diameter of the shield of the coax in an equal and opposite manner, and THAT force is what drives the 2nd half of the dipole. But I'm not sure, and no one seems to discuss this directly in any resource I can find.

The other option I've considered is that perhaps the driven half of the dipole is influencing the non-driven half, due to its proximity to the EM field. In that case, the coax wouldn't really play a role other than giving the current somewhere to flow when that half of the antenna is influenced (but that seems wrong since that half should radiate that energy...).

So put simply: in a dipole antenna driven by coax feedline, what's powering the half of the dipole that's connected to ground? Where does that current come from?

Remember basic electric circuit principles: current flows in loops. This is still true in RF, except that sometimes the loops extend out into air (by radiation). Your feed line is a two-wire circuit, and so the current through the coax in one direction must equal the current through the coax in the other direction — unless there is “common-mode current”, in which case the feed line radiates and a portion of the return current loop is through other conductors connected by some path to the transmitter's ground. (But that situation can be analyzed as a superposition of the 'regular' current and the common-mode current.)

You may be thinking: "But the shield is grounded!" That doesn't stop current from flowing in it; it only affects the voltage of (the grounded point(s) on) the shield. Just like our ordinary circuit grounds, that we say are more-or-less "0 volts": there are return currents flowing in the "ground" conductor. Suppose my "transmitter" is a battery instead: I can attach the negative terminal to the coax shield (and optionally to the earth), and the positive terminal to the center conductor, and put some DC load in place of the antenna, and I'm transferring power through the cable. This works the same whether you're looking at DC or RF; the only thing RF adds is the complication of ensuring that the RF won't radiate away except for where we want it to (the antenna).

There is no "ground side" of an antenna or feed line at radio frequencies.

A wire of any dimension longer than a fraction of a wavelength in an RF field can have very different voltages at one end than at the other end (or somewhere in the middle). Thus, it's nearly impossible to absolutely "ground" the entire length of any wire or feed line of finite dimension, if any RF signal or RF field is present. And if there’s a voltage differential and the impedance is finite, then current will flow along that path.

So what's required is something that will allow this shield current to pass through to the dipole, while allowing the potential at the shield and at the shield-fed side of the dipole to be different. So there must be something in the circuit across which this voltage can appear. 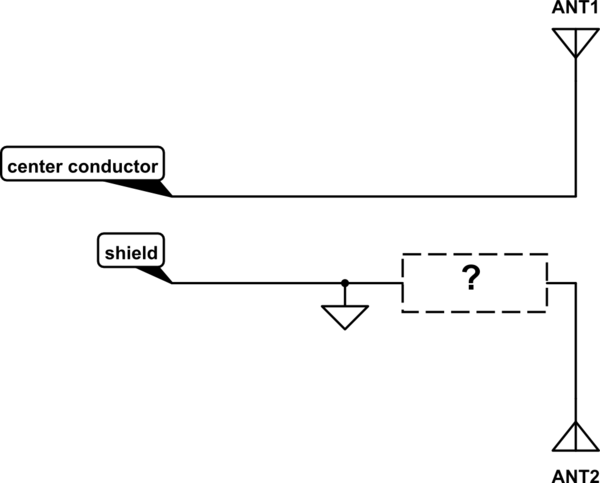 Not the answer you're looking for? Browse other questions tagged antenna dipole coaxial-cable feed-line physics or ask your own question.

39
Using a balun with a resonant dipole
7
Coax fed dipole: shield goes to one side, yet is grounded via chassis line to Earth

11
What is a Gamma match in the context of the driven element of a Yagi antenna?
5
Connect Printed Yagi-Uda Dipole Array with Balun to coaxial cable correctly
4
Grounding a dipole
5
What are the effects of different feed-line incidence angles?
5
How can I calculate current distribution on an end-fed dipole antenna in theory?
0
To folded dipole, or not to folded dipole?
7
Coax fed dipole: shield goes to one side, yet is grounded via chassis line to Earth
2
For a half wave dipole antenna, what's the value of the reactances that cancel out when the antenna is resonant?
0
Pondering variations on the vertical bazooka antenna
2
High electrical noise only when coax shield is connected