I am curious as to what happens to a symmetrical dipole center-fed with balanced feeder-line. Let's assume the dipole is arranged as a sloper - that means it's not parallel to ground (horizontal). Additionally there are several buildings, trees or other conductors or in short, the dipole might be mechanically symmetric but electrically it is unbalanced. The balanced feeder-line is made of 12cm spacers and travels along a path between two surrounding buildings (each 2m distance) until it reaches the symmetrical coupler (ATU). The setup is a crowded city so this scenario should show a bad condition.

According to theory and books there shouldn't be expected any issues related to imbalance and common-mode. But is that true in reality? Let's go further and assume our balanced feeder-line is mechanically not symmetric, for example one lead is 5 or 10cm shorter/longer than the other one. It is self-explanitory that a ham radio operator wouldn't do that intentionally. Is it earrated to use a choke as shown here? (see attachment)

This is a 21 winding Reisert balun scheme (it reverses the windingopposite for lower capacitive coupling). He says that placing this choke between a symmetrical feeder line and a coupler will prevent imbalance (common mode current) through the wires. It will not prevent imbalance occured through stray emmission. Makes sense for me but I would like to hear your comments. Will this choke placed right after the output of a symmetrical coupler prevent imbalance currents, that are caused by the example mentioned?

You could look at this many ways:

Theoretical: if the system is balanced throughout, there's no need for a choke.

Practical: the antenna's surroundings, slope of the antenna, and other variations will unbalance the system somewhat, so a choke may be a good idea.

Lazy: just install the choke: it can do no significant harm.

Empirical: measure the common-mode current and find out.

Any imbalance in the source, the transmission line or the load can give rise to common mode currents. I make this point because we often see only the antenna (the load) as the culprit when in fact the "balanced" tuner and the routing or construction of the transmission line can be culprits as well.

The addition of a common mode choke, such as the one depicted in the linked pdf, will generally be helpful in reducing common mode currents. However, if the differential to common mode impedance ratios become extreme, the balun may not function as intended. High SWR and high common mode current can also lead to destructive failure modes of the balun.

Contrary to the "undefinierte Impedanzen" claim in the paper, poorly matched baluns can cause non zero reflection coefficients independent of its efficacy as a common mode current suppressor.

A balun that is connected to an impedance that has a significant capacitive reactance may cause odd impedance transformations due to the formation of a parallel LC circuit.

If you are using balanced transmission line and you wish to measure the balanced and common mode currents, you can construct a simple instrument such as this: 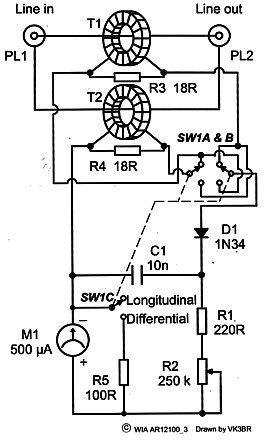 The details of this instrument are discussed by the author on his website. Do exercise caution as this author has previously published articles that are, in my opinion, grossly wrong and even his referenced web page contains errors. But the meter and his descriptions for how to apply it to measure tuner balance, etc. are correct in the context of this topic.

Not the answer you're looking for? Browse other questions tagged dipole balun or ask your own question.

20
How to detect common-mode currents or “RF in the shack”?

8
How is a 1:1 current balun different from a choke?
6
Why aren't there baluns that do BOTH balanced/unbalanced transformation and common mode current attenuation?
1
Can I use two voltage baluns to make a common mode choke?
4
Dipole increased CM current using choke balun
2
Will using a 1:1 balun at the feedpoint of a center feed dipole result in no common mode current on the outside of the coax?
1
Rotatable Dipole & RF Choke
2
300 ohm to 50 Balun at antenna feedpoint, or near receiver?
4
Does a dipole require a 1.5:1 balun?
19
Why do amateur radio operators call an RF choke a balun?