Where year 2016 falls in the sun spot cycle for HF propagation?

Are we now at the good or bad portion of the 11 years cycle? What effect are we seeing now? How large (strong/deep) is the effect during the peak and bottom of cycle? What will change in coming years?

We're about half way down in the waning years of Cycle 24. We're currently on a 9 day stretch with zero sunspots, the first such stretch since 2010.

With the number of sunspots dwindling, we've seen little F layer propagation on frequencies above 25MHz in the last 2 months, and that downward trend is likely to continue. As we approach minimum in 2018(ish), frequencies above 15MHz will only open sporadically and usually thanks to Sporadic E or Trans-equitorial low angle F layer propagation for a couple weeks on either side of the Equinoxes.

In addition to the impact on the higher bands, the mid bands like 20m and 30m will no longer stay open all night, though they will generally continue to produce good DX during the day even at solar minimum. During the minimum of cycle 23, 20 meters rarely failed to open in the afternoon.

The lower solar activity actually improves conditions on 160m, 80m, and to some extent 40m, as there will be less D layer absorption, so those bands will open earlier in the evening and stay open later in to the morning than they have in the past few years. They will also experience fewer ionospheric disturbances and geomagnetic storms as solar activity tapers off.

This cycle was unusually quiet, and the previous minimum was unusually and unexpectedly protracted, so most predictions regarding the various trends and extremes of cycle 24 have so far proven to be inaccurate. It's difficult to say for sure how deep this minimum is likely to be, or how long it will last, but it is safe to assume that the occasional article that pops up claiming we're entering a new Maunder Minimum or the like are just psuedo-scientific rantings. This cycle caught everyone off guard, and proved just how bad we are at predicting these things.

Historically, if we look at the long term trends we can see that while cycle 24 was quite weak, if we look at the cycles before it, there is a clear cyclic trend that dates back to at least the late 18th century. It would appear we're entering a low point in that larger cycle, but it seems likely that cycle 25 and 26 will rebound somewhat or be about the same. Given the rapid descent from the peak in 2014, however, it seems safe to assume this will be another unusually long minimum.

According to this chart, 2016 was not the solar minimum. We appear to be at or very near the minimum right now. However, we won't know for sure until some more time passes.

THREE WEEKS WITHOUT SUNSPOTS: The sun has been blank for 21 days--3 whole weeks without sunspots. To find an equal number of consecutive spotless days in the historical record, you have to go back to July-August 2009 when the sun was emerging from an unusually deep solar minimum. Solar minimum, welcome back! 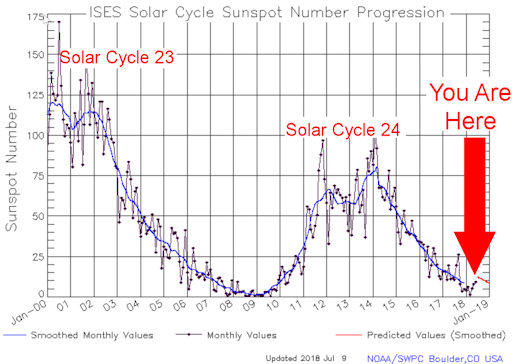 Space weather forecasters have long wondered, will the next solar minimum (2018-2020) be as deep as the previous one (2008-2009)? Twenty-one days without sunspots is not enough to answer that question. During the solar minimum of 2008-2009, the longest unbroken interval of spotlessness was ~52 days, adding to a total of 813 intermittent spotless days observed throughout the multi-year minimum. The corresponding totals now are only 21 days and 244 days, respectively. If this solar minimum is like the last one, we still have a long way to go.

At the moment there are no nascent sunspots on the solar disk, so the spotless days counter is likely to keep ticking. Stay tuned for more blank suns.

Not the answer you're looking for? Browse other questions tagged hf propagation sunspots .

16
What is the cause of this unusually long period of terrible HF band conditions?
3
Where does the year 2019 fall in the sunspot cycle for HF propagation?

9
What are the general effects of a geomagnetic storm on propagation?
10
How do I find out what bands are open?
6
Effect of night on VHF/UHF propagation
11
How to do APRS in real wilderness?
1
How to learn about the physics behind propagation?
16
What is the cause of this unusually long period of terrible HF band conditions?
8
Communications : Ground wave propagation
6
Do short waves pass through or reflect off concrete buildings?
3
Where does the year 2019 fall in the sunspot cycle for HF propagation?