What is the cause of this unusually long period of terrible HF band conditions?

I've been a ham for over 40 years, but never has there been such a prolonged period of such poor propagation. This has been especially the case over the past six months or so, and they continue to deteriorate.

What could possibly be the cause?

This is taking into account information from sites such as Spaceweather and the sites linked to from this page on my site. Even when solar conditions seem to be favorable for good band conditions, the bands are terrible.

Sure, there's solar flares, CMEs, and other events that typically make the bands go "dead". But those effects have been taken into account.

NOT caused by increased man-made noise

In many locations, man-made noise is a factor. But I asked this question from the viewpoint of hams living in quiet areas; my location is almost noise-free, and there are times when my s-meter is zero even with the preamp on. This is about the signal levels dropping.

This image below is from K5BIZ's website (which has been offline for several months now). The network of receivers feeding data to it from K5BIZ's beacons is the most reliable indicator of real-time HF band conditions we've found. The majority of the time, the arrows on each band graph there have mostly been in the red areas of the the graphs for most of these bands like below, and they closely indicate what we hear on the bands. It wasn't always like this.

I know we are near the solar minimum, but it certainly seems that something else is at play. Many other hams concur. What could it be? 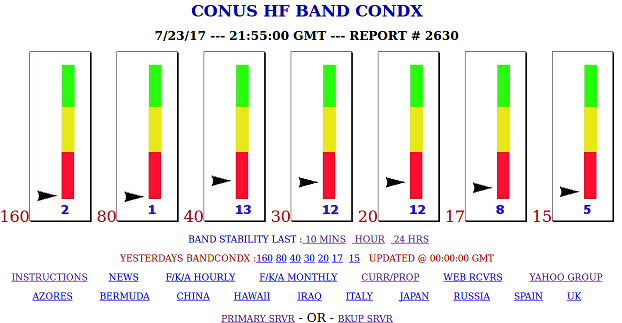 Historically, near solar minimums the upper bands deteriorate while conditions improve on 80 and 160. My point -at the time that I originally asked this- was that all those bands remained poor and the signal levels are much lower than in years past.

There is indeed an overall increase in RFI from such devices as switching power supplies. However, in many locations (mine included) we hear little of that. Something else is definitely at play here. 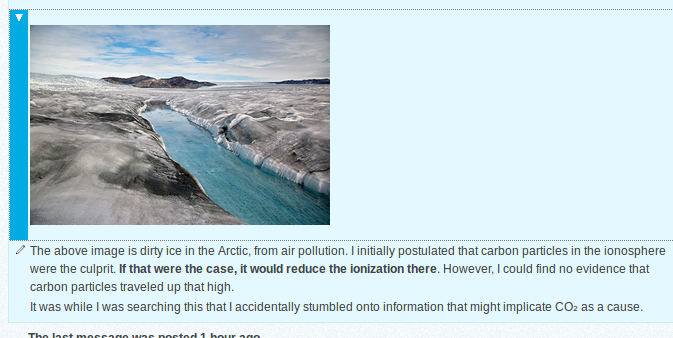 Bandconditions.com has been down. A good alternative is this site.

In an effort to find some hard data, I wrote to Dr Carl Luetzelschwab, K9LA. Carl responds:

"The main reason is because we've basically been under solar minimum conditions for two years - and it looks like it's going to continue. We were spoiled by [shorter - Ed.] solar minimum durations prior to the minimum between Cycle 23 and 24."

The graph Carl attached to his response summarizes the data: 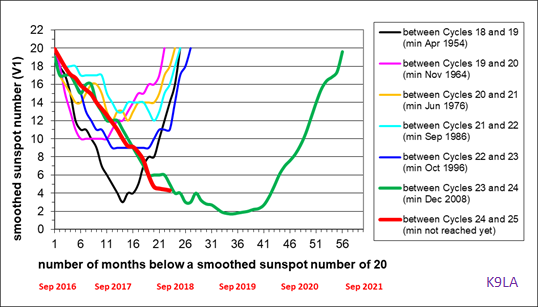 It's pretty clear that we've reached the ~10.7-year solar cycle minimum in the midst of a low part of the ~87-year Gleissberg Cycle. See this explanation from Wikipedia.

Occam's Razor points toward this relatively simple (though unfortunate for us hams) scientific explanation rather than other explanations.

As usual, some hams are responding to this problem by innovating with new weak-signal methods like FT8.

There's no real magic, it's just the signal to noise ratio. If you're certain that the noise floor hasn't changed then the signal propagation has, and vice-versa.

Any number of upper atmosphere hypotheses can lead to a lower charge density which means a lower reflection coefficient resulting in a weak bounce and lousy HF propagation. As you've pointed out at sunspot minimum the density of charged particles passing the earth is lower and that means less charge separation and so on.

I don't think either halogenated hydrocarbons or rising CO2 levels or global warming make a viable whipping boy for this one. They don't have enough effect in the right layers AKAIK. If you want to blame one of those anyway then it looks to be a long wait for better conditions.

I don't think we can blame this on North Korea's rocket testing, IIRC the ionosphere hole from the launch vehicle motor's exhaust fill back up in around 15 minutes. Aw, heck, sure we can... just hypothesize something bizarre in their fuel.

So, that leaves volcanism, meteor showers, and Santa Claus to consider... moving right along...

If that's not it then ... the noise floor. A few billion poorly sheilded digital noise sources and the noise pedestal from cell phone LO's and IFs can't be helping. The rising average utility transmission and distribution voltage coupled with diminishing insulator maintainance may be another source of broadband noise. Someone's bound to have some noise data somewhere...

After listening to the increased noise level on 20M, and its direction, I observe that the noise has a man-made character, varies greatly over short periods, and always peaks with the peak direction of propagation, mostly NE to Europe.

That's what got me googling and to this page with the same suspicion as Noah's - that man-made RFI is artificially raising the propagated noise level.

This is something fundamentally different than what we used to consider a local problem, and seems like a plausible explanation for the really awful state of 14 MHz.

Bands were down, for the first several months figured it was temporary, even though repeatedly Space Weather had no proton showers or other anomalies to explain it. Been a ham for over 50 years, never remember anything like it.

I've begun to suspect some sort of human activity is poisoning the ionosphere. Perhaps a state actor is doing it deliberately for some nefarious purpose, or the proliferation of metallic space junk is knocking out the charged particles up there by some as yet unknown mechanism, or perhaps the fluorocarbon induced ionospheric holes have hit a critical size.

Heard another possibility on the "street". The proliferation of 'space junk' may have something to do with the singularity of the recent HF propagation decline. My recollection of a recent score keeper's reports is that there are 166 million pieces of man made stuff in orbit larger than 1 mm (or is it 1 cm?) weighing of the order of 8000 tons, including 4000 satellites and pieces from 500 collisions. Could that stuff be affecting the ionosphere?

A lot has to do with fewer hams out there and many that lack ability or motivation to setup antennas that work. Just something I have noticed over the years...laziness? Jim

Not the answer you're looking for? Browse other questions tagged hf propagation space-weather ionosphere sunspots .

2
What has happened to HF?
5
What is propagation like when there are no sunspots?
5
Where year 2016 falls in the sun spot cycle for HF propagation?
3
When will propagation on HF improve?

10
What is the best time of day/Band to make a contact with Hawaii from the East Coast?
4
How would one automate HF communications to a specific location?
4
How does one know when band conditions are optimal and what factors to consider?
5
Does a low amount of atmospheric noise reliably indicate a lack of propagation?
7
Is 20m noisy, or do I have a lot of local interference?
2
What is this burst transmission sequence across the entire band?
5
Using shortwave communication, how difficult is it to transmit messages from the UK to the US?
6
If receive performance doesn't depend on SWR, then how can I tune my manual HF antenna tuner by band noise?
4
QRN: How to chase down a solid S9 noise floor on 40m only