I'm planning on mounting a vertical HF multiband antenna on the edge of my roof.

Due to the presence of a paved walkway and some other similar property constraints, I have no room for radials anywhere near the mounting area.

However, I do have a saltwater canal behind my yard. 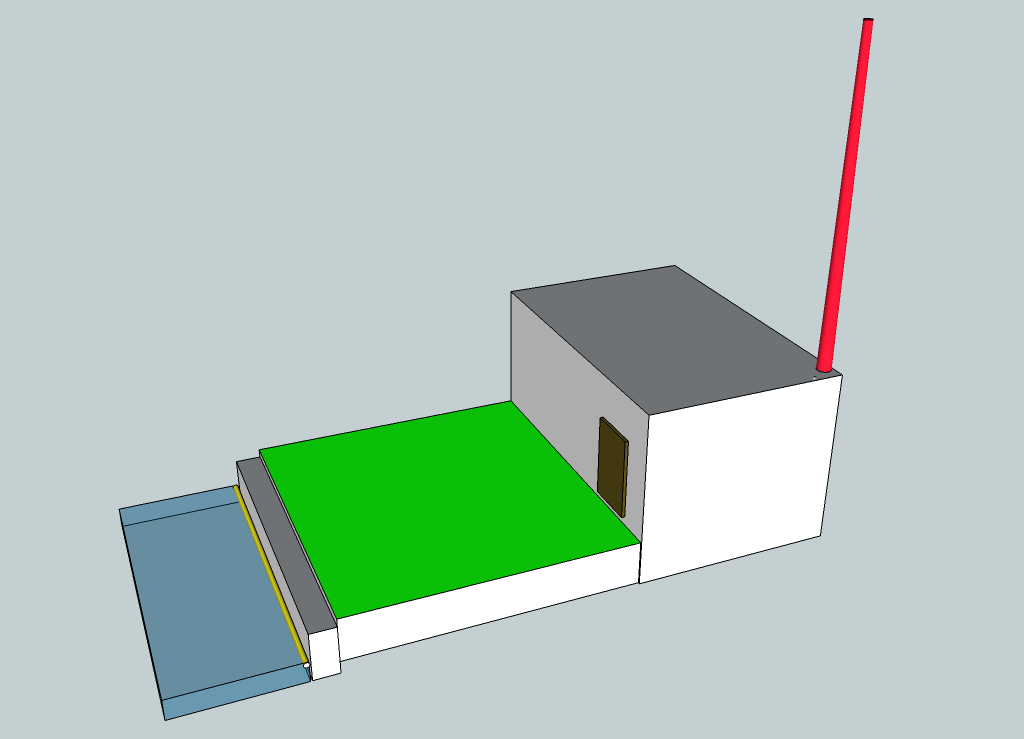 This is a rough and not-to-scale rendering of the situation. The red tapered cylinder represents the vertical antenna. The green part is the yard. Then there is the seawall and the canal itself. The yellow cylinder would be a floating foil-lined tube to maximize surface area and maintain water surface contact as the tides rise and fall.

The base of the antenna will be about 10ft above the surrounding grade and the canal is about 60ft away from the antenna mounting point.

If I were just to try this without seeking advice, I'd run coax with the center conductor attached to the antenna base ground out to the floating tube, probably in some PVC pipe to protect the cable itself from the soil. Is that a reasonable plan?

I've tried modeling this in CocoaNEC, but the transmission line interface is broken and the project hasn't seen active development for a while.

I've considered mounting the antenna on the sea wall itself, but the surrounding area makes that tricky.

With the canal 60 feet away it's not of much help.

As a rule of thumb, a radius of a quarter-wavelength around the base is where the ground is most important. Small improvements can be realized by extending the ground out as far as two wavelengths. Beyond that, the ground is insignificant.

The canal is so far away, and only on one side of the antenna, so it will have negligible effect on the antenna. The antenna's operation will be dominated by things closer to the base, like the feedline, or the wire you run from the antenna to the canal. You'll essentially have a vertical with one radial.

If at all possible, I'd suggest considering alternate antenna designs. Verticals can be made to work well with as few as two radials, but this involves tuning them to be resonant, and raising them several feet off the ground. This minimizes the current in the soil, thus minimizing losses.

Without deliberately installing radials you will make some contacts, and if that's all you're able to install then by all means go for it. But it's far from ideal.

After many years of quite different antennas, I tried the Cush-Craft R5 vertical, since it's designed to compensate for all the variables. My situation is on Mustang Island, on the Texas Gulf Coast, thus I'm quite well acquainted with salt water and salt air. Salt water grounds need attention regularly to check on efficiency, as well as salt air degradation of antennas.

Not the answer you're looking for? Browse other questions tagged antenna hf grounding earth .

9
Grounding VHF base station antenna
3
Counterpoise from artificial ground vs base of antenna
4
Bonding of Coax shield to RF ground conductor for long ground runs?
6
Is a ground plane necessary for transmitting and receiving with a vertical (monopole) antenna?
4
Antenna, input and ground bonding
8
Can I use a helical ground plane radial in the same way that a loading coil works?
5
Base vs center loading a vertical antenna
2
Grounding of a portable setup
0
Ground pass through cinder block — copper pipe, braid, stranded?
4
Frequency selective surfaces working principle