Question from new ham here, regarding ways of matching impedances between a feedline and an antenna.

Is it possible to fashion a broadband HF impedance matcher from a length of windowed twinlead, in which the size of the cutout windows along the length of the matching section is smoothly varied from one end to the other?

Alternatively, is this possible by using a length of twinlead in which the distance between the conductors is smoothly varied from one end of the line to the other?

According to Vincent D. Matarrese's Master's thesis, "Tapered radio frequency transmission lines" (Portland State University, 1992), there is a long history of using tapered-impedance transmission lines in matching systems. It's much too big a topic to review in an SE post, but the thesis is loaded with references for exploration.

The Delta match is an example of the application of this technique: 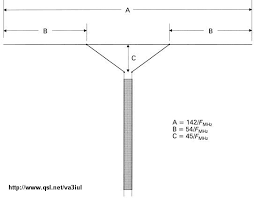 It has been described in the ARRL Antenna Book for decades. PA3HBB gives equations that can be used to construct a delta match for a given matching situation.

We can begin to consider the prospects for your proposal by evaluating the impedance of bare-wire twinlead and fully-immersed twinlead. The impedance of a two-parallel-wire transmission line is:

Using Polyethylene's $\epsilon_r$ of 2.5 as an example, the impedance of 18-ga conductors (d=0.0403-in) spaced 1-in apart would vary between $385\Omega$ for bare wires and $243\Omega$ if the wires were fully immersed in the dielectric. Even without "windows" in the dielectric, its effect is probably ameliorated by at least a factor of two, reducing the impedance variation to about $344\Omega$, which wouldn't provide very much impedance transforming capability.

8
Variable phase antenna
12
Is there an optimum Antenna Feedline Length for mobile installations?
4
Which is better in my situation: Balanced dipole, or as much wire as possible in the air?
2
SWR, overall, is too high
6
Why do we distinguish between balanced and unbalanced?
1
Impedance matching between antenna and load - Theory and Practice?
5
Impedance matching using Smith Chart and relationship to reflection
3
Building a low-power simple RF frequency (433MHz or 900MHz (but not both)) detector effective at 5m with a 10mW signal
4
High-Z RF amplifier for magloop RX vs Q-factor
1
Measuring actual feedpoint impedance for a given frequency