Lightbulb as an SWR detector?

Back in ye olden days before SWR meters and auto-tuners, how was a ordinary household lightbulb used to help tune an antenna system? What did the circuit and tuning procedure look like?

I don't know much about this, but for what it's worth I do have a rather distant memory of doing this long ago, before transistor RF power amps became affordable and before I had a way to measure SWR or harmonic content of the transmitter output.

The transmitter was a very basic VFO, buffer and a 6V6 RF final, maybe 3 or 4W RF output max. The antenna was roughly 1/4 wave of wire strung out the window to a nearby tree (with an electric fence insulator at the end), using a pi coupler for matching, all very experimental and mostly built from parts of old valve receivers that I'd been lucky enough to be given. The valve output stage was robust enough to cope with severe mismatches. I remember getting RF burns from the antenna connection.

My equipment was only a small multimeter, a very simple field strength meter (that used the multimeter), a borrowed portable transistor receiver that had short wave bands, and a soldering iron, so there was a lot of guesswork and experimental method involved.

I was being mentored by a ham who was very kind and encouraging to me. He had lent me a copy of the ARRL handbook, and gave me ideas to try. He had been a Post Office/marine radio op in the war I think, and he knew a lot about getting things working with very little test equipment.

He told me that a (15W) 230V lightbulb in series with the antenna at the output of the pi coupler could be used as an indication of how much power was getting to the antenna. The pi coupler was adjusted until the lightbulb glowed brightest and it was then removed, and the field strength meter was used to peak the pi coupler settings.

Looking back on it I have little idea of how effective this method was in adjusting SWR, but I remember it made adjusting the coupler much easier than just using the field strength. The current in the bulb obviously does not actually indicate SWR, but serves as a rough initial indication of the matching of output stage to antenna I think. It was certainly quite reassuring to see direct evidence of current in the antenna circuit anyway.

Mainstream hams first started to appreciate SWR in the 1940's. In that era some of the first SWR meters started to come on the market. But their accuracy and frequency range was quite limited. Toward the end of the 1940's military surplus coaxial cable was hitting the ham market. Up to that point, ladder line was typically used for most ham antenna installations.

In October of 1947, Charles Wright, W4HVV wrote an article in QST bemoaning the accuracy and availabilty of SWR meters for "28 mc" and higher. His article, entitled The Poor Man's Standing-Wave Indicator, described a simple twin lamp (2 volt, 60 mA each) arrangement connected to a one turn pickup loop that when placed in parallel with the ladder line would give a relative indication of SWR. 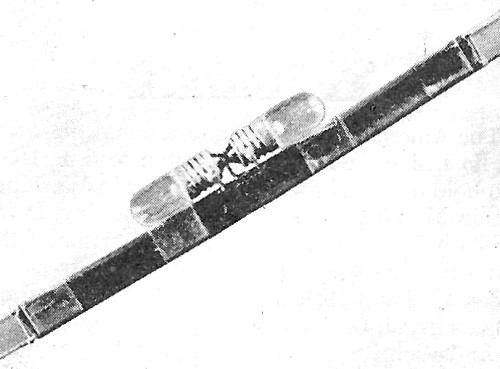 When SWR is low, one lamp glows. As SWR increases, the second lamp begins to glow. By visually calibrating it using various dummy loads, the author was able to estimate the SWR.

Normally, the on-line QST archives are only available to members but I did find a full copy "in the clear" for your reading enjoyment here.

Not the answer you're looking for? Browse other questions tagged impedance-matching swr-meter history or ask your own question.

2
SWR, overall, is too high
1
Impedance matching between antenna and load - Theory and Practice?
3
Understanding of NFC Reader Antenna matching
10
How did hams manage to tune their antennas before VSWR meters?
5
What additional information do I get from an RF ammeter, as compared to a regular SWR/wattmeter?
5
Determining Impedance With An Antenna Analyzer
2
Why SWR significantly changes with adding 10-30 meters of coax in presence of RFI choke?
5
Looking for a book that contained a circuit for receiving (literally) underground amateur radio transmissions
1
Antenna Tuner Range
3
SWR of 1.5 -- use internal antenna tuner or not?

// TODO sg: TMP solution until we are confident in our current implementation of async imports // once we are, we can move the if into the js entry file and dynamically load the mark obsolete module