Why SWR significantly changes with adding 10-30 meters of coax in presence of RFI choke?

When I measure SWR right in the bottom of the antenna, using only 2-3 meters of RG58 as a feeder, I get this: 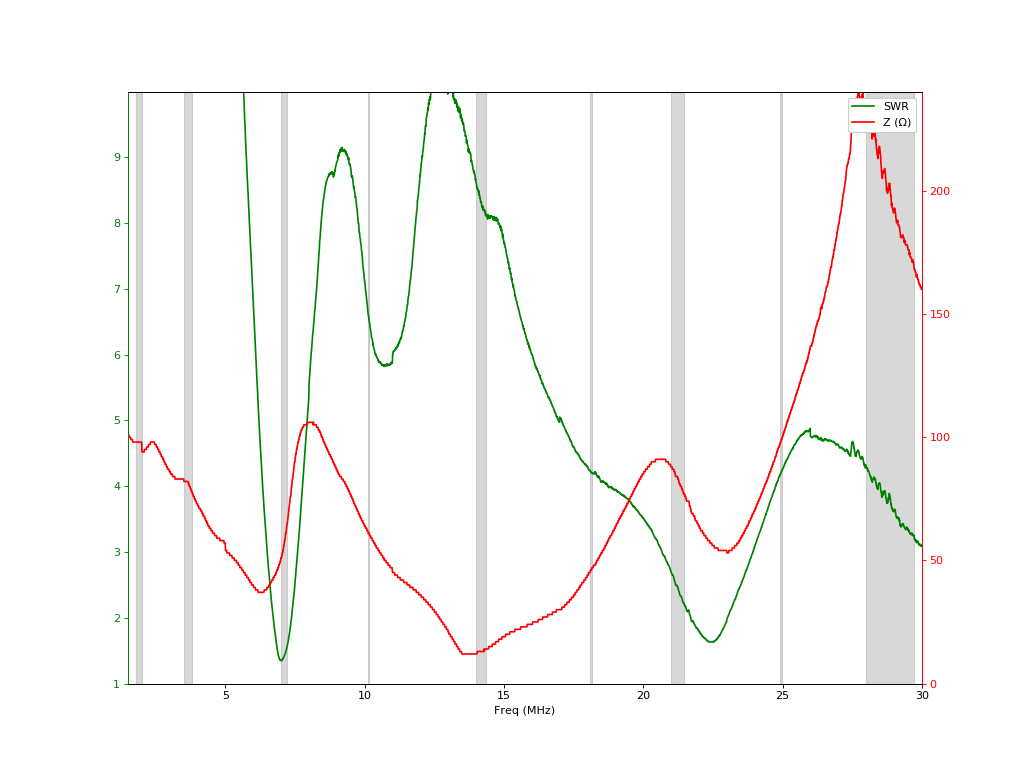 This is pretty much what I would expect - a resonance around 7 Mhz + around 21 Mhz as a 3rd harmonic. The SWR meter is not well calibrated, thus it shows SWR 1.3:1 at 7 Mhz when it's in fact 1:1 according to two other SWR meters I have.

If I add about 10 meters of RG58 to the feeder the picture changes, but not much in terms of SWR: 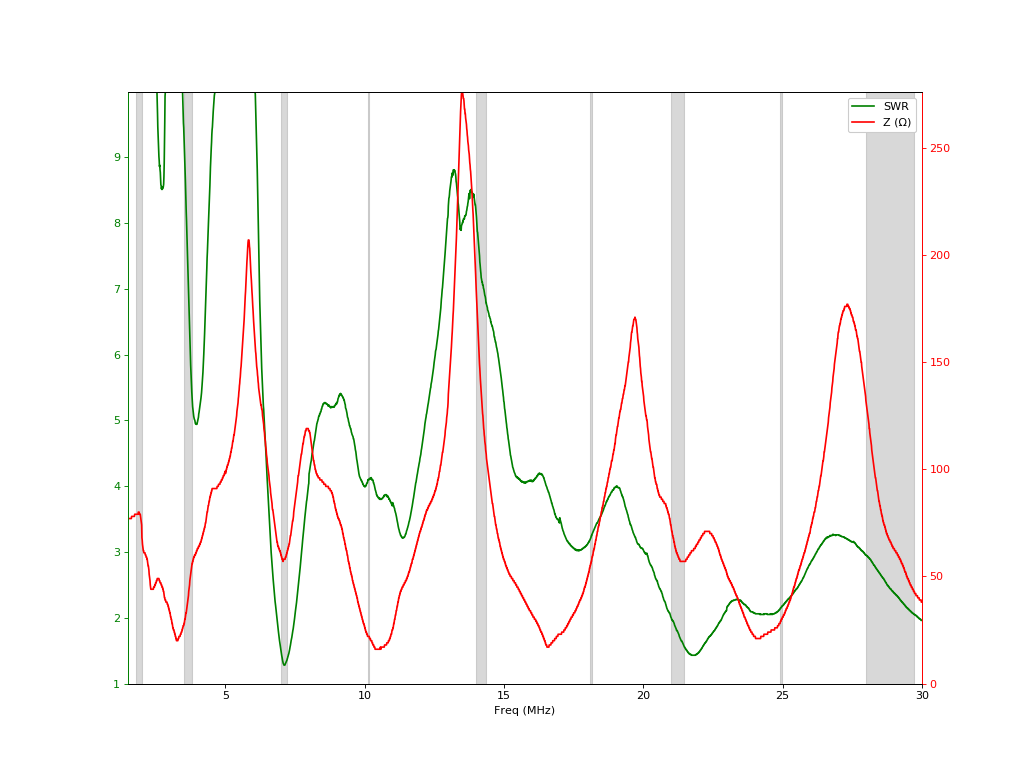 Finally, here is what I see if I measure SWR from the shack (about 30 meters of coax): 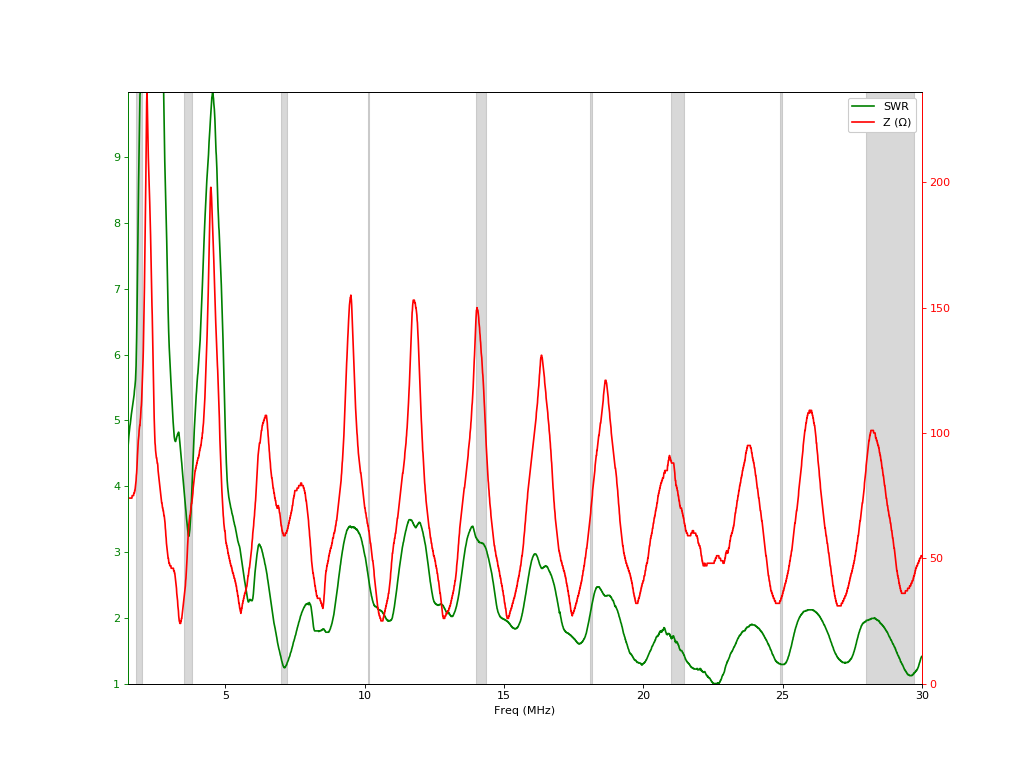 This I find quite surprising. I've found a few similar questions, including:

Although both explanations sound plausible 1) I'm quite conviced that common mode current is well suppressed in my case. I used this choke many times before under different conditions and with different power. Nothing indicated that the coax radiated anything. 2) Somehow I doubt that 10 or 30 meters of coax introduce significant losses. Also a 100W transceiver agrees with SWR readings I get.

Are there any other reasons why SWR could depend on the length of the feeder? For instance, can the feeder work as a matching device for the antenna on certain bands? If it's possible then how does it work?

The repeating hi-Z measurements seen when SWR is measured with the 30m line suggest that it is defective. One needs to know the velocity factor and loss of the cable to determine the location of the defect. These should be determined from measurement, as actual lines can deviate significantly from published specifications and values can change as a result of electrical and environmental ageing.

As shown on DAE Notes, the impedance measured at the input to an open-circuited transmission line will be high at frequencies at which the line's electrical length is an even multiple of a half-wavelengh:

The fact that you observe similar behavior with a different antenna as the load reinforces this conclusion.

5
Will measuring SWR through a feed line mislead me?
1
Exactly why do some SWR meters give a changing reading depending on the length of coax used to connect to an antenna?

6
Why do we distinguish between balanced and unbalanced?
1
Exactly why do some SWR meters give a changing reading depending on the length of coax used to connect to an antenna?
1
Why some hams test their baluns with an SWR meter?
4
Can I use a 1:1 current balun to feed a 1/4λ vertical?
1
SWR characteristic changes when lifting coax off the ground?
4
Actual Impedance of a folded dipole at resonance
2
how does this collinear antenna work?
3
Looking for criticisms on my VNA-like SWR meter I am designing
2
Do VNA (nano) suffer the same effect of coax length to swr, as swr meters do?
1
Common-mode choke (CMC) hurting my SWR. Live with it? Drop the choke?