Does an SWR higher than 1:1 necessarily cause additional heat in the transmitter?

Each of the 3 answers to SWR of 1.5 -- use internal antenna tuner or not? in one way or another suggest that an SWR of 1.5:1 will cause additional heat in the transmitter:

The radio may heat up a bit more during transmit with a 1.5:1 SWR, however i imagine that all Icom radios are designed to easily handle the slight increase in temperature without problems.

It is probably easier on the radio to use the tuner. The disadvantage of the tuner it that it decreases efficiency slightly. But with the swr fixed by the tuner, the radio may be able to put out a higher power without overheating, which should more than make up for the efficiency loss.

If you do use the tuner, you move the mismatch from the PA to the tuner circuitry, and instead of heating up the PA transistor(s) you will be heating up the tuner components. The cooling fan will be used to remove the heat.

Reading these answers, one could get the impression that an SWR greater than 1:1 always causes additional heat in the transmitter, and this additional heat is the reason we might want to minimize SWR. Is that correct, or might the effects and dangers of a high SWR be something else?

As others have stated, VSWR is a property of the line and the load, not the transmitter. One could for example have a 50 ohm antenna on a 400 ohm feedline, a VSWR of 8:1, but the transmitter still sees a 50 ohm load.

That's probably not what's often meant however. For the purposes of this question we probably assume a 50 ohm feedline, so a VSWR greater than 1 means the transmitter sees something other than the 50 ohms it was designed for. The feedline is actually irrelevant, except that it's part of what determines the impedance seen by the transmitter.

Now if the VSWR is greater than 1, this means there's some reflected power in the transmission line. The common assumption seems to be that this reflected power makes it back to the transmitter, where it is necessarily converted to heat, somehow.

So this notion of "reflected power being converted to heat" has to go. Instead we should be asking if a load other than 50+0j ohms, as seen at the transmitter's antenna connector, makes the transmitter hotter.

Transmitters are not magic circuits. A linear transmitter consists of some voltage source (or you could model it as a current source, if you prefer) with some impedance $Z_{src}$, driving some load of some impedance $Z_{load}$. The source impedance is determined by the transistor or tubes used and things like the resistance of the traces or wires connecting them, as well as filters and transformers and relays that might interface those transistors to the antenna connector. Still, no matter how complicated the transmitter, if it's linear, at a given frequency, its operation can be fully modeled by a voltage source and a series impedance: 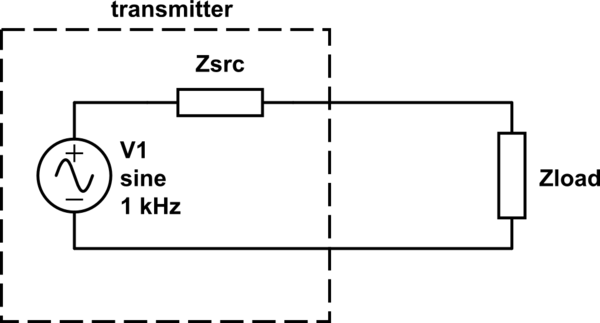 No. There are a couple interesting cases:

So let's frame the question in terms of efficiency:

Where here, "the load" refers to everything past the antenna connector, and so includes the feedline (because remember, the transmitter can't really tell there's a feedline).

Any energy drawn from the power supply but not delivered to the load will in practice be converted to heat since there isn't really any other place to go.

So then, does a load impedance other than 50 ohms always result in reduced efficiency?

Efficiency is determined by the ratio of the real parts (resistance) of the source and load impedance:

When a load is specified as just a VSWR, there are infinitely many impedances which that could be. Of all of those, one will have maximum efficiency and be more efficient than the matched case, one will have minimum efficiency and be less efficient, and all the rest will be somewhere in between. So, for some cases of a mismatch the result might be less waste heat in the transmitter.

So does this mean there is a "better" impedance than 50 ohms? The answer is again probably no, because while there may be some load impedance which is more efficient, efficiency probably isn't the only concern. As the load impedance increases efficiency goes up, but also maintaining the same power requires a higher voltage. Since the transmitter can't generate an infinite voltage, this might mean the transmitter is unable to develop its rated power into this high impedance, high efficiency load.

Or more generally, the transmitter just may not work as specified when the impedance is outside the design range. It might not develop full power, or it might arc, or it might drive the MOSFETs into avalanche breakdown, or it might oscillate. Or it might overheat, but this is just one of several possible failure modes.

If a load is reactive (inductive or capacitive) then sinusoidal voltage and current feeding that load will be out of phase. Therefore, to output the same power (to be dissipated by the load as heat or EM), a higher feed voltage will be required to offset the (cosine) reduction from Irms*Vrms due to a non-zero IV phase. The power required into many types of (close to) linear amplifier circuits increases with increased output Vpp. Given such an amplifier circuit, at equal power output, a non-reactive output load will minimize this amplifier power requirements.

Any difference between power input and power output in a black box (the transmitter) is usually dissipated as heat. If the output power is reduced (fold back and/or more power is just not available from the power supply) then this difference might be reduced. Any difference may or may not be measurable above other measurement variations (room temp, nearby cup of hot coffee, etc.)

An SWR of 1.5:1 is a feature of the line and the load, it doesn't tell you much about the transmitter.

If the source were 50 ohms, (a perfect voltage source and a 50 ohm resistor), efficiency would depend on the phase of the reflection as follows:

Now what if the transmitter impedance was < 1 Ohm, like an audio amplifier? Efficiency would be essentially independent of the load impedance. And of course the equations for power delivered would also depend on the phase.

As an additional answer, I would add that the answer most appropriate for many operators is to test this with their actual transmitters. For equipment safety, one should test this by transmitting at power levels well below the rated power output of the amplifier, and by only gradually increasing the test SWR as measurements are made, perhaps using a manual antenna tuner or variable resistance dummy load. One can use a contact thermometer, an IR thermometer, or for many transmitters, the built-in temperature read-out.

My sample-of-one small QRP rig clearly runs at a higher temperature (via both IR thermometer and built-in internal readout) when transmitting just 1W of WSPR into a 4:1 (and higher) SWR, vs into a 1.5:1 SWR feedpoint. I ran these tests to determine whether this transmitter had the thermal capability to survive the use of very non-resonant Q&D wire field antennas.

SWR increases the loss of coax. So, if you were to measure an SWR of 1:1.5 at the antenna feed point, it is possible that by the time that signal got to the other end of your feed line, the feed line may have absorbed (as loss) enough that the SWR might be close to 1:1 at the radio, so in this situation, no extra heat would be generated in the radio. The coax presumably would be long enough that the added heat in the coax would be trivially dissipated. Typically if coax is going to fail from high SWR, it would be caused not by heat but by high voltages that cause the coax to internally arc. For instance, RG58 is typically rated for 600v. (Having said that, I've seen high swr in broadcast station coax to cause the coax to burn through, and I do not know if this was caused by arcing or heat from absorbtion.)

However, assuming you intended to measure the 1:1.5 SWR at the radio rather than at the antenna, then yes, this higher SWR would generate more heat in the radio than a 1:1 SWR.

However, most solid state transmitters (say, up to 100w) are designed to handle a 1:1.5 SWR, and possibly even up to 1:2 SWR and should be able to disapate that heat without much trouble. A tube based transmitter could possibly handle a lot more.

Of course, this depends somewhat on environmental conditions, so as mentioned in the other question, if you are operating in an environment that is already pretty warm, the extra heat could cause issues, especially at high duty cycles.

However, if you are using a high power amplifier ("legal limit" in the US is 1500w) even a 1:1.5 SWR is a concern, as the heat from losses will be significant.

An swr above 1:1 implies there is an impedance mismatch in the system. At each impedance mismatch, there will be reflected power. That reflected power has to go somewhere instead of being radiated in the antenna, so something must heat up. If the transmitter is seeing that SWR, the only way it will not heat up is if it reduces its power generation, either by design or by malfunction. (And then it still heats up -- just not as much as it would have at the higher power, until the power reduction reduces the SWR to 1:1 at the transmitter.)

This is a conservation of energy issue really. Let's break the problem down:

Consider the system as two devices: the power supply (transmitter), and the load. The load includes the feed line and the antenna together. I see the transmitter end of the feed line as the input port to the load.

This means that the transmitter sees no reflected power, because together the feed line and antenna dissipate all the energy.

Case 2: SWR is 1:x where x > 1 and the transmitter is able to handle the reflected energy

In this case, a portion of the reflected energy is absorbed by the transmitter, causing it to heat slightly, and a portion of the energy is re-reflected back into the feed line as part of the standing wave that causes x>1. The heating of the transmitter caused by its own inefficiencies plus what it absorbs is within its ability to dissipate, and it continues operating.

Case 3: SWR is 1:x where x > 1 and the transmitter is not able to handle the reflected energy

Case 4: All reflected power caused by SWR is reflected back into the feed line

Not the answer you're looking for? Browse other questions tagged impedance-matching or ask your own question.

10
Does Coax Limit the Maximum SWR a Transmitter 'Sees'?
8
SWR Measured at the Transmitter versus SWR at the Antenna
5
What additional information do I get from an RF ammeter, as compared to a regular SWR/wattmeter?
5
Determining Impedance With An Antenna Analyzer
7
Why aren't "ghosts" and intersymbol interference due to unmatched impedance (high SWR) a concern for HF receivers?
2
Looking for criticisms on my VNA-like SWR meter I am designing
6
If receive performance doesn't depend on SWR, then how can I tune my manual HF antenna tuner by band noise?
4
Is testing SWR *practically* less important for 2m/70cm than HF bands?
1
Do VNA (nano) suffer the same effect of coax length to swr, as swr meters do?
1
SWR erratic based on time of day