As I progress in my path to getting a ham license I notice that a lot of radio enthusiasts avidly talk about their radio shacks (or do they call it cabins?).

From what I hear they have handheld ham radios, but I'm guessing they don't have much range.

You do not need a lot of space for ham radio.

I started with a Baofeng handheld radio. Then added a slightly better antenna. That all fits in a drawer at home and a backpack while traveling. It works great in flat terrain and when on top of hilly terrain.

What I needed for a bit more reliable communication was an external antenna that was both more efficient and could be placed higher. So I bought a nicely handmade "slim jim" antenna off eBay that had about 10' cable attached. I can hang that from a tree or even the ceiling inside and reach repeaters a few towns away that I couldn't even hear before. But even this antenna itself is flexible (made of old school television "bunny ear" cable), and so it rolls up and fits in the same drawer/backpack.

If you get into lower-frequency (HF) radio you usually need a bit more space, but it can be as little as some speaker wire you hang out across your yard or "loop" antenna you can set in the corner of your room.

A handheld radio needs hardly any space, and is a great way to get started. A handheld with a decent antenna can easily communicate over 20+ miles, depending on terrain. It's good for local area communications. Most handhelds operate on VHF/UHF ham bands, most commonly the 2 m and 70 cm bands. These bands usually require line of sight. I've used mine indoors with a simple off-the-shelf antenna and have been given good signal reports at over 20 miles away.

The HF bands (10-80 m) are the ones typically used for long distance communication. With the right conditions, you can communicate all the way around the world with these bands. Transceivers that can use these bands are typically larger than handhelds (with a few exceptions), and the antenna systems that are required are more involved. This is mainly because the size of an ideal antenna increases proportionally with the wavelength. So, for example, a dipole antenna for the 20 m band would be 10 times larger than one for the 2 m band.

For these transceivers, it's best if you can set up an antenna outside, but it's not mandatory. Few amateurs have ideal setups; in practice we are all making compromises. Some people put antennas in their attics, which reportedly works fairly well. Personally, I don't have any way to set up a permanent antenna system, so I will sometimes put a vertical out my window. I certainly don't have any sort of a ham shack. If space is limited where you live, you might consider some portable options. Portable operation from summits or parks is a popular sub-discipline of amateur radio, and by necessity the gear that is used for that is small and lightweight. This might be a good option if space is limited where you live.

In short, we all make compromises with our setups. You definitely do not need large amounts of space or an outdoor antenna to be involved with ham radio.

Hams like to talk about their "shack" because it's a dream to have one. My "shack" is an extra shelf I added to my desk.

But a real ham shack is separate from the main house, to get away from all the noise like cheap noisy wall wart switching power supplies, plasma TVs, running brush motors, and similar. Actually, this is a luxury and only a minor benefit. Good antenna placement is more important.

The club version of the shack is a place to gather more than anything else.

Inside antennas are easy as long as you don't have a metal roof or rebar in your walls or aluminum siding or metal tinted windows. Having said that, if you are transmitting more than 5 watts, you probably want your antenna outside, or at least 10-20 feet away from any people (or speakers), about as much as you want the antennas away from cheap power supplies, and for the same reason.

The other reason you want your antenna outside is to get it as high as possible. If you're already on the third or fourth floor (or top floor) of a building that isn't metal shielded, maybe you already have that height inside.

But none of that is important for a beginner who just wants to do UHF/VHF, because you'll probably mostly be using repeaters, and the repeater is high so you don't have to be.

My shack is a pair of short bookcases setting on top of desk next to my computer. On it is a power supply, an ICOM IC 7300 for HF and a TYT 9800 quad band mobile for UHF VHF. I also have 2 or 3 HTs and their chargers. I put a few certificates on the wall.

You don't need a lot of space to start, but I do notice the number of radios does somehow keep growing.

Would it be nice to have several hundred square feet with dozens of radios and multiple operating stations all connected to several square miles of tower mounted antennas for all bands. Yes it would be, but the people keep drawing the wrong lottery numbers every time I buy a ticket, which admittedly is not very often.

Note that the actual radios can pretty much be arbitrarily small – in the end, your phone is a fully fledged radio too, just for other bands and other modes than amateur radio uses! (And technically, it does things that are way more impressive than any amateur radio you can buy does.)

Of course, once you want a radio that has very much output power (some amateur radios do 100 W or more of RF power – to me as a communications engineer, that is crazy much power.), that power also unfortunately produces heat, and that heat needs to go somewhere, so these higher-power radios needs some heatsinks, fans and whatnot to keep them cool.

But technically, your radio can really without problem fit in your hand.

The thing that can't technically be made arbitrarily small is the antenna. An effective antenna is always in length somewhere in the order of magnitude of a quarter of a wavelength – you can build smaller ones or larger ones, but the smaller, the more trade-offs the antenna has to do.

That's why people in amateur radio also don't usually say "the 14 MHz band", they say "the 20m band", even if you put in the frequency in your radio in Hz, not in m. 20 m is roughly the wavelength for that band. So, if you see someone with an antenna in their yard that's say 4 to 20 m in size, chances are they are trying to have a very good antenna for the 20m band. Of course, again, a smaller antenna works, but it "costs" you received signal quality, and that means you can't successfully receive transmissions from further away or with lower power.

Many amateur radio users use very low-frequency bands, and through the speed of light, the frequency and the wavelength are linked ($\lambda = \frac cf$); the lower the frequency, the larger the wavelength. But, really, the 2m band (144 MHz and around) takes you very far – and an antenna for that isn't necessarily cumbersome.

My shack is a desk in my den/library: 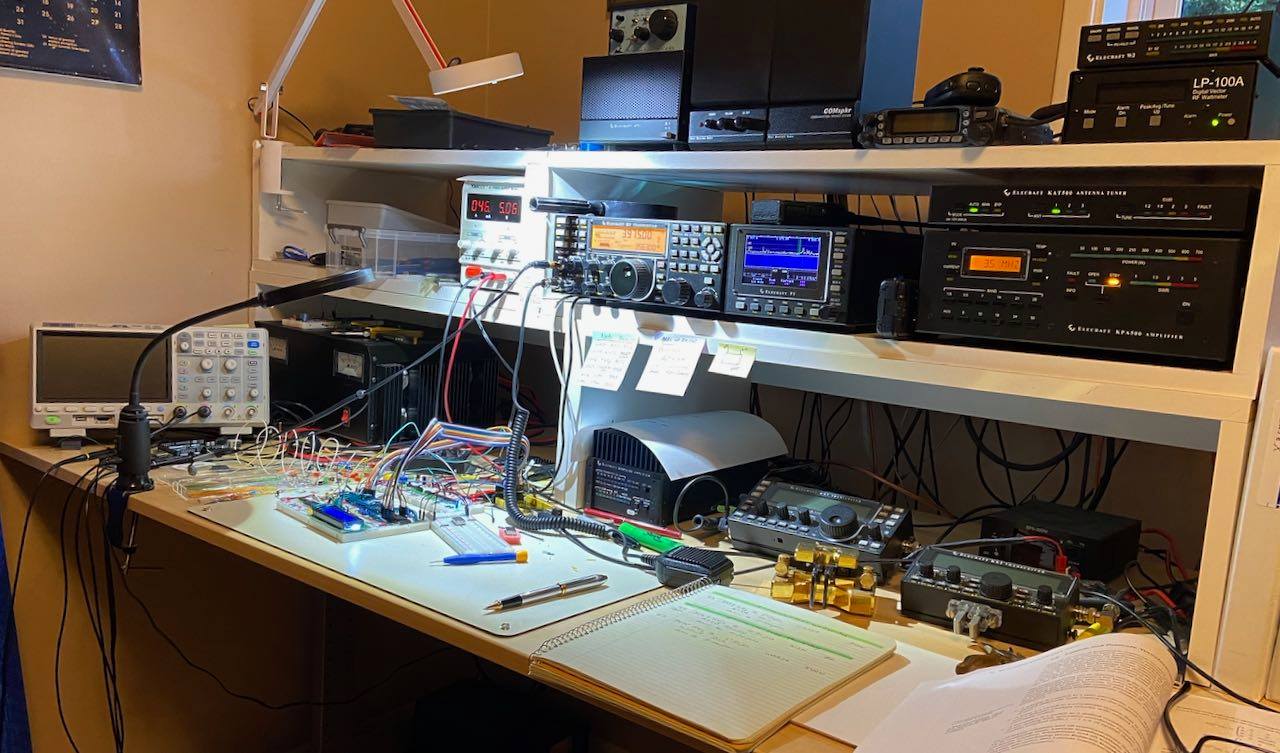 Not much space at all is required for basic radio equipment. There are many handheld, portable, QRP, and kit radios that will easily fit in a small backpack or drawer.

For HF antennas, big, outdoors, and high up is almost always better. With indoor antenna's you have to be careful about coupling and interference (RFI & EMI) with and from the house wiring, lighting, and appliances.

VHF, you can do with stuff that fits in your coat pocket.

Not the answer you're looking for? Browse other questions tagged antenna united-states equipment .

16
Are there any real advantages to an aftermarket NA-701 over the Baofeng stock antenna?
3
Is a copper J-Pole antenna better than a Slim Jim for transmitting?

1
Antenna for small balcony
1
Max legal power with nearly zero BW
8
Antenna for a cramped attic
5
UV-5R 4W BFB297 vs UV-5R 8W BFP3-23 (difference 4W vs 8W)
3
Broadband antenna for SDR radio
1
Why would a nearby antenna cause intermittent transmission?
5
How do I have a full signal of noise on a handheld?
0
Amateur wanting to re-enter ham radio legally
0
Why do ham radio operators refer to current flow on the outside of coax as common mode current?