GNURADIO: What does the complex output of an osmosdr source translate to? 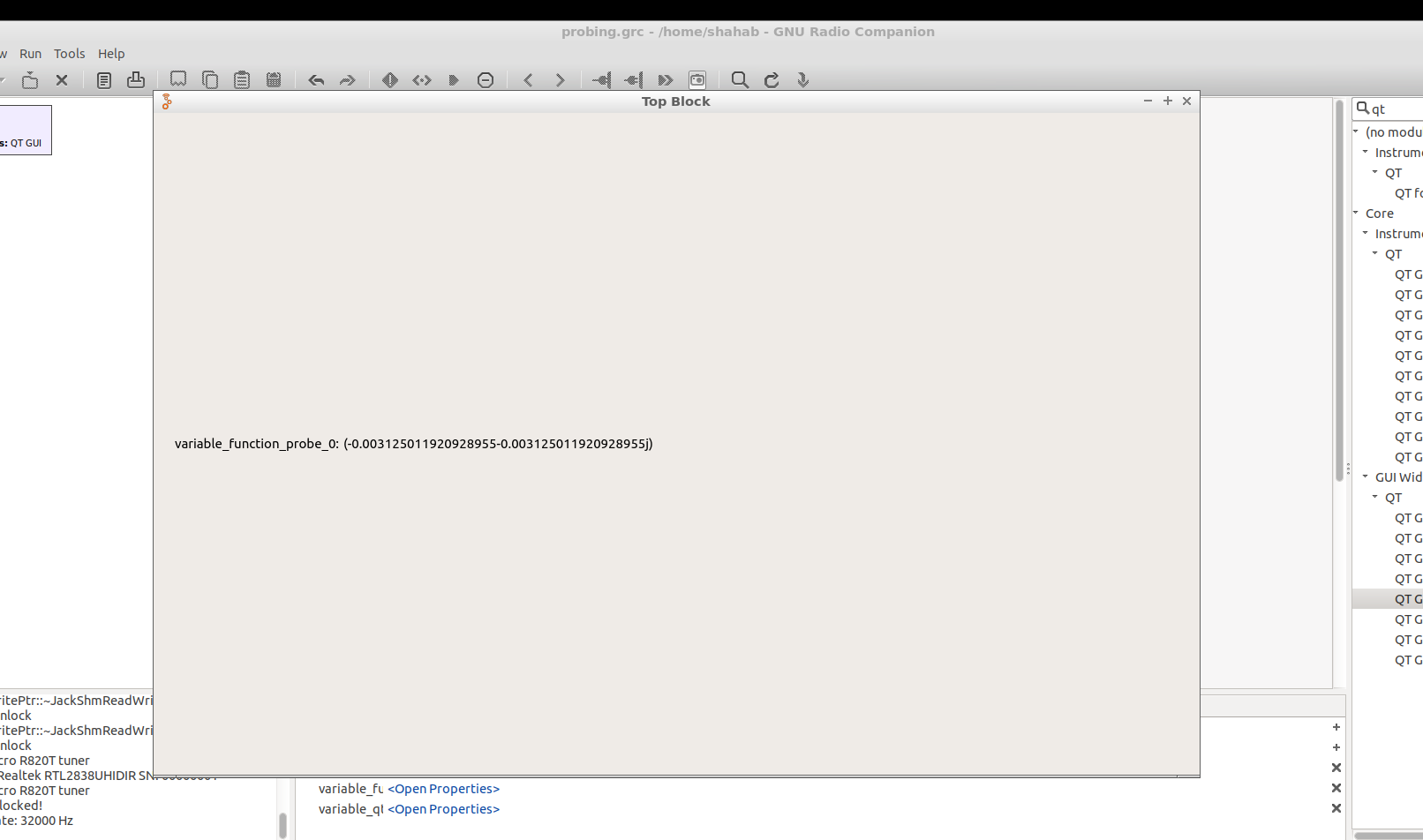 My aim is to write a program that tells me the signal strength of a radio emitting source (I'll use three such sources and then try to triangulate the location).

I've stumbled upon GNU Radio for this purpose (I am using r820t2 dongle -nooElec to receive and fs1000A with arduino pronmini to transmit on 499 MHz).

I've looked into some of GNU Radio docs and found out I can use the companion application to select a source block (osmosdr source for dongle) and direct it to a QT GUI Sink, except that I'd want the output from the source block and do some rssi/signal-strength/decibells to distance calculation on them.

Is there any resource where I can find my answer?

Ok, the probe blocks are not really what you should be using here. In fact, we (I, as architect) should have deprecated them a long time ago – they are really more of a debugging crutch than a signal processing tool.

You could have used the QT GUI Number Sink instead.

Then: yes, your received signal is a complex value – it's complex baseband. (An intro to that. If you're much more math-affine, this book is theory-heavy, good and free. If you're less interested in the theory, and familiar with math at a third-semester engineering level, Software Defined Radio for Engineers is good, and I very strongly suggest it over a lot of the tech-affine SDR literature that's floating around in the amateur radio space.)

The power of that signal is proportional to the squared absolute value. In GNU Radio, there's a block called "Complex to Mag^2", and that is exactly that operation.

You can convert the result to power by using the logarithm.

Proportional means really only that: For any given frequency, gain, sample rate setting of your RTL dongle, there's a fixed factor between power at your antenna and magnitude square of the complex numbers. (Assuming temperature and other environmental factors affecting the analog signal chain don't change.)

To know actual physical units, you'll have to first calibrate your receiver with a source of known power. You don't have one, so you can't.

For your application, however, you don't need that at all – you just need to know relative distances; i.e. it's enough to know that you're e.g. half as far from the transmitter at point B as you were at point A. Add point C and D, and you can calculate a position.

That's possible without calibration: In free-space propagation, power drops with the square of distance, so if your average magnitude square at point A was $x$, it would be $x\cdot\sqrt{2}$ at point B.

499 MHz typically doesn't see a free-space propagation channel; it's already slightly attenuated through foliage, it reflects well off buildings and even better off cars and other metal surfaces, and so you don't really get a reliable square-law when it comes to power drop with distance. So, unless you really have a high-elevated receiver antenna and thus can guarantee a dominant line of sight to the transmitter, this will get pretty inaccurate, and you'll have to use a lot of different measurements and some algorithmic smarts to figure out the true transmitter location based on that.

There's whole industries that sell nothing but solutions for that problem – for way easier things, like estimating where in a mountain range a kW TV transmitter is. So, on level field, this is quite doable, on more complex terrain, you're moving into heavy inverse problem math, and would want a propagation map of the terrain as input :)

Not the answer you're looking for? Browse other questions tagged software-defined-radio rtl-sdr gnuradio or ask your own question.

2
QSSTV/Hamlib and RTL-SDR/HackRF One
2
Gnu Radio with Funcube Dongle SDR
1
How to make a software defined radio using USRP and GRC
2
I want to know how QT GUI Entry is implemented in gnuradio. I am puzzled how the code is like?
3
Why is GNU Radio “stuttering” with this flow graph?
0
How much power does an RTL-SDR draw?
3
GNU Radio - Frequency parameter of Signal Source Block