When using Morse Code as an accessibility/disability communication or input method, are there any non-alphanumeric dot-dash sequences that are more common or more suitable for meta-commands, such as “speak the last string”, “send command string to wheelchair”, or just to enter carriage-returns or capitalize the next letter.

There does already seem to be a common control or meta-command for backspace (6 or 8 dots?)

To move the mouse pointer, send the code once for the direction (up/down/right/left) then the repeat code (a single sip). The mouse continues to move in that direction until either a single sip or puff will stop it. The standard mouse move is set to move 4 mickeys. When I need to be more precise I send the "mouse zoom" code which changes the mouse moves to 1 mickey.

The above website had links to other resources as well. The above seems to be an article "Morse Codes for Computer Access" in Assistive Technology and Electronic Aids for Daily Living.

The "GBoard" software keyboard built into Android since 5.0 offers a Morse code mode, but I have not found thorough documentation. Their training webapp only includes letters A–Z.

A few command sequences are, however, readily apparent via the UI: 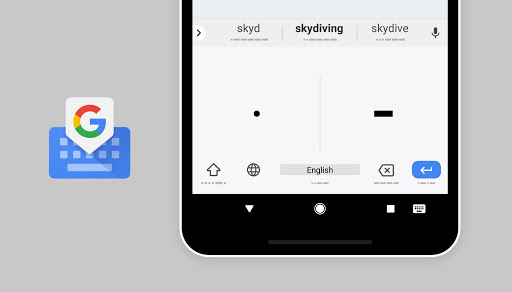 The author of this page seems to have been involved with the development of the GBoard interface, but not very many of her punctuation sequences worked for me when I tried it today.

UPDATE: I may or may not have disassembled a GBoard APK and tracked down its character mapping: https://gist.github.com/natevw/0fce6b56c606632f8ee780b5d493f94e

Not the answer you're looking for? Browse other questions tagged morse-code or ask your own question.

8
Morse Code Key Grease
4
Morse code for hash (#)
4
Is there a preferred order for learning Morse code using the Koch method?
3
Looking for a morse code decoder that simulates keyboard input
2
Morse code help
1
Morse code in a puzzle
11
What is the decimal in Morse Code?
4
Morse Code Tips for B vs. 6 and V vs. 4
0
Google Birthday Doodle Morse Code?
5
Transmitting Morse Code as Tone vs. Carrier