Yaesu FT-450D How to troubleshoot problems with the Keyer jack

I am a big fan of the Yaesu FT-450D but there is one really frustrating quirk that took some time to figure out.

The FT-450 has a keyer jack on the front panel. It is the lower of two 1/8 inch jacks at the upper left. The labeling is not highlighted very well, but can be seen with enough light.

The Yaesu FT-450D User Manual [PDF] describes how to use this jack on manual pages 46-48 in the PDF version, which correspond to pages numbered 44-46 in the printed version.

To enable keyer mode you must first be set to USB and CW modes.

To begin, press the KEYER button. The KEYER indicator lights up on the screen to confirm it. This enables the sidetone but does not activate the transmitter. This is handy in order to confirm your wiring and for practice with the paddles..

In order to use it on the air you press the F button then the VOX/STO button. The BK-IN indicator will light up to indicate that it will activate the transmitter in QSK mode.

When a straight key is plugged with a mono 1/8 inch plug, it generates a side tone for practice.

The jack is touchy, so the plug might need to be jiggled in order for it to work correctly.

To use paddles requires the use of a stereo plug, where the tip is for dit and the middle is for dah, as switched to ground by the paddles. (This can be swapped in software as described in the manual)

So my problem was when I plugged in my paddles. They would not activate the keyer at all.

This particular set of paddles: 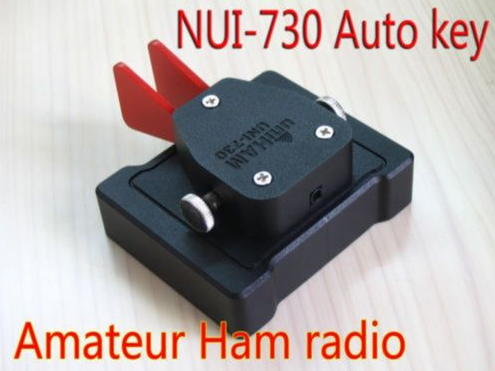 Connected to the rig by an audio-quality male-to-male 1/8 inch stereo pigtail.

There are no menu changes necessary to switch between straight keys and paddles. The radio is smart enough to know the difference.

My problem is that the straight key works fine but the paddles are not responding at all.

Question: How to make it work? I know I have all the correct components.

Turns out that the stereo jack on the FT-450 is very picky about the connectors. Not to say it is a bad design but when it doesn't work it can be frustrating.

The solution was to simply turn the cable around. The radio is not happy with one of the connectors but is very happy with the other end.

Moral of the story: The jack on the radio is not very tolerant of connectors that are not exactly perfect. Jiggling can sometimes help but not always.

Now the paddles are working great with the radio.

This setup works great now. The paddles have non-stick rubber feet and is just heavy enough that it can be used without having to fasten it down.

It helps to use a padded mouse pad for wrist support.

Not the answer you're looking for? Browse other questions tagged yaesu connectors paddles ft-450d or ask your own question.

6
Using standard headphones with the Yaesu FT-60?
2
Yaesu FTDX-1200 how to load band stack register
1
How many independent power settings does the Yaesu FT-897/857 have?
3
Is there a Yaesu BCD code for the 60m band?
3
Yaesu FT-450D CW from computer - DATA and CAT connectors
2
Where is the speaker on the Yaesu FT-857D?
0
Problem with mAT30 ATU and FT-450D transceiver
3
For the FT-60R, does the NC-88B power supply work with the YAESU SBH-13 charging cradle?
0
Does the 450D work with Winlink and allow Winlink to control changing frequencies and bands?
1
FT-450D not transmitting with microphone