Popular amateur radio "below-the-noise-floor" communication modes (such as JT65, et.al.) seem to mostly use FSK, whereas NASA's deep space network appears to use M-PSK for (extremely) weak signal telemetry. Why would one choose one modulation scheme over the other when designing a (new *) protocol for extremely weak signal QSOs?

So using equation 1, we can see that a 50 Hz receiver bandwidth has ~17 dB noise floor advantage over a 2.5 kHz receiver bandwidth. Since the noise floor of a 50 Hz bandwidth is ~17 dB lower, the signal to noise ratio (SNR) expressed in dB improves by the same ~17 dB. This is the same effect we see when comparing the ability to copy an SSB signal compared to a CW signal using a narrower receive bandwidth. But reducing the bandwidth comes at the price of a reduced data rate reaching the limit expressed by the Shannon-Hartley formula:

where C is the maximum channel capacity, B is the channel bandwidth in Hertz, S is the signal strength in Watts, and N is the noise power in Watts.

Regarding the modulation modes, PSK has an approximately 3 dB SNR advantage over other modes. The reason we do not see it commonly deployed on HF is that the standard amateur radio transceiver does not support carrier phase modulation so AFSK or APSK are the only viable means of modulation. If we were to develop special purpose HF transceiver capable of supporting carrier PSK modulation, we could capture an additional 3 dB of SNR.

MPSK reduces the complexity of the receiver since there is no requirement to acquire/track the carrier as there would be with PSK. Here is a synopsis of a decoding technique described in IEEE Transactions on Communications (ISSN 0090-6778); 38; 300-308:

We'll have to lay down some rules for the comparison:

If we consider just binary phase shift keying or frequency shift keying, PSK wins handily. You can even halve the symbol rate and use 4-PSK, and get the same performance as 2-PSK in half the bandwidth. The bit error rates for binary PSK and coherently detected1 binary FSK are:

Where $N_0$ is the noise spectral density, $E_b$ the energy per bit, and Q a scaled version of the error function:

Note the $2$ in the $2E_b$ factor of equation 1 means transmitter power goes twice as far for BPSK.

4-PSK has the same BER as 2-PSK: it is effectively 2 orthogonal 2-PSK signals. It's easy enough to understand intuitively, examining the constellation diagram: 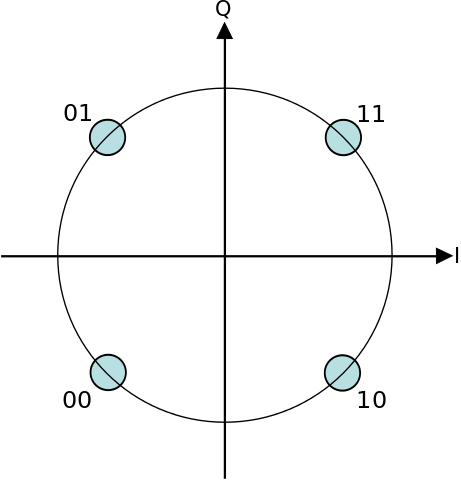 Orthogonality is key. Taking this idea further to 8-PSK results in an increase in BER since the symbols are no longer orthogonal.² 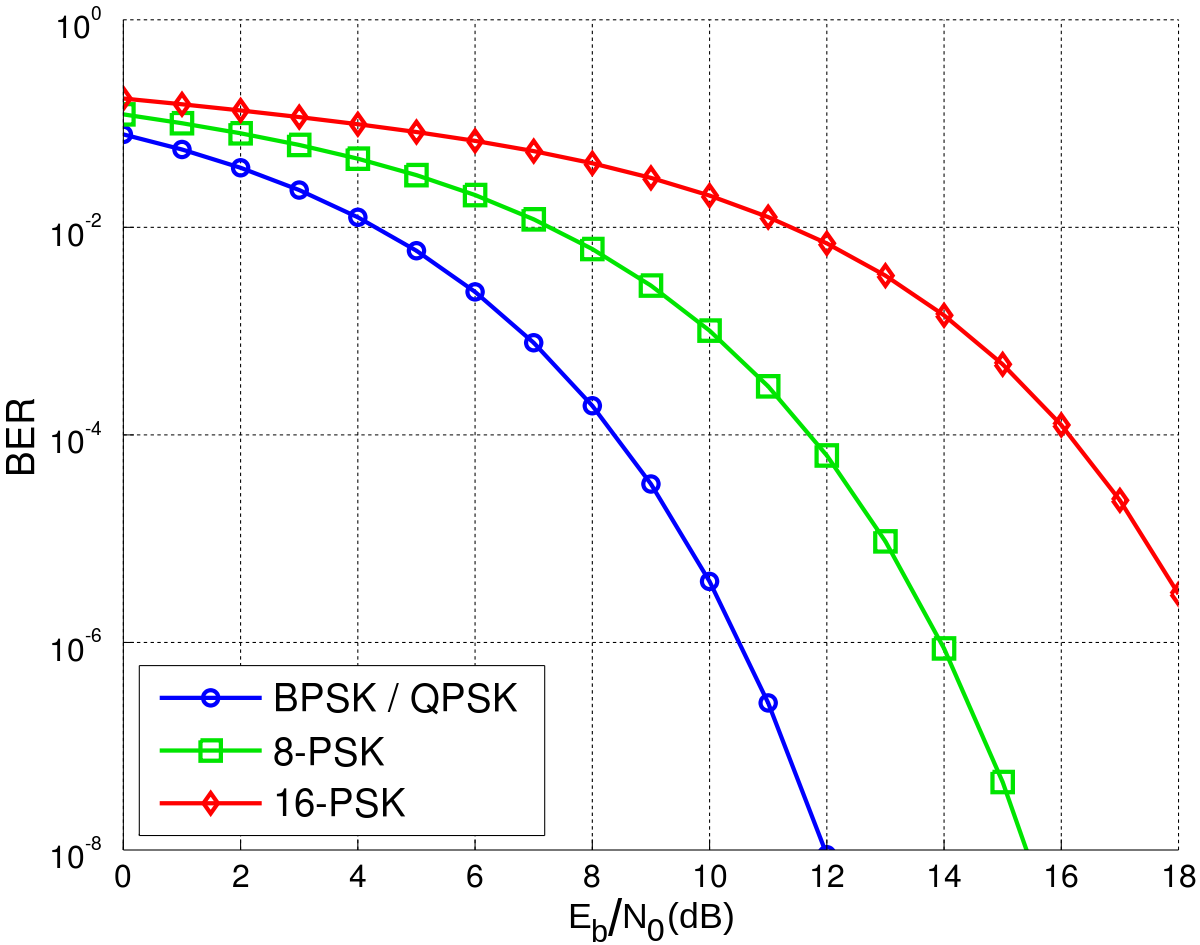 Now back to FSK. With binary FSK there are two tones, each conveying a 1 or a 0. But as with PSK the order can be increased: if we have 4 tones, each maps to two bits. With eight possible tones, a single tone conveys 3 bits.

With PSK, as the order was increased the bandwidth went down and the error rate went up. With FSK the opposite happens. This is because unlike PSK, with FSK we can add more tones while retaining orthogonality, provided there's sufficient bandwidth to space them apart.

Why does this work? Imagine a receiver that looks at a single frequency and has to decide if a tone is present there or not. At some transmitter power and tone period this will work reliability, and each period communicates one bit. Say tone present = 1, and absent = 0.

Now if there are 16 such receivers, the detection of a tone present communicates not one bit but four (there are sixteen possible combinations of four bits). The more possible tones, the more bits are communicated per tone, with no additional transmitter power.

Or equivalently, we could slow the symbol rate but hold the bit rate constant, putting more time and thus energy into each tone and making it easier to detect. Conveniently, decreasing the symbol rate also decreases the minimum spacing between the tones to maintain orthogonality. 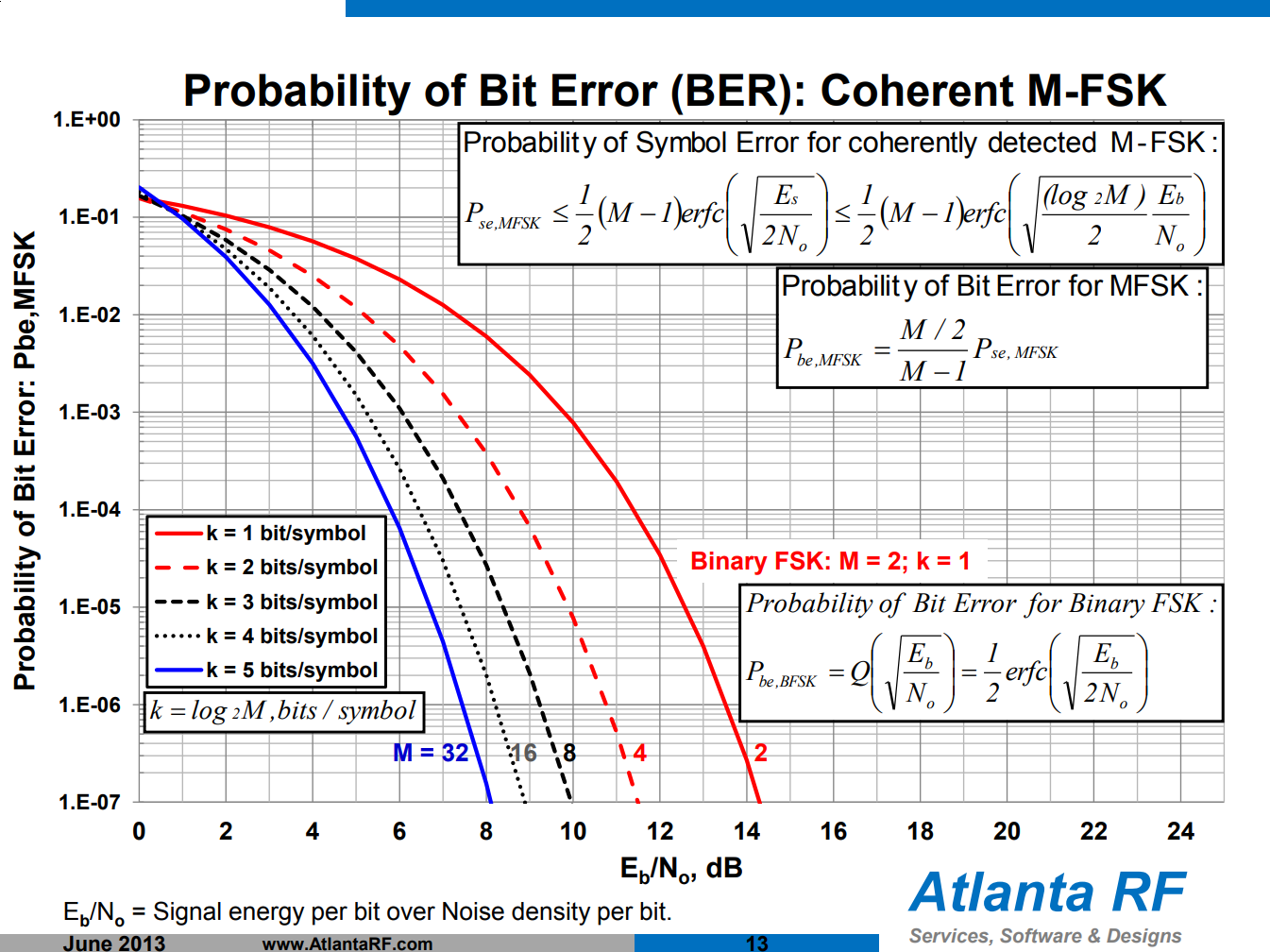 The weak-signal performance-enhancing properties of wide bandwidths are reflected in the (modified here to assume white Gaussian noise) Shannon-Hartley theorem:

So while increasing the bandwidth does decrease the SNR term, it increases the $B$ term faster.

1: Coherent FSK detection is the most complex, and most accurate method of detection.

2: However, it does improve spectral efficiency. Many applications are bandwidth limited, so higher-order constellations are popular. For example, Wi-Fi uses at the higher data rates 64-QAM to cram the highest bit rate possible in the limited bandwidth available.

Not the answer you're looking for? Browse other questions tagged modes or ask your own question.

13
What is the role of digital data modes in emergency communications?
4
What is this short, wide band signal?
7
What should be the modulation when transmitting APRS signal?
3
How to reverse engineer a proprietary FSK protocol
5
Air gapped digital communications mode on VHF?
1
transmitted FSK, sniffed something PSK-looking
1
overly large bandwith for a FSK signal?
0
Both OOK and FSK used in the same transmission
1
Why do PSK modes have "bandwidth"?