Note: Answer only for the level of Class 12 students required.

I seriously do not know anything about the last two questions. Any help would be praised for the one who will solve all these three questions.

So, I'll take this very smoothly. The idea is to take you from ray optics gradually to an understanding of radiomagnetic waves as actual waves, and show that it all makes sense.

We remember what happens when we have ray of light, leaving a optically denser medium (e.g., water) into a less dense one (e.g. air): 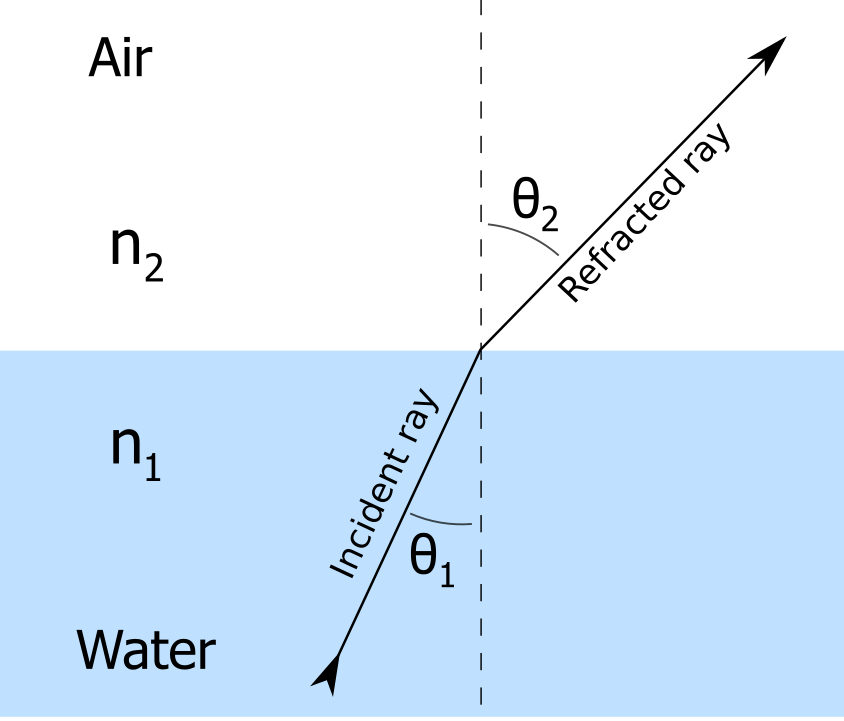 The ray is refracted away from the normal of the interface (image taken from wikipedia's refraction article & cropped).

We can actually calculate how $\theta_1$ and $\theta_2$ are related; it's Snell's law that you might already know:

with $n_i$ being the refractive index of the medium (air or water).

2nd idea: Water on a sphere

Now, imagine you're standing on sphere (like, a planet). Your planet is completely covered in very very salty water, and above that, is air.

You're of the water-dwelling kind, and you hold an orange laser pointer nicely horizontally: 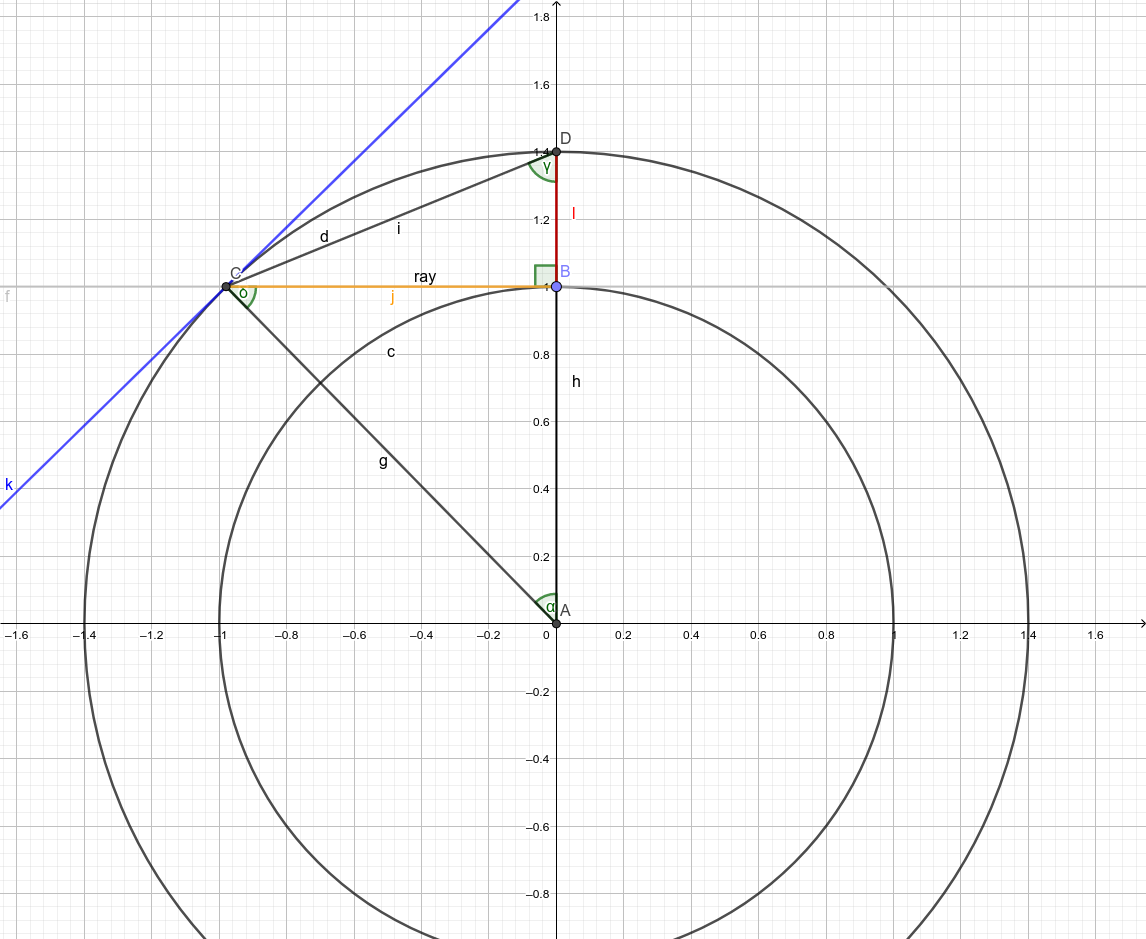 So, in this drawing, you stand at point $B$, and hold your laser pointer straight vertically (that is, perpendicularly to the planet radius $\bar{BA}$. At point $C$, the ray hits the saltwater-air interface in the angle $\delta$.

Our job is now to find $\delta$, because we know the refractive indices of air and saltwater, and we can then calculate under which angle the ray will leave the saltwater¹.

Now we realize that this ocean is pretty deep, and that the water isn't constantly salty – the deeper waters are way more salty than the waters close to the surface.

Let's even think these different degrees of saltiness come in layers. Then, we can imagine there being a lot of interfaces like the water-air interface from the second idea :)

Since salty water is at the bottom and has a higher refractive index than less salty water, we get such a bend at every interface. The ray is getting bend more and more to "hug" the spheres, until, at the end, it practically "rides" on a circle-like shape that it really can't leave (because it's always refracted back a little bit more).

4th idea: From rays to waves

Now, the first big thing to simply swallow is: Laser light and, let's say, mediumwave radio broadcast, are really just the same thing: electromagnetic waves. There's zero difference between them, other than that an orange laser has maybe a wavelength of 600 nm, whereas your medium wave broadcast might have a wavelength of 600 m, that is, one billion of the wavelength.

So, whereas the saltwater layers seem "huge" to a ray of light, which you might have already learned to model as "plane wave front", these layers might be "small" compared to the wavelength of a medium wave transmission.

Now, imagine that instead of a small, cute laser pointer, you used a giant lamp consisting of thousands of laser pointers, mounted atop of each other: A large "tower" that shines kind of a beam (consisting of many laser rays). Now, the lower laser pointers are in deeper, saltier waters, and get bent more within shorter distance than the upper ones.

There's an old analogy that physics teachers often employ: imagine this group of rays being a marching band, nicely arranged to all start marching at the exact same instant. While the upper-water band members move relatively straight and only rarely meet a water-water level interface, the band members close to the ground are often making a bend in their path. The overall front of the marching band seems to "slouch" around the curvature of the earth.

This analogy isn't as bad as it sounds at first: The refractive index $n$ is actually just a measure for how much slower than in vacuum the light is in that medium. So, the "deepwater rays" simply are slower than the "not as saltywater rays". That means that the whole wavefront (marching band front) does follow a curve.

5th idea: we don't have salty water, but earth will do.

Obviously, you're not a water-dwelling alien controlling a giant marching band consisting of laser beams.

Instead, you have an antenna. But that antenna very much sends out an electromagnetic wavefront. As electromagnetic waves permeate air, trees, hills, dry earth, not-so-dry-earth, small animals, large animals, buildings, tapestries and people, they are, just like the special case of visible light, slowed down in media.

In the case of ground waves, the lower parts of the wave front permeates earth. Earth has a higher conductivity as air – and that means it slows down the electromagnetic wave. How that slowing down happens isn't actually very easy to explain - in the end, earth has physical properties that increase its $n$.

¹ I haven't had the time to properly test my calculations, but if they are correct, that angle is, if we set the earth radius to 1, $\delta=90° - 2\arcsin\left(\pm \sqrt{\frac l{2+2l}}\right)$, but that's actually not that important here. If you want to have some geometry in your presentation, deriving that angle from the ratio of earth radius (set arbitrarily to 1) and water height would definitely be a cool thing.
For the things I want to explain, it's not important what this angle is, exactly.
Share
Improve this answer
answered Feb 7 '18 at 14:09

The sections on the propagation of radio waves included in the Radio Engineers' Handbook 1st Ed., 10th Impression (1943) by F. E. Terman present a detailed analysis of this subject which may be useful here. A clip from it with his opening comments about "wave tilt" is shown below.

A Google search will identify sources for this complete textbook in printed form; possibly even as a free download in PDF format. 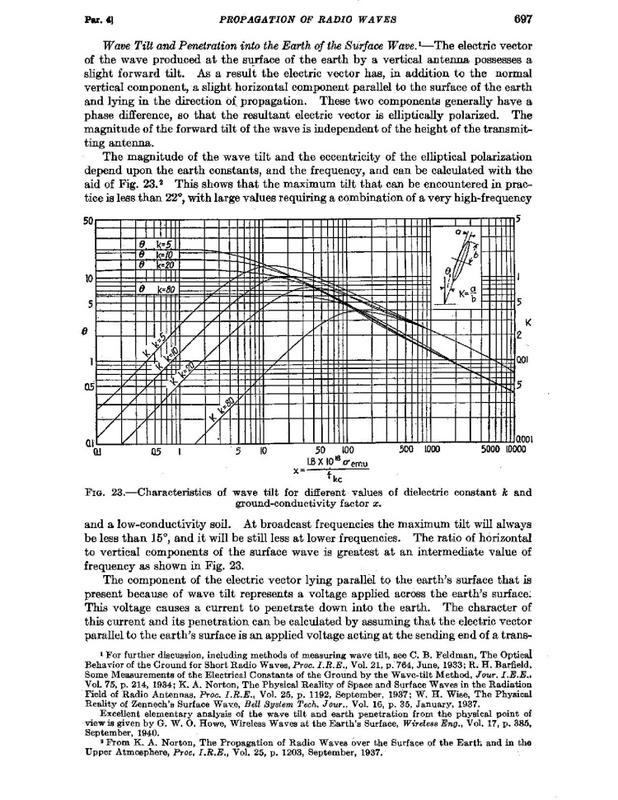 Not the answer you're looking for? Browse other questions tagged antenna propagation or ask your own question.