Prompted by a previous question found at Using a balun with a resonant dipole -- an answer there included the following text:

A sketch included in that link (repeated below), and the comments about it there are unclear as to how the common-mode r-f current flowing on a braided outer conductor of a perfectly terminated coaxial cable always is confined to the inner surface of that braid.

"Skin effect" keeps most of the r-f current flow very close to the surface of a conductor. But in a braided conductor, what prevents that current from being distributed ~ equally around the circumference of each unit conductor of that braid?

If it was/is, then wouldn't the outer surface of that outer conductor always be "hot" for r-f energy, just as are both conductors of twin-lead transmission line?

It is understandable that r-f current flowing on the inner surface of the outer conductor of rigid coaxial transmission line could not cross to its outer surface until functional paths existed for that purpose, usually at the load end of the line. 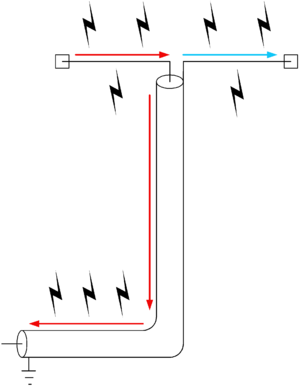 A differential-mode current on the shield is always found exclusively on the inside surface of the shield, even if there are holes. It's not due to the current being trapped inside, but rather that it wants to be that way due to eddy currents, the same mechanism behind skin effect.

Imagine a primary current flowing through a solid, cylindrical conductor. Let's pretend it's a uniform current through the entire cylinder. 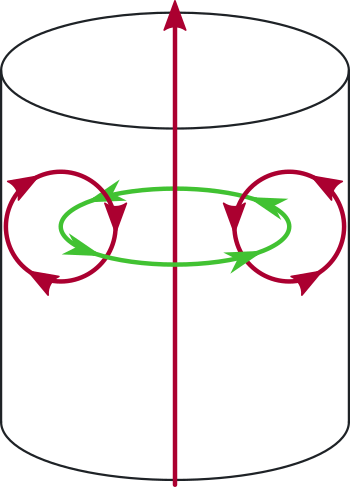 Because this is an AC current, that magnetic field is constantly changing. This in turn induces eddy currents (red circles) by Faraday's law of induction. The left-hand rule determines which way they go. 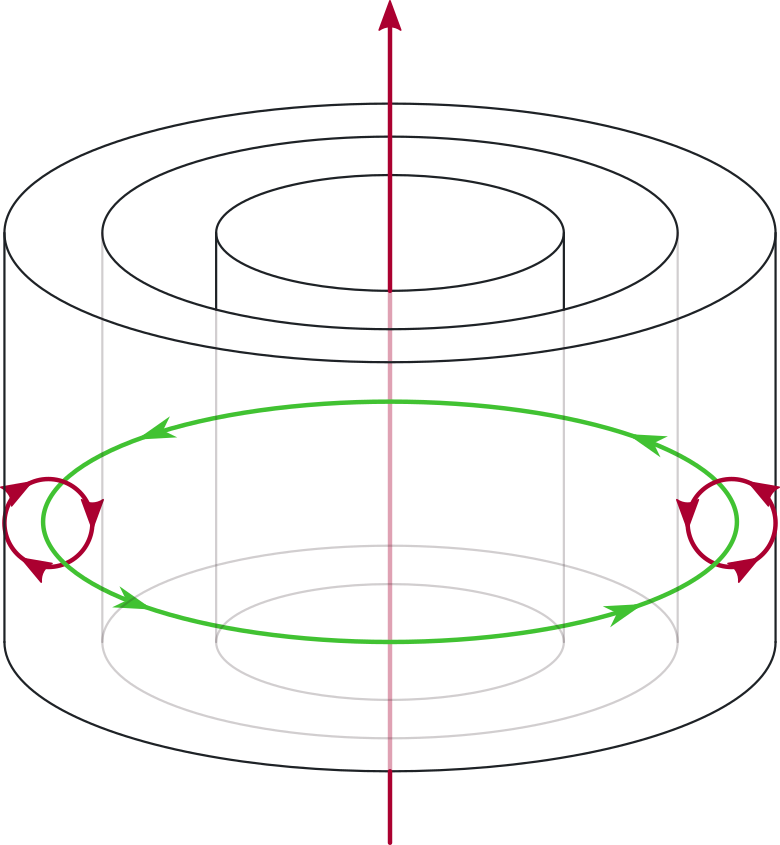 This is why differential mode current is on the inside of the shield. It's not because it's "trapped inside" by skin effect. Rather, it doesn't want to get out. Eddy currents give rise to skin effect which describes a single conductor. When there are two conductors the interaction between them must be considered.

The tendency for currents in two nearby conductors in opposite directions to have the highest current density in the regions nearest each other is called proximity effect. We see this not only in coax, but also in balanced transmission lines and transformer windings:

When the currents are in the same direction, the opposite occurs: the current density is highest in the regions furthest apart. This is why skin effect can't be circumvented simply by making a thicker wire from thinner, individually insulated strands.

It's because of issues like this I find the "skin effect" or "three conductor" explanation of coax unsatisfying. It leads to a mental model of demons trying to get out and wreak havoc, contained by a magic skin effect barrier. What if there are holes in the barrier, as in the braid? Do the ends need to be sealed? Instead I find it more intuitive to think of the equal but opposite fields of the shield and center currents cancelling each other. This leads to a better intuition about what's required to prevent coax from radiating, and it works with balanced transmission lines also.

Quick answer: No. And when it isn't, it's called common mode current. Common mode current is typically induced by external fields between the coax shield and other objects (like the antenna), rather than the RF current injected into the end of the cable.

Common mode current can be blocked by chokes/baluns, or discouraged by careful symmetrical arrangement of the coax and antenna.

Assuming decent coax that is properly terminated, and where the braid is not corroded and the strands are in good contact with each other, any small holes in the braid act like a waveguide below cutoff. Therefore, any radiation from the braid is usually inconsequential in amateur practice.

Having said that, in some cases there can be some radiation and/or some unwanted signal ingress. That's one of the reasons for double- and quad-shielded flexible coax (or solid shield coax).

Of course, if the unbalanced coax is connected directly to a dipole without a suitable balun, we will then have common-mode currents flowing on the outside of the shield. The shield will then radiate (as shown in the graphic) a significant signal, as well as pick up unwanted RFI, etc. whether the shield is braided or solid.

Not the answer you're looking for? Browse other questions tagged coaxial-cable balun theory or ask your own question.

39
Using a balun with a resonant dipole
9
Does a balun need to be made with coax?
8
Why must twin-lead conductor spacing be small to avoid radiation?

10
How do I design a round or square coaxial transmission line to have a specific impedance?
5
Connect Printed Yagi-Uda Dipole Array with Balun to coaxial cable correctly
6
Understanding coax radiation and "current on the shield"
3
Using inner conductor of a coax feedline as an antenna
9
Does a balun need to be made with coax?
5
For air coax calculation, what is correct diameter metric vis-à-vis tube stock thickness?
2
Current flow in a coaxial cable
0
Terminating double-shielded coax
3
Trying to understand the work of 4:1 coax balun
2
Is a balun really necessary for a small loop antenna?