How Does the Performance of Elevated Radials Differ from That of Buried Radials?

NEC4.2 provides some information about this topic that may be of interest to some readers.

The number of horizontal radial wires used in an elevated "counterpoise" can be far fewer than the 120 buried wires used by most AM broadcasters, and the even fewer numbers of buried wires often used with vertical monopoles, inverted Ls etc by amateur radio operators.

Several AM broadcast stations use 3 or 4 pairs of λ/4, co-linear, horizontal radial wires installed 10-15 feet above the earth, spaced equally from each other.

Monopoles using such elevated radials can have elevation pattern peak directivity and measured radiation efficiency about equal to that when using 120 x λ/4 buried radials (other things equal). Wire conductors connecting the antenna system to the earth are neither needed nor used to achieve this performance.

The reason such broadcast stations installed elevated radials is almost always related to the nature of the earth at the transmit site -- typically too rocky to permit using buried radials.

Below is a NEC4.2 comparison of the patterns/directivities of a λ/4 monopole for the configurations and conditions shown there. 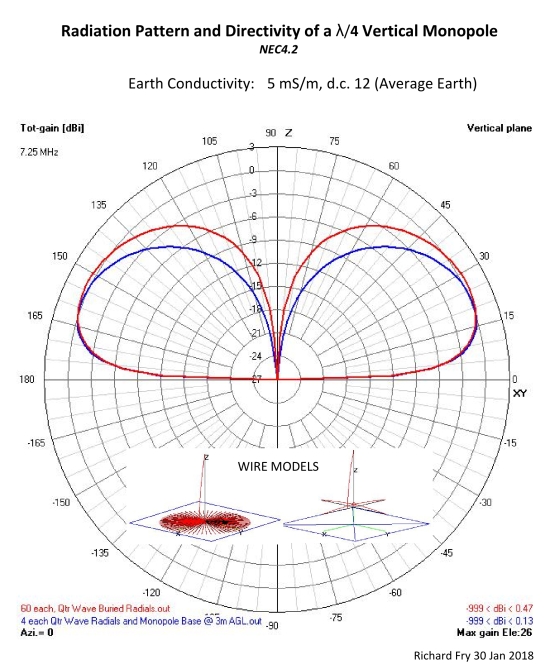 Another analysis of this is shown in the more recently done study/graphic below.

Note that the performance of these antenna systems when installed at sites with relatively poor Earth conductivity is fairly similar. 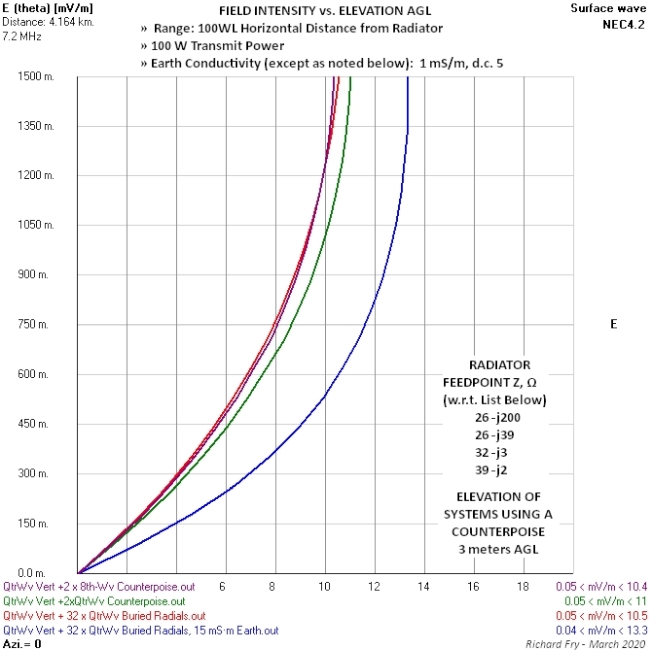 Not the answer you're looking for? Browse other questions tagged vertical-antenna earth counterpoise .

2
How Do Ground-Mounted Verticals Compare to Elevated Verticals?
3
How low can a vertical dipole be mounted?

9
When and why does the size of a ground plane or radials matter?
4
How Does Earth Conductivity Affect the "Takeoff Angle" of a Vertical Monopole?
2
How Does the Low-Angle Radiation of a Horizontal Dipole Compare to That of a Vertical Monopole?
5
Size of ground plane disk for vertical antennas?
2
Do Buried Radials for Vertical Monopoles Need to be No Longer than the Monopole Itself?
1
How Does the Propagation of H-pol E-M Fields Compare to That of V-pol E-M Fields (other things equal)?
1
Does Improving Earth Conductivity Near a Buried Ground Rod Improve Antenna System Performance?
2
What do radials really do for a vertical antenna?
4
How does the material of a fishing-pole mast affect antenna performance?
1
Using Decoupling Stubs to Allow a Vertical Yagi to be Mounted on a Metal Pole