Can a vertical antenna be used for NVIS?

I know that verticals are normally chosen for their low angles of radiation without obscene heights, but I'm not especially interested in DX and am primarily looking for local coverage via NVIS. I've not had great luck with dipoles at my home (parallel 5kV power lines under a wavelength away for 20m and below, I think, are the reason here). I was reading an old question and saw an answer that talked about using a vertical for NVIS, which I've never heard of.

Knowing that 1/4λ verticals are known in VHF/UHF applications to have nearly isotropic patterns, I'm not sure how to reconcile that with the "verticals are great for DX" thing for HF. What gives and how can I do 160/80/40m NVIS with a vertical?

This is not a valid assertion. A UHF/VHF vertical antenna has > 0 dBi gain (more succinctly a directivity >1) so by definition it cannot have nearly an isotropic pattern. Its primary directivity is toward the horizon at about a 22 degree elevation (although highly dependent on the the ground plane and the elevation of the antenna).

You cannot reconcile it because the two conditions are not both true. A well constructed vertical antenna will have its primary gain toward the horizon which is what gives it its desired DX characteristics. A 1/2 wave dipole antenna needs to be mounted about 1/2 wavelength above ground to achieve a similar effect.

NVIS with a vertical antenna is not a practical application as @mikewaters points out. The general concept for NVIS is to erect an antenna that directs most of its energy "straight up" so that the atmospheric reflections come back to earth in close proximity to your station. The vertical antenna actually has a hole (negative gain) in its pattern in the vertical direction.

I've not had great luck with dipoles at my home

It would be helpful if you could give a more complete description as to what this means. That could be a starting point for getting your NVIS station working properly.

If you want NVIS (predominately high-angle radiation, for closer-in stations rather than DX), then you don't want a vertical.

I have used inverted-L antennas with great success. The majority of the radiation is vertically-polarized at low angles (great for DX). However, there is enough high-angle radiation from the horizontal, sloping section to work closer-in stations. See this page about my 160m inverted-L. It was built for 160m, but I was amazed at the performance on 75, 40, and 20 meters.

If the installation site permits, a dipole antenna in a vertical "Vee" configuration has radiation patterns suitable for NVIS applications -- and can have useful low-angle radiation, as well.

The graphic below shows its performance on the 40/80/160m bands for the conditions shown there.

Directivity ("gain") is highest in the 40m band, and feedpoint Z is more difficult to match to 50 ±j0 Ω on the lower bands. 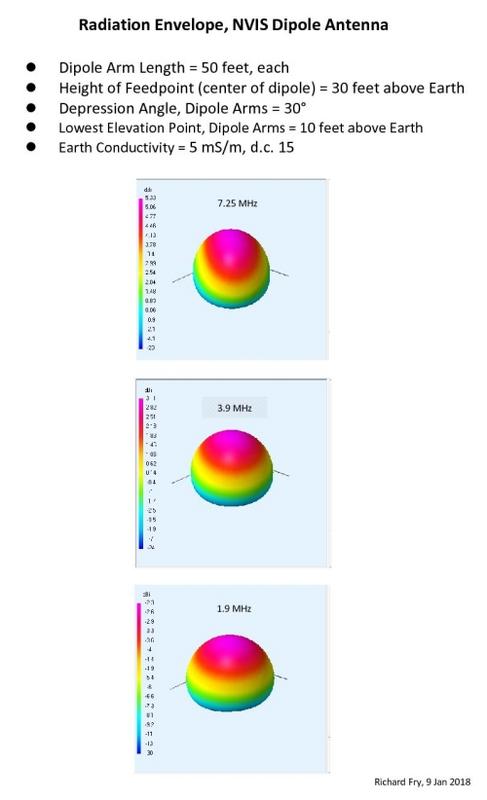 As my answer is quoted in the OP's question, let me elaborate.

Specifically on my T-antenna with auto tuner at feed point/base, as the OP left a recent comment asking about this antenna, hence the focus of this antenna in this answer.

It is a T-antenna, which means a vertical radiator 10m high, and a top-spanning 30m horizontal at each end, originally built for 160m and 80m. It resembles a T, hence I call it my T-antenna, I do believe this is an accepted term though.

Using it over the last 3 years, I get reasonable DX performance for 160m and 80m. Due to the vertical aspect of the antenna.

However the auto tuner is capable of matching this antenna for 40m, and I discovered that it has some NVIS properties for 40m, this is probably due to the 2x 30m horizontal legs of the T-top.

Discovered by accident, but it did allow me to use this antenna for NVIS 40m to the extend that I do not use my horizontal dipole all that much anymore.

However, it still spans 60m horizontally, which is actually more than a 40m dipole. So if you are space restricted, this would not be an ideal antenna for NVIS purposes. Its main purpose is still 160/80m DX.

Just to be clear, I built this antenna as an experiment, and decided to keep it. There were no scientific designs involved, nor modelling. I could go up 10m, so I did, I could go wide 30m at each side, so I did. I put an auto tuner at feed point, and I played radio. That is all, so if looking for a scientific answer for T-antenna's which are designed for band X, but have properties on band Y, then this is not your answer. For more scientific calculations of a T-antenna, you can see this page although originally written for the 136kHz band.

Not the answer you're looking for? Browse other questions tagged vertical-antenna nvis or ask your own question.

6
What is the attraction of vertical antennas for HF?
3
Using two short mobile HF antennas to make a vertical dipole

6
How to determine antenna height for given HF frequency and coverage radius?
3
Antenna Tripod for a vertical antenna
3
Corrugated Metallic Roof used as a ground-plane for short loaded vertical?
7
calculating all specifics for a 5/8 antenna
1
vertical 40m antenna takeoff angle
2
Why SWR significantly changes with adding 10-30 meters of coax in presence of RFI choke?
6
Multiband vertical antenna not working as expected
1
Vertical antenna
2
What Are the Properties of 43' Vertical Monopoles Used as Multiband Radiators?