I have a couple of end-fed wire antennas I bought that came with matching baluns. One has a 9:1 unun, and I'm not sure about the other one. In addition to those, should I also put a choke balun on the coax before the matching one?

End fed antennas have become quite popular in recent years, primarily due to their convenient installation conditions. Many people subjectively report good results from the antenna. But how the antenna works is not often well understood.

The other anomaly of an end fed antenna is that there is only one apparent connection to the antenna. The coax and transmitter, on the other hand, require that current flows in equal and opposite directions. While the unun contributes somewhat to this requirement, in most installations the balancing current actually flows on the outside of the coax shield. Due to the skin effect of RF, this is a completely distinct current from what is flowing on the inside of the shield of the coax. This is sometimes called the third wire of the coax. Thus the coax often forms part of the radiating antenna. Normally we try to avoid this condition but without any other form of counterpoise, it is nearly a requirement to make this type of antenna work reasonably well.

Placing a choking balun at the feedpoint of the antenna may be counterproductive for many end fed antenna arrangements. On the other hand, it is not desirable to allow the current that is flowing on the outside of the coax to enter the shack since this can lead to RFI while transmitting. Often a good compromise is to place a choking balun on the coax just before it enters the shack.

I cannot speak to the off-center type dipole feeds that use the 1:9 (impedance) transformers, but for the truly end-fed dipoles fed with something like a 1:49 impedance ratio, the answer is, it depends.

I performed some simulations of an end-fed dipole system with an autotransformer and an additional wire representing the currents along the feed line. I did so with the wire open ended and with a couple 1/4 wave radials to represent both ungrounded and grounded situations. In the article I look at SWR, Return Loss and antenna gain in the axis of only the antenna radiator. All tell the same story, but gain gets the nod to view for this answer... 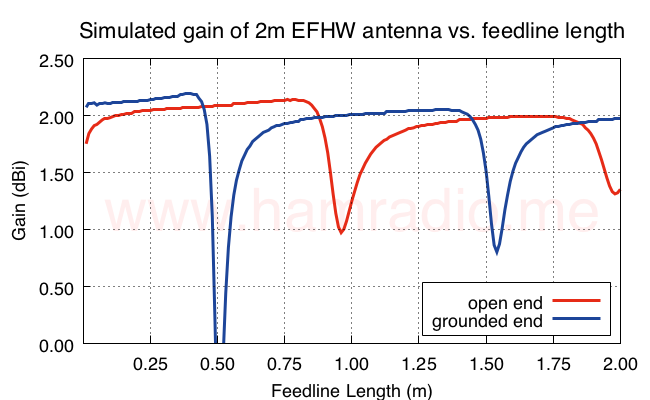 So to answer your question if the feedline is under 1/4 wave in length, there appears to be no reason for a current choke. However, if you have lengths 1/4 wave or longer, it may be time to add one... but where?

If my simulations are correct, placing the high impedance of the choke 1/4 wave back should provide protection to the system for any length of feedline past the choke since the choke always forces a low impedance (1/4 wave transformer) at the feed point that is very dissimilar to the high impedance feedpoint. This odd phenomena is reverse of the case of a center-fed dipole or 1/4 wave monopole.

This is what simulations and a growing set of measured data suggests.

Not the answer you're looking for? Browse other questions tagged balun end-fed-antenna choke-balun or ask your own question.

9
Does a balun need to be made with coax?

39
Using a balun with a resonant dipole
4
Dipole versus ungrounded end fed for HF RX
9
Does a balun need to be made with coax?
2
Turn 75 Ω TV “Rabbit Ears” with a balun into a 50 Ω dipole antenna
6
Coax or bifilar windings for a choke?
2
Voltage vs. Current Balun for Dipole
4
Dipole increased CM current using choke balun
2
Rotatable Dipole & RF Choke
3
What is the radiation pattern of an ~60 foot end fed wire antenna used for 40 meters?
0
Pondering variations on the vertical bazooka antenna