I just built a UHF Yagi antenna for my HT, and I was thinking about adding VHF elements. If I do, could I just connect the coax directly to both sets of elements without a diplexer?

The diplexer allows you to separate the UHF and VHF signals coming from the radio. This is useful if, for example, you wanted the uhf antenna and vhf antennas in different places or pointing different directions. Or, if you had both antennas connected together on the same coax, but you wanted to feed them from different radios on the other end of the coax.

If both antennas are in the same place, a diplexer on the antenna end doesn't make much sense.

Putting them on the same coax should work fine. Generally, if the one antenna has high SWR at the other antenna's frequency, then this will act as a selector of which antenna gets most of the power from the coax at that frequency.

If one antenna is a harmonic of the other, the power could be divided between the antennas (like a voltage divider made of resistors), which could change the impedance significantly, and you might need to adjust the matching network, and the radiation pattern would be from both antennas. Also, if the antennas are close, they might interact distort their mutual radiation patterns even if they are not sharing the power. These two factors can be designed for, or you can just try it and see how it works.

Note that the 440mhz band is very close to being a third harmonic of 146mhz, so a 2m antenna with sufficient bandwidth might also have low SWR on 70cm. If this is an omnidirectional antenna, you might not even need the 70cm antenna. If this is a directional antenna, you might want the diplexer to separate the antennas to get the best radiation pattern for each band. Note that the arrow satellite yagi has the two antennas on the same boom, but mutually perpendicular -- this minimizes interaction between them.

It is possible to design a dual band antenna using a single driven element in order to avoid the use of a diplexer (note the correct term for this device).

On 2 meters, the driven element is ~1/2 $\lambda$ long and on 70 cm it is ~3/2 $\lambda$ long. Each band has its own reflector and director elements. An example of a commercial antenna built on this concept is the Hy-Gain DB-2345. You can download the manual here for this antenna to get a good idea how it is constructed

A home-brewed version of this type of dual band antenna can be found on DK7ZB's web site http://www.qsl.net/dk7zb/start1.htm 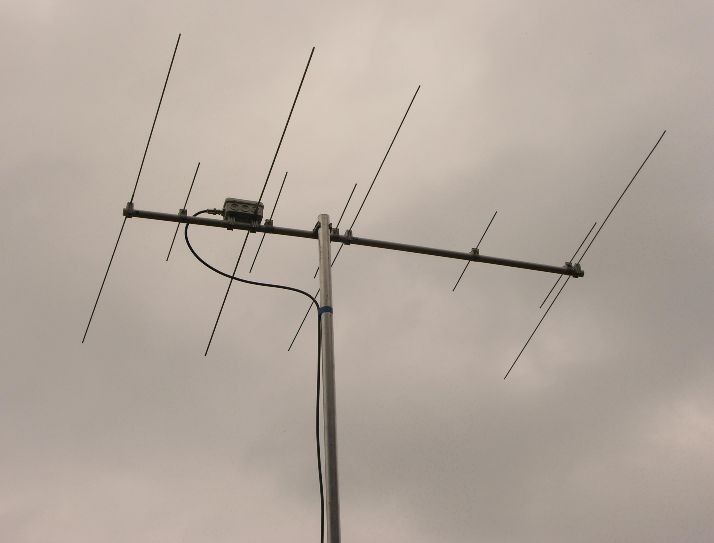 Of course if your interest is FM communications, you can orientate these antennas vertically, preferably using a non-metallic mast.

That is completely your choice. It depends on whether you will use one radio or two.

Since certain VHF/UHF radios are so inexpensive I can use two at a time by connecting to each yagi separately to yield full duplex - so I can hear the satellite or Space Station as I transmit.

I believe what you are asking about is similar to the antenna I use - UHF and VHF on the same boom and used with a single radio.

Here is mine: The Alaska Arrow antenna 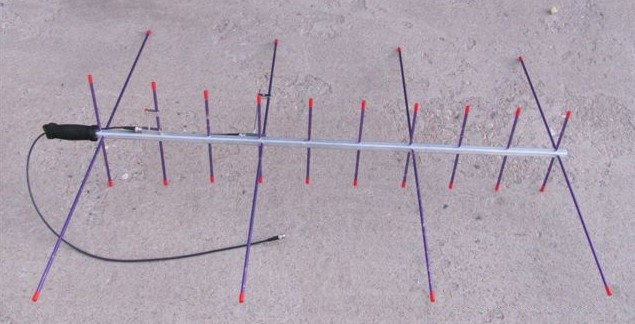 (This picture shows it without the extended boom and elements attached)

This one uses a duplexer for use with a single radio - it is located in the handle. 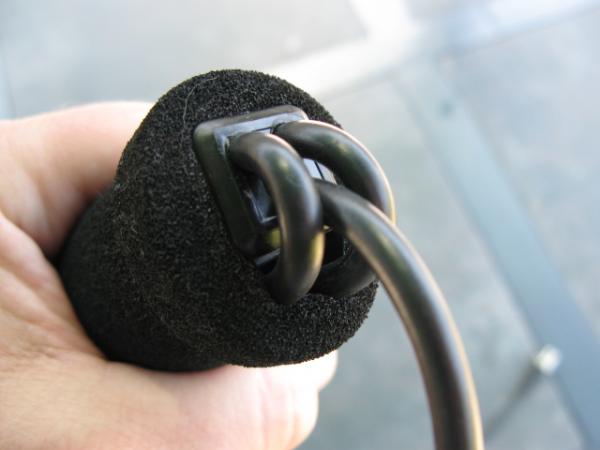 This antenna can theoretically handle 150 Watts without the duplexer - but I find 5 is sufficient, especially when using the full-length version with all the extra elements.

Mine is mounted on a microphone stand that allows me to rotate it for polarization as well as adjust the position to track satellites and the Space Station while adjusting for their orientation as necessary.

Meanwhile I am also busy during the pass as I adjust for doppler on the transceiver. I used 3 channels. One for AOS, the next for the middle, then the third as it nears LOS.

I also have a low-power red cross-beam laser on the front of mine to help keep the direction steady along the track.

Word to the wise: Never use a green laser if you are pointing it upwards. Green is where the eye is most sensitive and it could distract someone.

Not the answer you're looking for? Browse other questions tagged antenna antenna-theory vhf yagi .

3
Spacing between elements on a Yagi antenna
3
Dual-band yagi on single beam: element positioning
1
What is the best type of feedline for a base UHF VHF ground plane antenna with a distance of around 50-75 feet of coax?
3
Weakly directive VHF/UHF antenna
2
VHF 50 Ω Antenna Over 75 Ω TV Coax
2
Can I build a Yagi antenna for my Baofeng UV-5R?
0
Outdoor Terrestial Digital TV Receiver Antenna: 500-700 MHz Band, Can I Make It Work Better?
1
Yagi performing far worse than a dipole
3
Dual Polarization Yagi Antenna for 10 m
0
Dual driven-element Yagi-Uda antennas