Is there a way to use a Bluetooth headset with my transceiver to eliminate all the wires, like a Bluetooth adapter? It seems like all the Bluetooth applications require a smartphone in the loop somewhere, and I don't have one.

Cobra makes a very adaptable Bluetooth headset/microphone that has a 10 hour talk time. The radio side of the device has a four pin connector that is easily adapted for most amateur radios. It comes with a remote PTT switch but if your radio supports VOX operation, it will typically work with that also.

A real bonus with this device is that it can simultaneously mate with your phone via BT and you can switch between the phone and the radio from the headset. This is completely optional as the headset can be used directly with the radio without requiring the use of a BT phone.

These are widely used in the trucking industry and have a very good track record. It is regularly available on the Internet for $70. 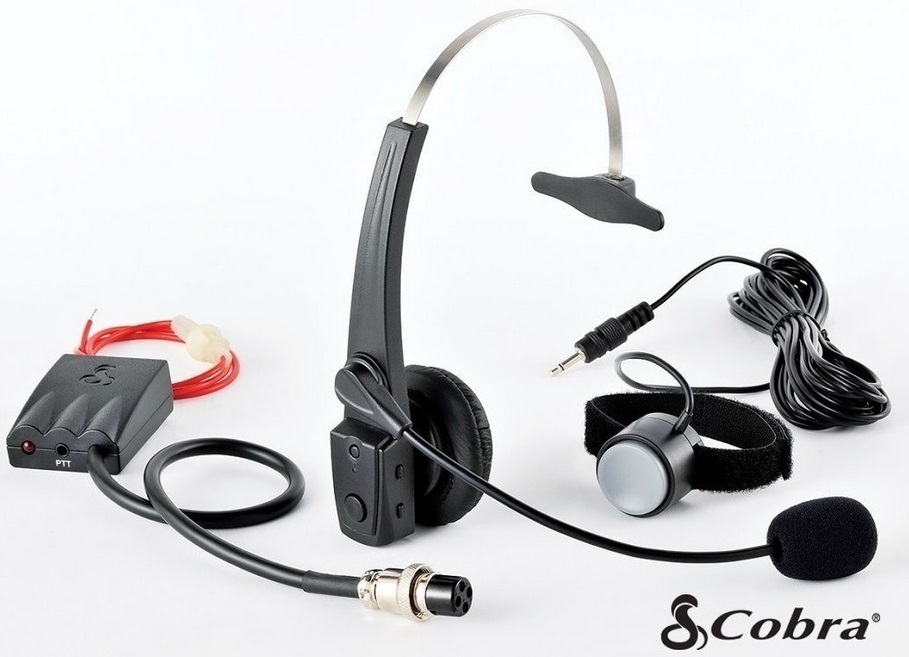 I'm pretty certain you can find wireless headphones in the market that have "standard" analog plugs (like 3.5mm" headphone or RCA plugs). This feels like there's a huge market for callcenters and generally, people that regularly have to make phone calls.

Whether or not these headphones use Bluetooth or something else for wireless communication between headset and plug is a different question.

Generally, what these devices (probably) all do is the following:

Bluetooth specifies how to do the digital link part of a headset connection using its "Headset Profile" HSP. That way, any bluetooth headset will be able to talk to any Bluetooth master (e.g. a smart phone) that speaks the same profile. (And, since that's only a software thing, many devices can).

Now, you can build something like that yourself rather easily! You just need a PC, a laptop, or a single-board computer with a bluetooth adapter. Adapters cost lest than ten bucks. What ever computer you use needs to have an analog line out and an analog line in. If it doesn't, you'd need to spend another hand full of dollars on a USB sound card.

Cable your computer to your rig; how to do that exactly depends on the analog line in and out interface your rig has.

Some rigs (e.g. Yaesu's FTM-100 and FTM-400 VHF/UHF radios) will accept an optional Bluetooth module that will allow you to connect any Bluetooth headset.

In practice I'm not sure I'm happy with how Bluetooth headsets work with ham radios. With HF rigs I tend to prefer to wear a wired headset and use a foot pedal for push-to-talk.

I am not sure if this should be a comment or an answer because I only cover part of the question. First, as others have said, it is possible to use Bluetooth and trivial for listening as there are all sorts of audio adapters that plug into headphones jack and create a Bluetooth signal carrying the audio (just search on Amazon, that is where I bought mine).

I was not interested in voice because I am virtually all CW (aka Morse Code), so the voice mic input part of the problem was not something I was concerned about. So this comment is about BT and CW.

It does not work. Well, it works but the delay that Bluetooth causes creates havoc with sending CW and especially at faster speeds and in particular with fast-break-in operation. I tried for about an hour to train my head to copy while sending and not make mistakes. I had to slow down to about 5 wpm on a straight key before I could do this and that was with slow-break-in only. At 20 wpm and greater, no way could I send. I hear the dit for a letter for the first time by the time I finish the letter such as I, S, or H.

Although I never tried BT with voice but if you do try with voice, make sure you are not listening to yourself by any monitor feedback system. That will probably even mess you up with voice -- like an echo chamber.

There is an active discussion about CW copy and Bluetooth headsets right now on the Elecraft forum. The big issue of course is the delay caused by the BT latency. But, there may be improvements. I quote the following from a post on Elecraft forum:

OK, I did some digging and found marketing info from Avantree. When they say “no” latency, they mean “some” - on the order of 40 msec when used with a transmitter that supports low-latency aptx codec mode. This sounds reminiscent of a Monty Python sketch.

40 msec is about one dit at 30 wpm, which would probably throw me off. I’ve tried to listen to my own sending via various SDRs, and it’s agonizing.

I never did make actual measurements with my setup but I would guess it was probably at least one full dit and a half delay at 10 wpm. Close to 2 dits at 20 wpm.

Not the answer you're looking for? Browse other questions tagged transceiver equipment-design or ask your own question.

8
RF Transceiver for walkie talkie use
3
Kenwood TM-241A direct discriminator out
3
Looking for a UHF / VHF transceiver for PC.`
1
What issues can I expect when using Bluetooth for packet radio?
9
Why don't monolithic HF transceiver ICs exist?
1
Can the transmit and receive functions of a boat anchor transceiver share the tank circuit?
3
SSB Transceiver Architecture - USB with Crystal Filter