This tower is located on the campus of my wife's employer. She's asked around but no one seems to know the purpose of it. Does anyone have any idea what this may be used for?

This tower is located on a corporate campus in Naperville, IL, USA. The entire complex is fenced and secure. 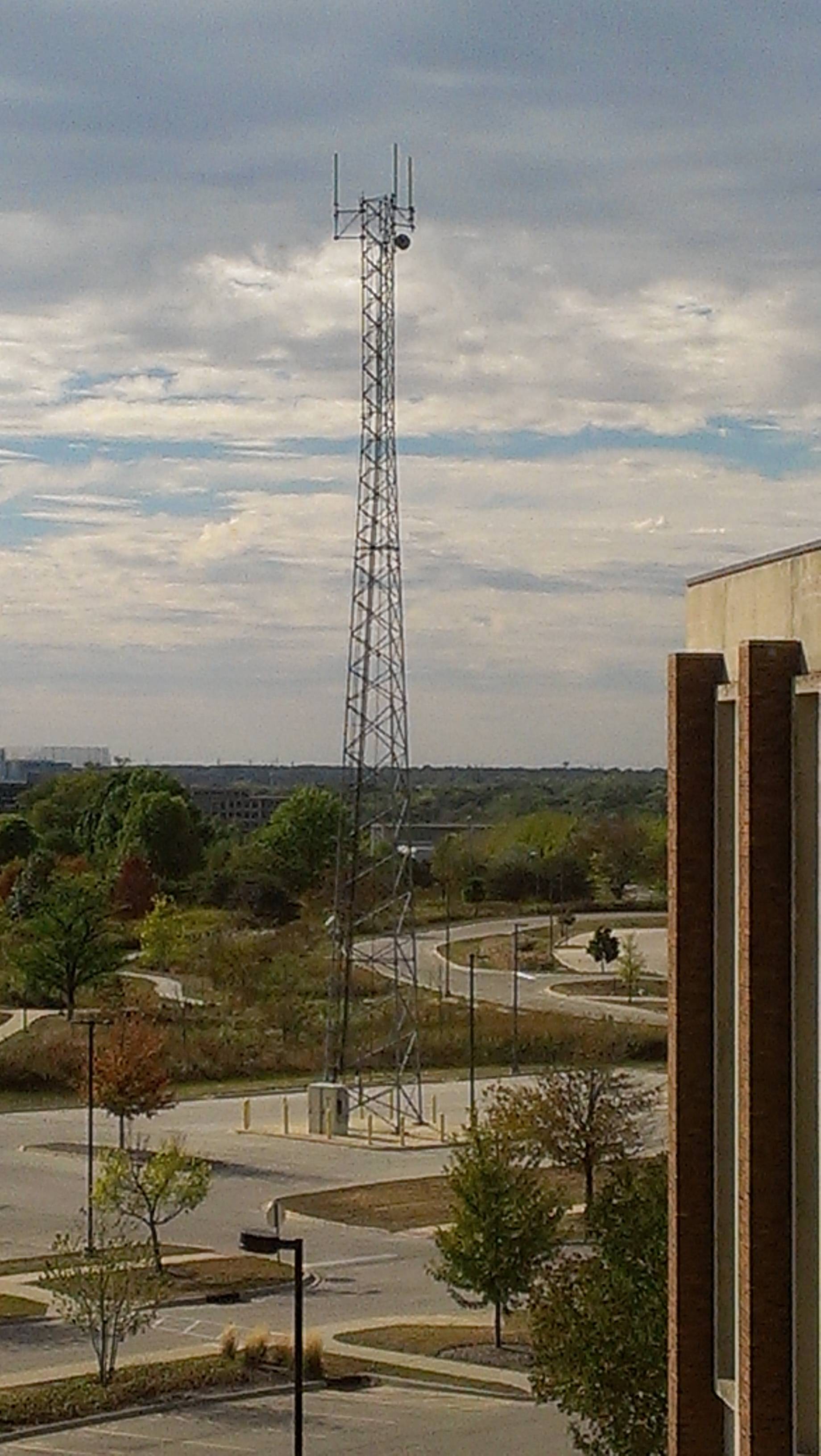 Edited to add additional information: All the cell towers we have around here look similar to these, with these types of antenna arrays. There are no others that just have 3 verticals, so I hesitate to accept "cell tower" as the correct answer. 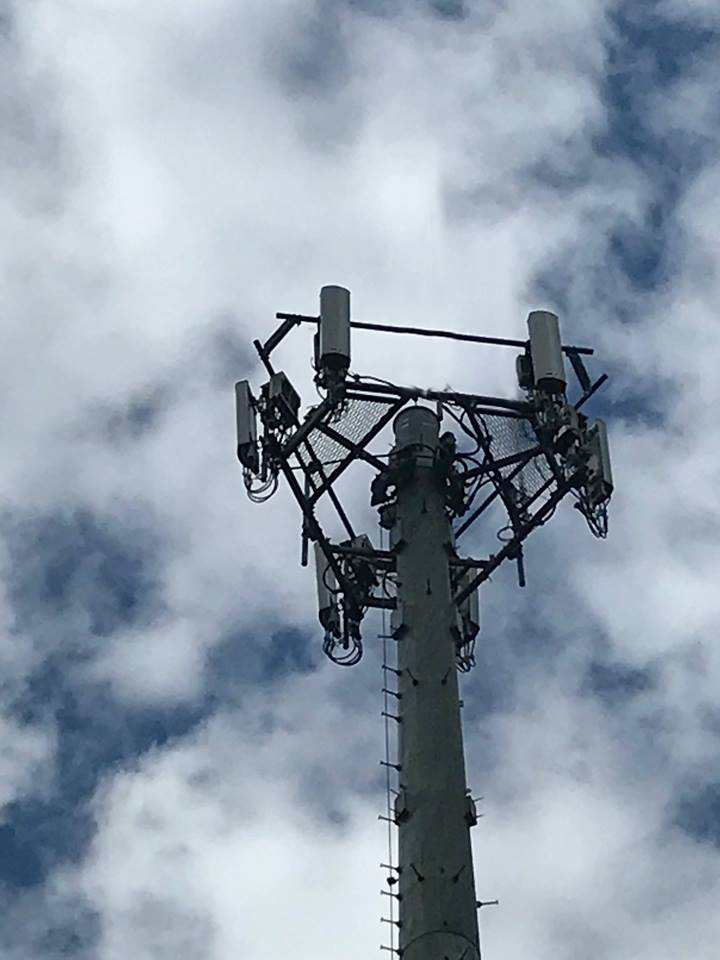 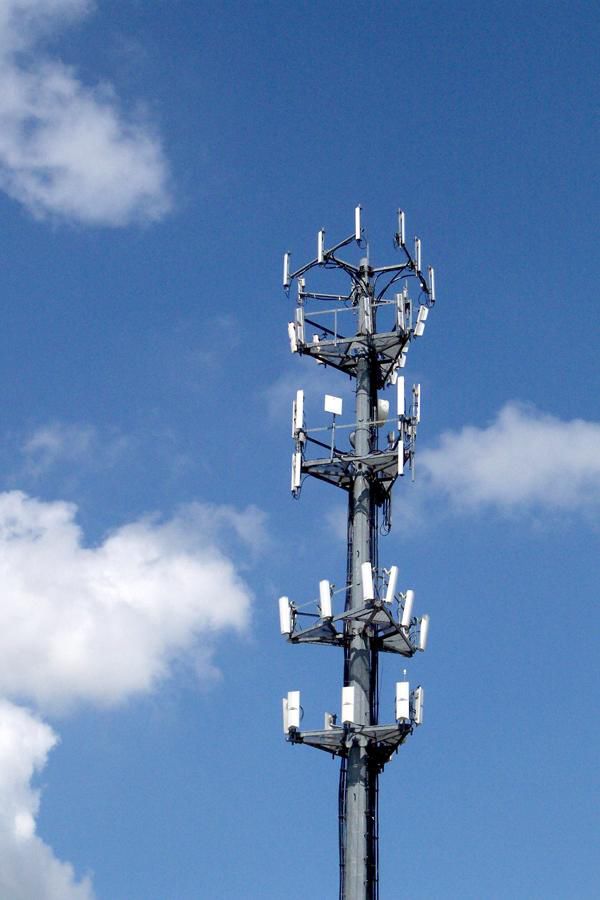 That's a typical cell phone tower. The 3 antennas are phased so that they can change direction when receiving.

The picture isn't of sufficient quality to say for sure, we would need a better closeup of the cabinets and antenna elements to say with any kind of confidence. Also without knowing the country and region where it is situated, it would be hard to compare to what existing operators use for what in said region.

Based on the image alone however I would say it is unlikely to be a cell phone tower, especially an LTE one.

The antenna elements appear to be omni-directional pole antenna, both from the shape and the mounting structure, which are practically never used in modern cell-phone installations.

If the antenna were in fact very slim sectorized antenna, that would indicate a high frequency (1.8Ghz+) system. Given the height of the tower (>=25 metres), a mast head amplifier (MHAs) or remote radio head (RRHs) would normally be used for high frequency cell sites as you would lose a third to a half of the signal in the cabling. Again this could be due to distance the photo was taken at, but there are no visible MHAs or RRUs in the image.

The microwave dish does however suggest a multi-site or cellular system.

Regardless, a close-up picture of the cabinets at the bottom would tell us a lot more.

It's kind of hard to make out on the picture, but it looks like there's something dish-y on the right: So that's very likely a microwave point-to-point link. That might be used as some cellular network's backhaul, for some intra-company communication, video stream, basically anything that has reasonably high rate.

I favor the cellular backhaul theory, since a) that is very common, and b) the box at the bottom of the tower looks reasonably much like a enodeB box I know from LTE installations. Con is the lack of good fence.

The three poles are probably multi-antenna elements that actually do the up- and downlink between user equipment and base station.

The three antennas at the top are definitely a phased array.

Likely this is a cell tower, but I've seen airport radar towers that are similar as well.

Not the answer you're looking for? Browse other questions tagged antenna tower or ask your own question.

9
Marine VHF whip antennae - what are they?
2
What to use to build a tower here in the Philippines?
3
What are these large antenna structures (used for)?
4
What are these antennas used for?
2
Buying used tower
1
Use for Verizon 4G tower antenna
2
Constructing a ground level antenna array to monitor radio frequencies using SDR
6
Antenna options
1
What do radials really do for a vertical antenna?