What do I need to plug a regular set of headphones to an Icom ID-51 PLUS2? 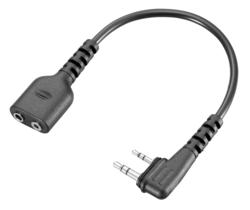 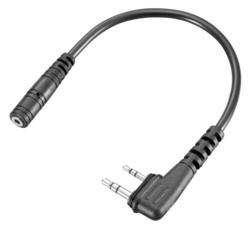 allow me to connect a regular set of headphones?

The manual for this radio is particularly unhelpful on this point.

For most radios with this style jack, one hole is for the microphone and the other is for the speaker. The speaker jack could be either stereo or mono, but adapters you listed both use three ring plugs, so it isn't mono. If it is stereo, you could plug in a regular headphones directly to the speaker jack without an adapter. The other possibility is that it uses a stereo jack but one channel is speaker and the other is a control channel, but more typically the control channel is in the microphone jack.

Also, there is a note in the manual that you should only plug things into this jack when the radio is off. This is probably because you will briefly short out the jack as you put the plug in. This could damage the radio if it is on, and could cause popping noises in the headset/speaker.

I am not sure, but have these suggestions to offer.

Bear in mind the the task is different if you only intend to listen versus have the microphone component of a computer or phone headset work with the radio. (To me, a "regular set of headphones" is listen only, but many headphones these days have built-in microphones for use with mobile phones.)

The OPC-244 adapter posted at the top of your post converts the narrowly-spaced terminals to a more normal spacing, compatible with the typical speaker-mics and headsets for Kenwood et al. If you're familiar with this configuration, you might have some knowledge about what your options are. As far as I know, the pinout is the same as the radio provides, but with different physical spacing.

Not the answer you're looking for? Browse other questions tagged icom icom-id-51-plus2 or ask your own question.

1
Remote control for Icom IC-7100
4
What is the difference between Yaesu noise blanker (analog IF) and Icom noise blanker (perhaps digital)
3
Does the ICOM ID-51A's repeater search work with non-D-STAR repeaters?
1
Purpose of “Low 1” and “Low 2” on Icom F50?
1
GNU Radio BPSK reception from ICOM SSB audio
1
Any ideas why my phone is not connecting to my Icom ID-51E PLUS2?
0
Temporary Skip frequency on an Icom ID-51 PLUS2
1
Recording from ICOM R8500 to pc
3
What kind of power plug does the ICOM IC-7300 need?