What is the process of sending an NTS message in to a disaster area?

I have a friend of mine that is from Puerto Rico, and hasn't heard from her family in some time.

I am aware of the NTS, and have considered sending a message into the area to see if any word of her family could be determined.

I'm not sure what the protocol is, in a time that might be very difficult and high priority communication is required. Is there anything I should know about making an attempt to send a NTS message to check on the welfare of her family?

As a member of the ARRL field organization, I just received this advisory based on the fact that the ARRL volunteers in PR will only be handling outbound traffic:

...members of the public should access the American Red Cross Safe and Well System online at https://safeandwell.communityos.org/cms/index.php. Status information from friends and relatives in Puerto Rico will be entered into the system as it arrives from amateurs stationed there.

In quick summary form: to originate a radiogram, you'll need to:

Most NTS nets are interested in picking up traffic. However, not all traffic gets delivered. In particular, the end result of an NTS message is usually a ham making a phone call or sending an email to the recipient. In an area where communications infrastructure is down, that can be a challenge. In those cases it is a lot easier for someone to send an NTS message out of a disaster area ("I'm OK") rather than for a ham on the ground (who may be busy with other communications) to get in contact with a stranger inside the disaster area.

Here is a relevant article:

Trying to contact family in Puerto Rico? Here’s who to call (Miami Herald)

As food and water have become more scarce, panicked family and friends in the mainland U.S. and beyond are being advised by the territory’s Federal Affairs Administration to do the following:

▪ Check the map below. Puerto Rico is divided into 12 zones. Each zone is comprised of various municipalities. Phone numbers are listed for all municipalities and for each region. These phone numbers will connect you with the nearest Puerto Rico State Agency for Emergency and Disaster Management office.

They can give you a better idea of what the conditions are like in specific areas. 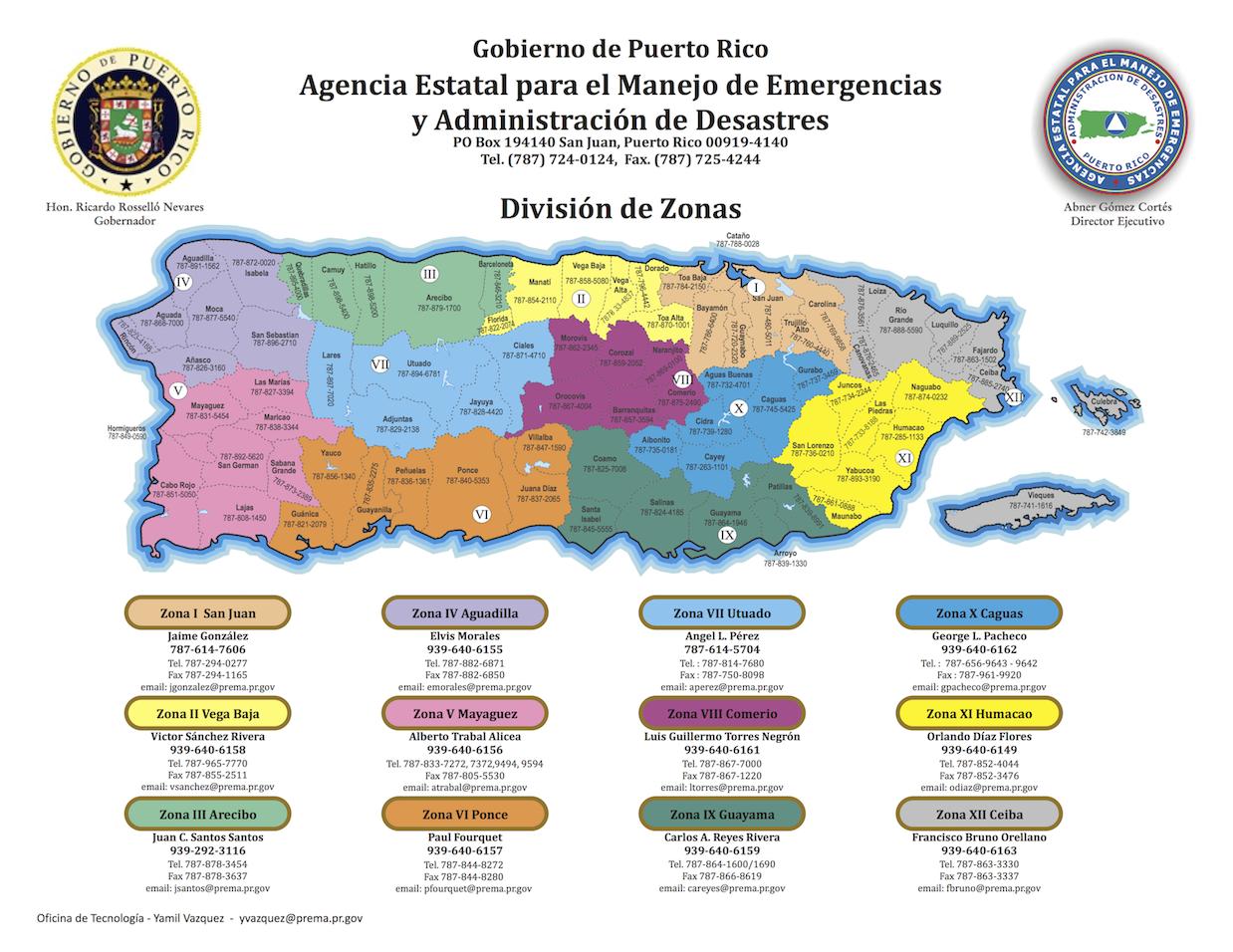 It’s likely that you won’t reach someone immediately, so be patient, officials warn.

If you don’t know what municipality or zone your loved one is in, you have a few options:

Volunteers and staff are taking names and numbers and developing databases to check the welfare of people who remain unreachable or missing as the island begins to recover.

Officials say that agency is prioritizing emergency situations, like people who are in [dire] need of medical attention. Staffers will reach out to first responders on the ground and dispatch help. In the last 48 hours, the office has received more than 10,000 calls.

Because of high volume, leaders are asking that you only send one email — no follow-ups — unless the status of your loved one has changed.

Include your contact information and as many details about your family member or friend as possible.

▪ The American Red Cross is also helping via an online database, where people can mark themselves safe.

To begin a search, contact your local Red Cross chapter. You can also call our free national helpline at 844-782-9441 or use the International Reconnecting Families Inquiry Form.

▪ Radio station WKAQ, which lost it’s roof during the storm, continues to broadcast news and can be listened to online.

Really, it is much more likely that the survivors will reach out to loved ones as they are able.

Here you can see one way they are communicating back to the rest of the world: 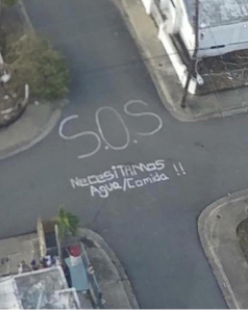 Hurricane Maria victims in Puerto Rico struggle to connect with their families on U.S. mainland 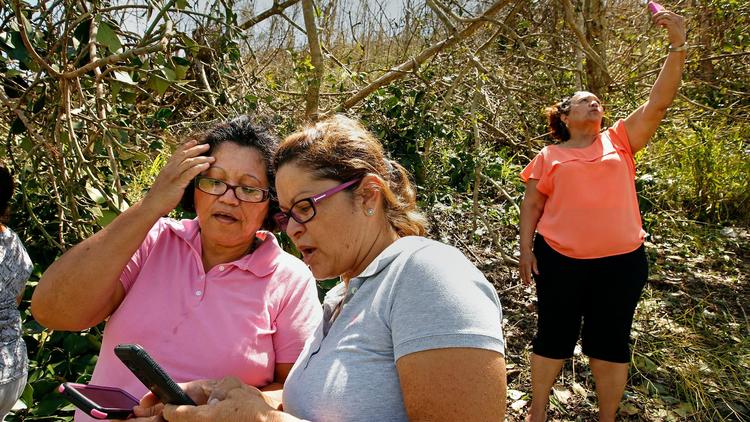 The American Red Cross just put out a request for hams for Puerto Rico.

The American Red Cross (ARC) has asked the ARRL for assistance with relief efforts in Puerto Rico. ARC needs up to 50 radio amateurs who can help record, enter, and submit disaster-survivor information into the ARC Safe and Well system. In the nearly 75-year relationship between ARRL and ARC, this is the first time such a request for assistance on this scale has been made. ARRL now is looking for radio amateurs who can step up and volunteer to help our friends in Puerto Rico.

The article continues on with the requirements for this service. It is all hands on deck there.

The storm knocked out 1,360 out of 1,600 cellphone towers on the island. Many communities have been isolated from the outside world for days, relying only on radios for news. National Guard members told the Daily Beast they were struggling to communicate on the ground, making their ability to respond to the disaster exceptionally hard. “There’s no communication, that’s the problem,” said Capt. Jeff Rutkowski. 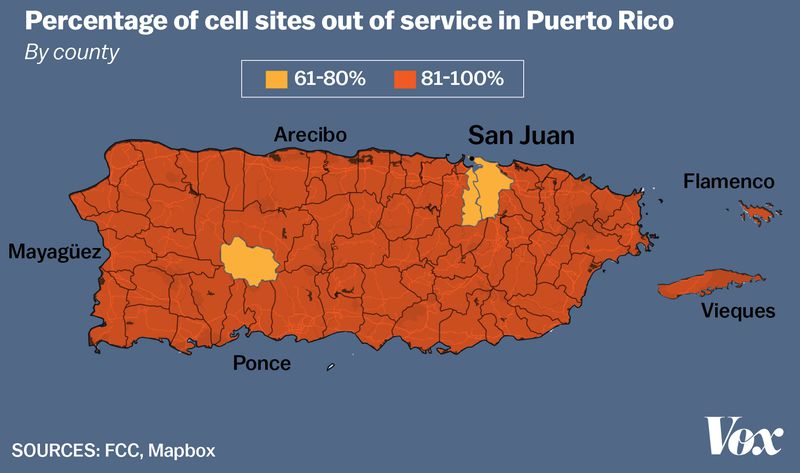 (SAN JUAN, Puerto Rico) — Margarita Aponte and her relatives cleared the road in front of her house with two oxen Sunday, then drove an hour from her devastated hometown in central Puerto Rico to the old telegraph building in the capital of San Juan.

There, thousands of Puerto Ricans gathered for a chance at a resource nearly as precious as power and water in the wake of Hurricane Maria — communication. "It's ringing, it's ringing, it's ringing!" Aponte, a janitor, screamed as her phone connected to free Wi-Fi and her Facetime call went through to the mainland.

Her eyes filled with tears as she talked with nephews, uncles, brothers and sisters in Florida and Massachusetts for the first time since Maria destroyed nearly every cellphone and fiber optic connection on this U.S. territory of 3.4 million people.

The low murmur at one of two free Wi-Fi hotspots is occasionally interrupted by the cheering of someone getting through the largely jammed network. Most spend hours frowning at their phones, unable to connect.

"There's no communication. We're in God's hands," Yesenia Gomez, a kitchen worker, said as she left a message for her mother in the neighboring Dominican Republic.

Dozens of other Puerto Ricans opted to pull over to the side of the road along various highways where cellphone signals were strongest.

Carlos Ocasio, a maintenance worker, picked his way through tree branches and broken glass bottles as he found a spot with a good signal. Soon, he was able to reach his brother in New Jersey.

"My throat got a little choked up and I couldn't talk for a minute," he said. "They're calling me from everywhere, asking when I'm going to arrive." Others in Puerto Rico and abroad called a local radio station to provide names, numbers, exact addresses and pictures of their loved ones in hopes of reconnecting.

But for hundreds of thousands of Puerto Ricans living on the U.S. mainland, there has been only silence from the island.

Shirley Rodriguez, a resident of New York's Brooklyn borough, said she has more than 30 relatives in Puerto Rico but she is especially concerned about her 66-year-old mother, Mildred Rodriguez, who has diabetes and pulmonary hypertension and lives in Hormigueros on the island's west coast.

Rodriguez last spoke to her family before the storm and her relatives were planning on being together for it. Since then, calls to their cellphones have gone to voicemail.

"I'm absolutely numb at this point. It's a rollercoaster of emotion," she said. "Not knowing is extremely agonizing."

Her mother-in-law is in the San Juan area and somehow managed to connect with someone who works for the mayor of Hormigueros, who was able to tell Rodriguez that the area where her parents live escaped flooding. But she still doesn't know what the actual conditions are like.

Some in Puerto Rico expressed anger over what they said was a lack of communication from cellphone providers about which towers were working so they could drive in that direction.

"They're not giving us any information," said Ricardo Castellanos, a business consultant. "We're in a state of emergency."

Not the answer you're looking for? Browse other questions tagged procedure emergency nts or ask your own question.

5
What organizations in the USA can I join to participate in emergency preparedness?
4
What would letter T mean in this radio beacon message?
21
If I hear a distress call, what is the correct procedure for helping the person?
10
What is the process of making a voice contact?
8
What does sending SK after calling CQ mean?
10
How do I find out what bands are open?
7
How would you get an "I'm alive" message to family in another state using amateur radio?
3
How do you indicate how to contact you for an HXE message?
16
If I receive an SOS signal, what is the proper response?