I stayed at a resort in the U.S. recently that is located in an unpopulated area with virtually no radio reception. To fill the gap, the resort has its own FM station that can be heard only within the resort (about a minute after you drive off the resort, it fades away completely). When you tune to the station, all you hear is one pop song after another, with fade/overlap between the songs. There is no station identification, commercials, or any other content.

The only resort employee I could find that knew any details about it said that he was the one who selects the playlist, using a desktop computer application but he didn't know anything about the radio transmission technology.

Does anyone have any information about this type of station? How does the transmitter connect to the software? What kind of equipment (antenna, etc) would it use? What is the software he's using? Where does it fit legally (FCC, etc)? How the heck are they able to keep the coverage area so tightly defined?

I believe you have encountered a Part 15 radio station.

United States Code of Federal Regulations, Title 47, Part 15 (47 CFR 15) covers such things as garage door openers and the like. As such, and due to the fact that they are unlicensed by definition, there is no station-identification requirement. Note that this section covers both intentional and unintentional radiators.

According to the FCC, in OET Bulletin 63: (October 1993), page 15, operation on the FM broadcast band is limited to an effective radiated output of

This was originally intended to provide roughly a 200-foot transmission range. And you can have as many transmitter as needed to cover a larger area.

A typical Part 15 FM radio transmitter is the Ramsey FM100B. 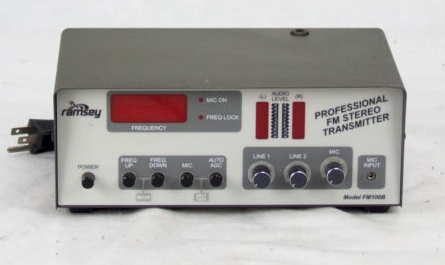 Note that there is no limit to the number of transmitters that can be operated, so it is possible to cover an entire city block or more if you have enough transmitters.

For longer distances, Part 15 AM is often a better choice because of the availability of radios like the Chezradio Procaster, which is FCC type-certified when operated with the integrated antenna. 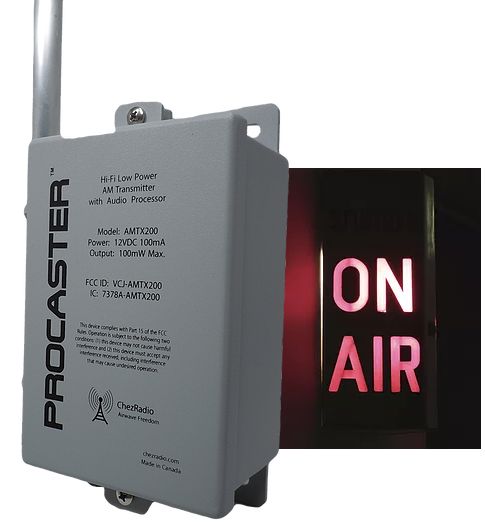 Part 15 AM is limited to 100mW power output and a 10-foot antenna-to-ground length.

This opens many possibilities especially in terms of range. For instance, a Procaster on a rooftop with a 20-wire radial system (a counterpoise, or artificial ground) can often reach more than a half mile in radius.

Software: For low-budget radio stations, one of the best automation systems available for free is ZaraStudio. 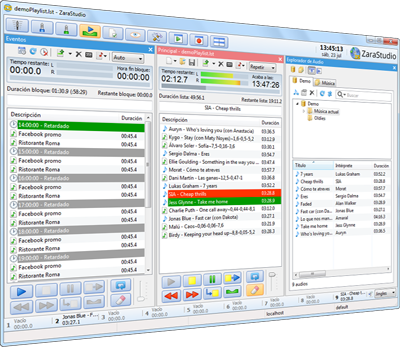 The particular FM transmitter shown above has 2 RCA input jacks for each Line, and a 1/8" (3.5mm) jack for Mic Input. In other words, it has an internal mixer.

The only cable required to connect to a Line input from a PC is a generic one like this:

As with all things FCC, the cardinal rule is that the station operator bears full responsibility to avoid interfering with any other licensed service.

There is an active Part 15 community presence on the WWW. There are many types of antennas in use, including carrier-current where powerlines are the primary radiators.

If you are interested in setting something up yourself it is worth the time to search around and learn from the experience of others.

Of interest here: in the areas under the jurisdiction of the U.S. FCC, legal unlicensed operation in the FM broadcast band is limited to systems producing a maximum field intensity of 250 µV/m at a distance 3 meters in every direction from the transmit antenna. The applicable Rule is found in 47 CFR §15.239.

However most of the "Part 15 FM" transmitters commercially available are rated for output powers of 10 milliwatts or more.

It is up to the transmit equipment user to comply with the law, but probably few users of Part 15 FM systems know what that requires, or how to achieve it.

The FCC is active in finding and citing unlicensed operators who do not comply with §15.239.

Licensing does NOT only apply to commercial use. Generally, any copyrighted material that is intended for the general public needs to be licensed (i.e., played in bars, restaurants, even Part 15 stations). However, BMI is currently the only licensing agency that requires a license for Part 15 broadcasters. Both SESAC and ASCAP have stated in writing that they do not require licensing.

Note that radio broadcasters only have to worry about the copyright of the song (composer, lyricist, etc.). Performances, at least right now, do not require licensing for over-the-air broadcasting. That is something that the music industry is fighting to change.

If you are streaming over the Internet, however, you require a license from Sound Exchange (which covers the song and the performance).

Not the answer you're looking for? Browse other questions tagged united-states legal fm software station-identification or ask your own question.

7
Is there a standard data format for station/channel/band information?
3
Legitimacy and Practice of Frequency Hopping in Ham Radio in United States
3
How can I use all bands when I'm a guest on an Extra's station?
10
Aside from repeaters, what station types allow automated transmissions?
10
Do I need to actually lock up my station?
8
Using ham radio bands for telemetry
5
How strictly is “the end of each communication” defined for the purpose of station identification?
7
Is there a practical way for hams to participate in cellular-related technology advances?
2
Amateur Radio for Science Fair
1
How does one identify the transmitting station at the end of an FPV video transmission?