Is ladder line necessary when using a non-resonant dipole through a tuner?

I've heard if I have a dipole of some arbitrary length, or a random wire, the SWR can be very bad. An antenna tuner can present a decent match to the transmitter, but the SWR on the feedline will be very high, and thus ladder line is required.

Is ladder line really required, as opposed to coax? What are the essential properties of a feedline in this application?

This can indeed be a fine setup. With a suitably low-loss feedline, and a good tuner, just about anything can be made to function as an effective antenna.

There are two factors that determine the losses in this situation:

When the SWR is greater than 1:1, some fraction of the power is reflected from the antenna, back towards the transmitter. The antenna tuner then re-reflects this reflected power back at the antenna.

Eventually, all the energy is either radiated by the antenna, absorbed by the feedline, or absorbed by the tuner. Since each parcel of energy is making multiple "bounces" between the tuner and the antenna, it's subject to the feedline loss multiple times. Obviously, lower feedline loss means less loss. A lower SWR means fewer bounces back and forth, so again less loss. See What is the actual loss in a feed line with high SWR?

Ladder-line does not intrinsically have lower loss than coax. For example, this 300 ohm ladder line sold by DX Engineering has a loss of 0.668 dB per 100 feet at 30 MHz. Compare to Times Microwave LMR-400 at 0.7 dB for the same. There's better coax, and there's better ladder-line, but generally the performance of a transmission line is a function of the dielectric and conductor resistance (mostly the latter at HF), not whether it's coax or ladder-line. 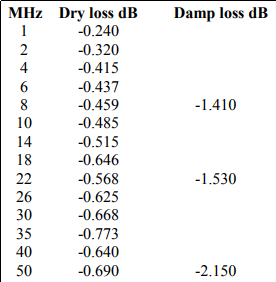 Note the significantly higher loss when the ladder-line is damp. Coax maintains its performance when wet, covered in snow, ice, or dirt, when buried, run through conduit, attached directly to a tower, etc. This is why commercial installations overwhelmingly prefer coax.

Ladder-line does tend to have a higher characteristic impedance, somewhere between 300 and 600 ohms for common designs. This is important.

A resonant dipole is at an impedance minimum, around 72 ohms. So when the dipole isn't resonant, the impedance will be higher, with a typical maximum around 5000 ohms.

Modelling software and antenna analyzers will give an SWR, but this is not the SWR on the feedline unless the feedline has a characteristic impedance of 50 ohms. Given our dipole which may be between 72 and 5000 ohms, this gives a possible SWR from 1.44:1 to 100:1.

With 300 ohm ladder-line, the antenna analyzer will still say the SWR is 100:1 in the worst case. But actually the SWR is only:

This is why ladder-line tends to have a lower loss in this antenna system. Not because it is an inherently lower-loss feedline, but because the SWR is reduced.

However, if you wish to use coax, it's an easy problem to solve. A 4:1 balun on 75 ohm coax divides the load impedance by 4. So again calculating the SWR at the worst case 5000 ohm load:

That's the same SWR as the 300 ohm ladder-line. If the coax and ladder-line have equal matched loss, their total losses will be the same also.

A balun with a higher transformation ratio will reduce the SWR further, and losses with it. If the antenna impedance could be anywhere between 72 and 5000 ohms depending on operating frequency, then the best "compromise" feedline impedance is:

This gives a worst-case SWR at the extremes of high and low antenna impedance of:

Not such a horrible SWR. This could be realized with:

Not the answer you're looking for? Browse other questions tagged wire-antenna antenna-tuner impedance-matching or ask your own question.

9
Why does ladder line generally have a lower loss than coaxial cable?
8
Why must twin-lead conductor spacing be small to avoid radiation?
7
What is the actual loss in a feed line with high SWR?
2
What happens if an HF dipole is made longer?

14
How can I safely transmit without an antenna tuner or SWR meter?
17
What is a “random wire antenna”?
3
Which is better in my situation: Balanced dipole, or as much wire as possible in the air?
3
Balun and tuner configuration for multiband dipole
10
What is an antenna tuner? Why bother with resonant antennas in the first place?
1
Exactly why do some SWR meters give a changing reading depending on the length of coax used to connect to an antenna?
5
Determining Impedance With An Antenna Analyzer
2
Why SWR significantly changes with adding 10-30 meters of coax in presence of RFI choke?
0
Built-in ATU vs Remote?
2
Should I bother with a doublet if I can't go straight to the tuner with open wire?