What happens if an HF dipole is made longer?

An antenna of a different length, relative to the wavelength of the signal, will have a different radiation pattern — it will transmit or receive most effectively in a different direction. 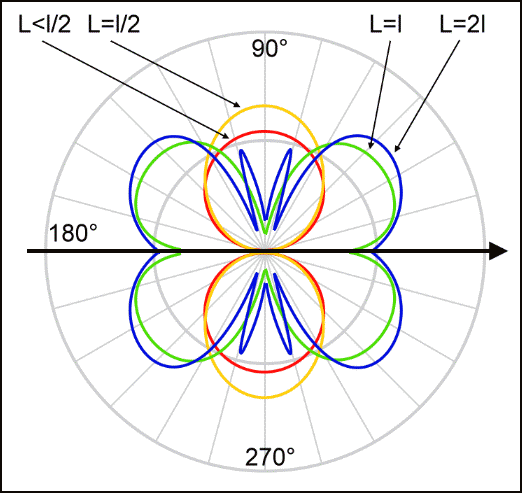 (In the diagram, “L” is the length of the antenna and “l” is the wavelength.)

A regular dipole has a pattern like the yellow line in this diagram — it radiates most strongly perpendicular to the line.

A dipole twice as long (one wavelength) has the pattern shown in green — notice how it splits into two lobes and has a null (approaching zero) at the perpendicular direction.

The problem with such a pattern is that — even though it seems more evenly distributed than the dipole pattern — it is harder to aim in the direction you want, because there are more nulls (four instead of two, in the two-dimensional perspective suitable for a horizontal antenna) and harder to aim away from a noise source because there are more lobes.

As the antenna gets even longer, there are even more lobes and nulls (as you start to see in the four-times-longer blue line).

If you're erecting your antenna in an arbitrary orientation and don't care about the pattern, then you could use a longer antenna, but there's no reason to do so.

I will try to keep this simple. If you have a dipole and its longer than a half wave you can get lobes which can give you a certain advantage and gain in certain directions. This usually only happens when it is lengthened by multiples of a wave length

A 10/8 wave dipole (aka extended double zepp) requires a tuner or matching network when used with coax since it is not even a resonant antenna much less 50 ohms impedance.

In general, as a center fed dipole is lengthened well beyond 1/2 wavelength, the primary lobes point more toward the ends of the antenna instead of perpendicular to the antenna. This change in pattern is often overlooked by hams with multiband dipole installations.

One consequence is the radion pattern changes. Here's an animation from 0.1 wavelengths to five wavelengths for a dipole in free space, running horizontally on the page:

The radiation pattern is given by:

Where $L$ is the length of the dipole in wavelengths.

This should probably be normalized such that the radiation intensity integrated over all angles equals a constant, which would make a fair comparison in directivity among all lengths. I haven't worked out the math to do that yet.

A one wavelength dipole has a very high feedpoint impedance, much higher than 50 Ω. If you decide to feed a one-wavelength center-fed dipole with a tuner with sufficient impedance range, either of these two conditions must be met to avoid severe feedline losses:

Case in point: I have a 75m dipole fed with 60 to 100 feet of RG-6 coax. Although my tuner will perfectly match the shack end of the coax on 40m, my signal is very weak on 40; I have to run 600 watts to make myself heard at all in a group of friends. I finally gave up because only one or two in the group could hear me, and then only barely when the noise on 40m was low. Unless your coax is very short, you'll have similar experiences.

The SWR on 40m at the feedpoint is about 93; the calculated line loss with 100 feet of:

Last I looked, there were a number of online stores selling suitable spacers and the assembled line itself.

Not the answer you're looking for? Browse other questions tagged antenna-theory hf dipole .

4
Is ladder line necessary when using a non-resonant dipole through a tuner?
2
Add capacitor to unload antenna?

18
Why do folded dipoles have greater bandwidth than ordinary resonant dipoles?
5
Dipole versus ungrounded end fed for HF RX
2
Balun and tuner configuration for multiband dipole
1
What is the equation for the arm lengths of a half wavelength dipole antenna?
0
To folded dipole, or not to folded dipole?
4
Actual Impedance of a folded dipole at resonance
0
40 meter band Dipole antenna designed is not receiving any signal at 2 km distance
3
Calculating SWR for a dipole
9
Why are longer antennas not suitable to pick higher frequencies?