I'm confused by the difference between the phase velocity and transmission line propagation velocity.

From https://en.wikipedia.org/wiki/Speed_of_electricity, in a good conductor, phase velocity (speed of an electromagnetic wave) is given by

From this we can calculated that 60Hz wave travels along a wire at about 3.2m/s (and group velocity is about twice this speed). This does not gel with my experience of turning on a light switch!

On the other hand, the Telegraphers equations say that the speed of propagation in a lossless transmission line is

which tends to give velocities up around the speed of light.

There is disconnect here that I can't quite put into words. Best I can do is - what does the phase velocity of 3.2m/sec mean and how does it relate to the result derived from the telegraphers equation (if it relates at all)?

Electromagnetic waves don't propagate well in good conductors. If the conductor is good, that means a small electric field in the conductor can result in a large current. With the large current comes large ohmic losses, and thus the energy is rapidly dissipated.

If the conductor is ideal, with infinite conductivity, an electric field can't exist in it at all.

However, a conductor can exist at a different electric potential than the things around it, provided it's separated some kind of thing that can support an electric field. Like air, PTFE, or indeed most everyday materials that aren't conductors. These things are all dielectrics. An electric field can exist in this dielectric, and it's this field which is responsible for energy transfer in everyday experience.

I think your confusion is really about energy flow. When you flip on the light switch, the light comes on pretty much instantaneously. That's because the wire delivers energy to the light bulb right away. But... the energy does not flow through the conductor! Instead, it flows through the space around the conductor. Mathematically, the energy flow is given by the Poynting vector $S = E \times H$, where $E$ is the time-varying electric field and $H$ is the magnetic field. Here (from Wikipedia) is what happens inside a coaxial cable: 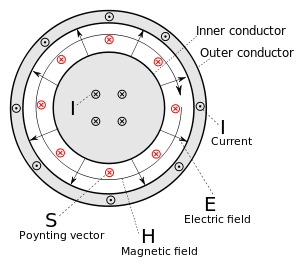 Small circles with an "x" in the middle are vectors pointing into the page, and those with a dot in the middle are vectors pointing out of the page. You can see that the energy flow takes place within the dielectric, not the conductor. As you point out, the speed of an EM wave in a dielectric is close to that in a vacuum, so the energy moves quickly around the wire to the light bulb.

Not the answer you're looking for? Browse other questions tagged propagation transmission-line or ask your own question.