What is the purpose of having multiple bays for a bowtie antenna?

What would be the difference between a two-bay antenna designed like this: 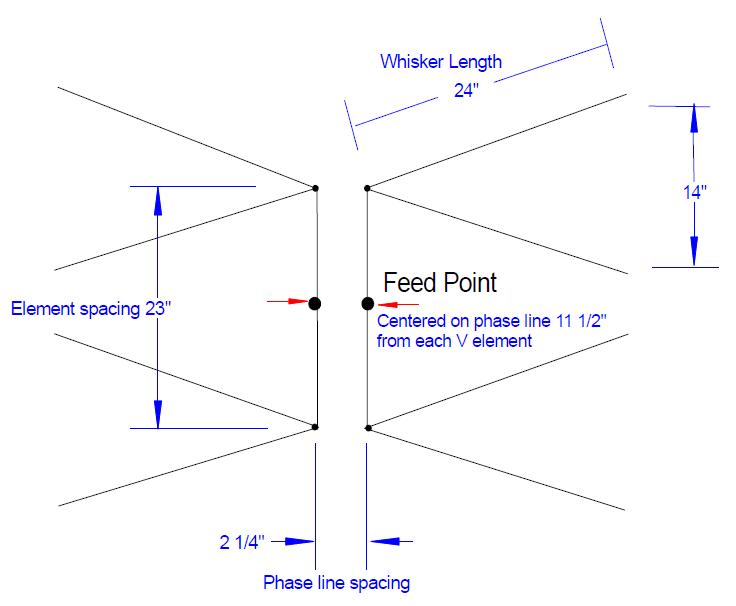 Assuming that everything about these two antennas are identical aside from the number of bays, what exactly does "adding more bays" do for a bowtie antenna?

It increases the directionality and gain of the antenna. This helps it reject noise coming from directions other than towards the transmitter. The higher signal to noise ratio leads to better reception.

For this antenna as drawn, the directions of maximum gain are two: one coming out of the page, and one in the opposite direction. Sometimes these antennas will have a reflector behind them to reduce that to just one direction.

For a wave arriving from the maximum gain direction, the wavefront hits all the bowties at the same time. The individual signals received from each bowtie then add constructively.

The crossover compensates for this delay. The wave is oscillating with some period; if we wait half this period the polarity at that instant will be reversed. The crossover accomplishes the same thing, not by waiting but by crossing the wires. Meanwhile, the extra distance that must be travelled from the farther bowties introduces another half-period of delay. That half-period, plus the additional half-period of the crossover, means that we are effectively delaying the signal by a full period, which is the same as not delaying it at all.

I find I learn a lot by reading catalogs, and this was no exception.

Going from THIS AD FOR BOWTIE ANTENNAS they claim longer range with more bays.

That would make sense because there would be more surface area with which to capture signals.

Obviously, an antenna like your diagram would be bidirectional like any dipole, but the one listed in that ad has a screen reflector on one side to make it unidirectional.

Not the answer you're looking for? Browse other questions tagged antenna antenna-theory bowtie or ask your own question.

8
What sort of radiation efficiency can one expect from a folded dipole?
3
2 antennas and 2 amplifiers connected to same exciter radio
8
What is the impedance of an end-fed half-wave antenna?
2
Bow Tie antennas impedance
2
Weakly directive VHF/UHF antenna
3
How does the thickness of the radiator affect an antenna
2
What sort of antenna would use a bicone or lozenge-like arrangement of vertical wires?
2
High Altitude Balloon Antenna Design
1
Does an antenna work the same for pure sine waves as compared to other waveforms?