"When I was in high school, we had 8 hams at once. (Probably rare) 4 of us built little 10 meter walkie-talkies and had great fun using them on Field Day, hiking or around town. It was especially fun because this was pre-cellphone and ordinary non-ham folks could not buy any kind of walkie-talkie. We were hi-tech and really cool. Now the average kid has unused Radio shack talkies in his dresser and couldn't care less about them."

That is from the author of Crystal Sets to Sideband.

Now I'm in the generation of the "radio shack unused walkie talkies" and I want to build myself a 10 meter walkie talkie. I have fairly descent soldering skills and I have been building electronics for about 5 years (I probably started when I was 10)

How can I build a 10 meter handheld, and what parts do I need. I would like getting transistors, inductors, etc and building the whole thing with discrete components (no IC's)

I am not sure if you are asking about converting a CB walkie-talkie to 10m or building one from scratch so I will address both, not feeling like working at the moment:

What it will take to Convert a CB walkie-talkie is going to depend on how it's contructed, of course. It can be as simple as replacing one or more crystals. A cheap one will have one offset crystal to move the channels up into the CB range. Fancier ones might have several crystals. Basically you want to move it "up" 2MHz to get you into about 29MHz. You'll be stuck with the channel concept on the frequencies of the crystals, of course, but that can be OK.

A newer CB will probably have some sort of DDS which would make it much much harder to convert.

As a note, CB radios are (usually) AM, and while this is fine on 10m, that's something to remember. Newer ones support SSB as well, but might be much more difficult to mod.

If you want to get crazy you can figure out how to supress the carrier and do DSB or supress both the carrier and the lower sideband. Even more adventurous would be to disconnect the AM modulator, add an FM detector chip (I know you want discrete, but this is just blue sky stuff) and modulating the VCO, then you'd be doing FM. Although these days most repeaters have a PL, which makes this mod a lot less useful.

Poking around on the net, there are a bunch of QRP 10m transceivers that could be built into a walkie-talkie form factor. This one looks pretty doable:

The only IC is a small op-amp for the audio out. Looking the schematic over, it's setup for 220V AC power (the author is Australian, but he's probably OK despite that :) ). Since you are going to want to run on battery, you can axe that whole section and wire the DC source right in.

Another option is a 14MHz SSB transceiver. This page details an all discrete component version that will run on battery power. You can either roll with it on 20m or convert it up to 10m.

The only HT kit I've ever seen in my searches was the "TJ2B MK2 5 Band SSB Handheld Transceiver" from Youkits.

However WB8YQJ's eHam review says this: 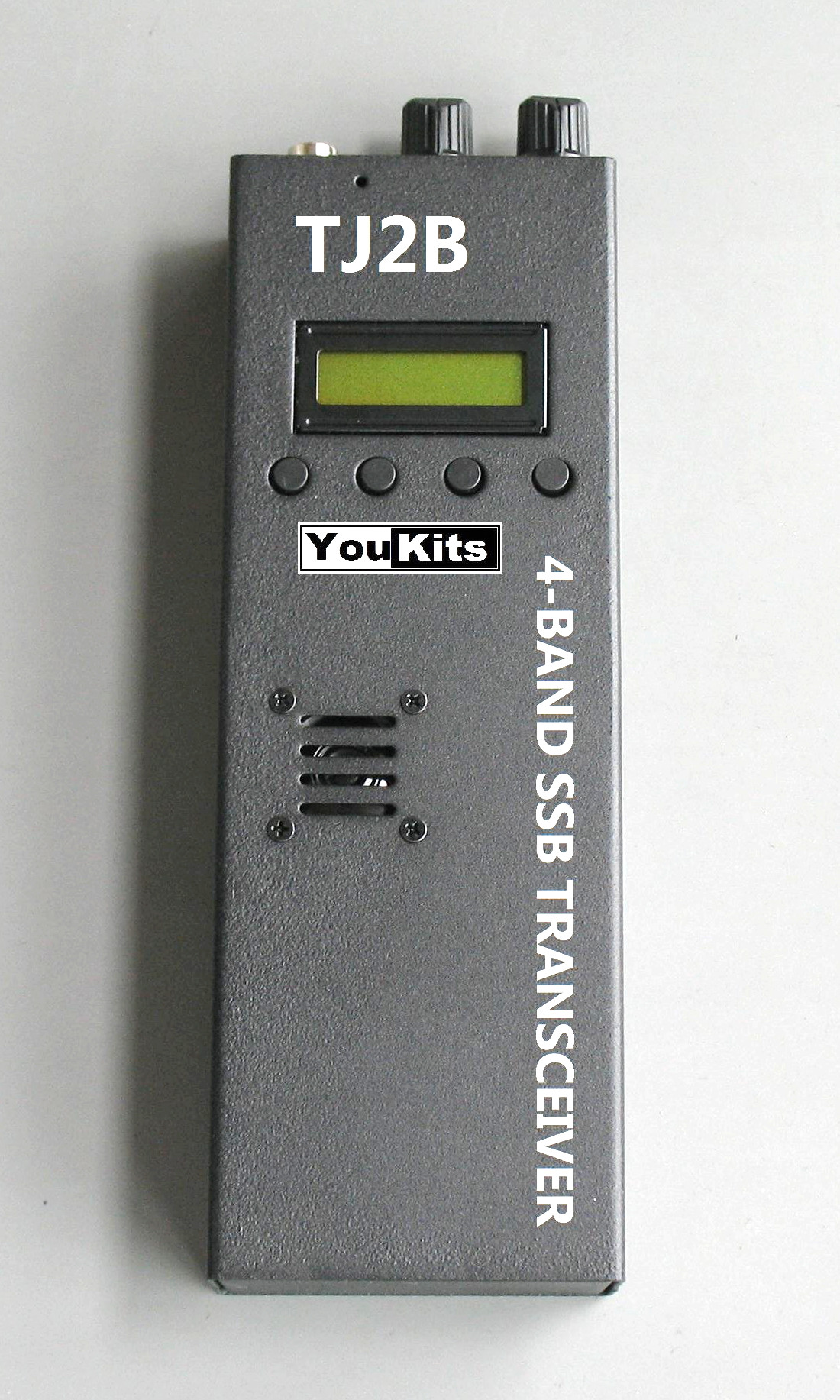 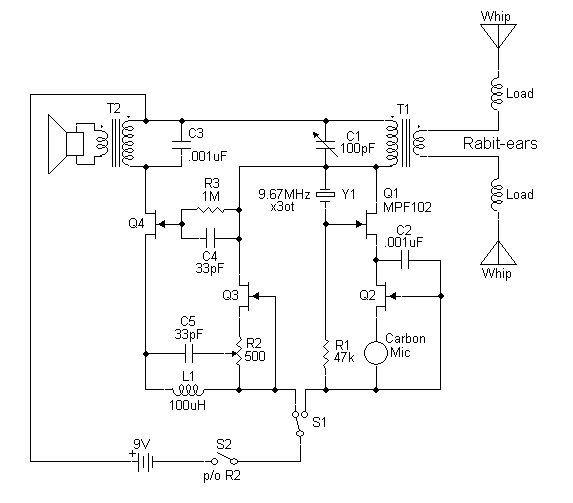 About as simple as a half-watt can get.

Check out the ham swapmeets for a used AEA 10 meter Dx handy, I pickup one at the Williams AZ hamfst for a $100, very well made worked several states including Hawaii, converting a CB walkie talkie would not be that worth while as these radios operate in the Am mode, my honest opinion I would avoid the radios made in China as I feel their quality control is not that good, and if the radio is defective where will you get it fixed ? Ship it back to China ? The Japanese radios are far better made ! Check ot the potable FT-817ND

The best little book you can get yourself is How to Make Walkie-Talkies, a Bernard Babani book by F. G. Rayer. It is simple and you can make everything yourself for 27 MHz and 28 MHz TX and RX, wind your own coils, etc., and using ordinary transistors build a few of the circuits great for experimenting with.

Also for more serious stuff, books are in French but circuits are good: a set of 4 or more books by Pierre Duranton on CB and ham radio, Émetteurs - récepteurs, Walkies - talkies. All make-it-yourself stuff including details of making chokes etc. Best books around. I collected them all over the years and made my first walkie talkies at the age of 11. 50 mW 27 MHz single channel 7 transistor AF115 OC71 types worked OK; short range but they got me into electronics and still going at 58. Enjoy.

16
Can a licensed ham use or modify CB equipment to work the 10 Meter Amateur bands?

7
RF Transceiver for walkie talkie use
9
How can I calibrate a SWR meter?
6
Can I touch the ground of a PWR/SWR meter?
1
Can I build a mini passive repeater to improve my WIFI reception at home?
2
Section 15.23 “Home-built devices” No license required… to build? Just to Transmit. But…?
3
Slot antenna for 2 meter mobile