The display for the Icom F50 has a "LOW" indicator. The Instruction Manual says this is the

"OUTPUT POWER INDICATOR [which] Appears when Low 2 or Low 1 is selected." 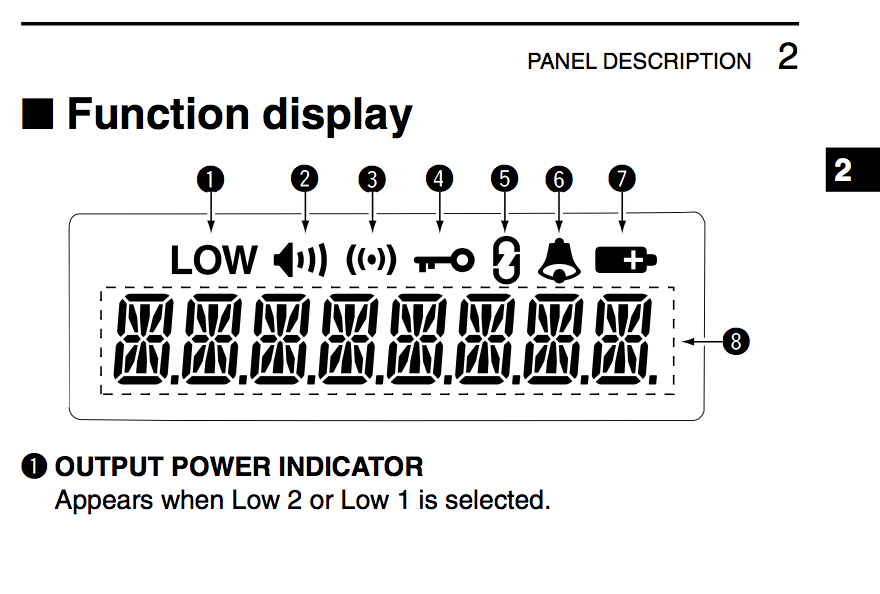 There is no other explanation though on what "Low 2" or "Low 1" is or does.

I don't have one of these radios, but as a matter of interpreting the text of the manual, page 8 says that one of the “programmable function key” functions is:

OUTPUT POWER SELECTION KEY
Select the transmit output power temporarily or permanently, depending on the pre-setting.
• Ask your dealer for the output power level for each selection

From this, I conclude that:

It might be informative to investigate the programming options for the radio — if nothing else to assign OUTPUT POWER SELECTION to one of the function keys and see how it behaves.

Not the answer you're looking for? Browse other questions tagged icom or ask your own question.

1
Remote control for Icom IC-7100
1
AFSK and GMSK in ICOM IC910 H
1
Identify Icom portable radio
5
Receiving commercial / public-safety on a general-coverage HAM transceiver
4
ISS APRS Digipeater with Kam XL and ICOM IC-910H
0
Using the VHF port for 6m on an Icom IC-706mkIIg transceiver
0
Temporary Skip frequency on an Icom ID-51 PLUS2
3
Is it possible to receive weather satellites with a ham radio rig? (Icom 910)
0
Can I splice a random wire antenna?