Are directional couplers ever used in duplex repeater systems?

I understand that most single-band repeaters will use a tuned cavity duplexer to isolate the received signal from the transmitted signal, since the frequencies are very close and extremely sharp filtering is needed to separate them.

But while the frequencies are close, another difference between the incoming and outgoing signals is just that: they are traveling in opposite directions! Could a repeater use a directional coupler to separate the two signals? 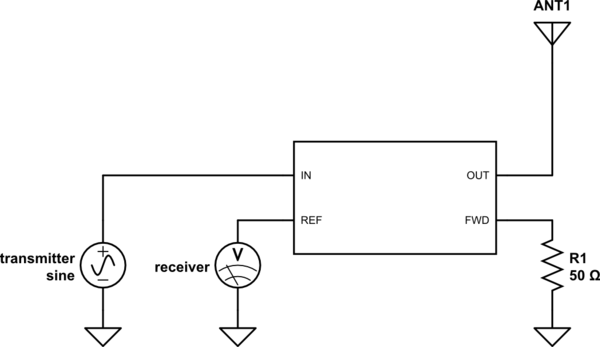 Let's say you have a really good directional coupler with a directivity of 55dB. And the antenna is a good match with a VSWR of 1.1, or equivalently a return loss of 26 dB. And the transmitter power is 10 W, or 30 dBm. And we'll say we select a directional coupler with a coupling factor of 10 dB (though as you'll see, the coupling factor doesn't really matter).

That -56 dBm is then subject to the 10 dB coupling factor, so at the receiver it becomes -66 dBm.

In addition to what Kevin said, if you can, you'd usually use frequency duplex.

That has technological reasons:

Among the problems is that a directional coupler only discriminates based on direction, and in a real system there will be reflections from many elements of the system beyond the coupler:

Any such reflection would end up in the receiver. A duplexer will instead discriminate based on frequency, so the reflection is re-reflected back out the antenna (very similarly to the function of an antenna tuner).

Directional couplers can be used when the reflections from any of these sources are actually what is of interest, usually in RF test equipment or some types of radar.

One small possible quibble to W8II's answer; both transmit and receive should be affected by feedline losses; because returned signal has to go both ways down the feedline whereas the received signal only has to go one way, I think you'd need to subtract "x" from both sides as well as an extra x from the returned transmit power.

His basic point still stands -- you can't do duplex because the local signal will overwhelm the remote signal at the receive, even under near-perfect SWR conditions.

However I am looking into using a directional coupler with a QRPp SDR transceiver which has both TX and RX ports, so that it can use a single antenna in simplex mode (the alternative would be a coax switch or relay). Because the power is pretty low to begin with and I am not planning on using a big amplifier (will probably not amplify more than 2 watts), I think/hope that the attenuation from directivity, coupling, and feedline losses ought to be sufficient to keep the receiver from getting fried by the returned power on the transmit signal.

EDIT: I originally said that the amount to subtract is 3db for double-feedline-loss, but after a good night's rest realized how stupid that was. Yes double is 3dB but that is relative to x, not relative to our starting transmit power.

Not the answer you're looking for? Browse other questions tagged repeater filter directional-coupler or ask your own question.

2
What's the difference between a Return Loss Bridge and a Circulator?

1
VOIP link to repeater- simplex or duplex?
3
Using a Duplexer and Diplexer in Series
3
Selecting Directional Coupler for VSWR Measurement
3
Are there any "parrot" repeater software projects out there?
5
What are the regulation requirements for running a repeater?
4
Can one repeater be used to hit another repeater?
1
Why is a separate repeater required for digital modes? Why can't an analog repeater be used for digital modes?
3
Why do repeater duplexers have notch cavities between transmitter and antenna?