How does VHF/UHF propagate beyond the expected (radio) horizon?

I am not asking about the fairly well-known effect of the earth "appearing less curved to radio waves" that are otherwise still essentially line-of-sight, but a deeper arcanum:

In the ARRL Antenna Book, 17th edition (1994) there is a discussion of "Reliable VHF coverage" in starting on page 23-7 in the Radio Wave Propagation chapter. The claim is made,

Because of age-old ideas, misconceptions about the coverage obtainable in our VHF bands persist. This reflects the thoughts that VHF waves travel only in straight lines, […] However, let us survey the picture in the light of modern wave-propagation knowledge and see what the bands above 50 MHz are good fro on a day-to-day basis, ignoring the anomalies [presumably referring to the tropospheric ducting of previous section] that may result in extensions of normal coverage.

UPDATE: thanks to W0BTU Mike, here's the actual charts scanned from an earlier edition:

What "modern wave-propagation knowledge" is this referring to? What mechanism(s) would allow VHF signals to be 99% reliably received 500 miles away, albeit with more than 250 dB of path loss, or 50%-of-the-time reliability with a little less loss? (These path-loss charts do NOT assume any antenna-height gain.)

Turns out that, after turning to discussion of HF propagation for a number of intervening pages, this Antenna Book ends up getting back around to its own answer for this question!

The wave energy of VHF stations is not gone after it reaches the radio horizon, described early in this chapter. It is scattered, but it can be heard to some degree for hundreds of miles. Everything on Earth, and in the regions of space up to at least 100 miles, is a potential scattering agent.

Tropospheric scatter is always with us […] this is what produces that nearly flat portion of the curves given in an earlier section on reliable VHF coverage. … As long ago as the early 1950s, VHF enthusiasts found that VHF contests could be won with high power, big antennas and a good ear for signals deep in the noise. … Ionospheric scatter works much the same as the tropo version, [… and] can fill in the skip zone with marginally readable signals scattered from ionized trails of meteors, small areas of random ionization, cosmic dust, satellites and whatever may come into the antenna patterns at 50 to 150 miles or so above the Earth. […]

It goes on similarly to discuss "backscatter" and "transequatorial scatter" before going on to a different section on "auroral propagation" (which can also affect VHF but is probably not related to the reliable propagation graphs).

So in short, "scatter" (in many forms) is claimed as the mechanism that allows VHF signals to be heard hundreds of miles beyond the primary "radio horizon".

I also believe the ARRL editors consider the experimental discoveries of the various scatter modes to be the "modern wave-propagation knowledge" referred to earlier — in this "Scatter Modes" section there are a couple historical references around the same dates as the QST article, including the "early 1950s" one quoted above as well as Transequitorial scatter as "an amateur 50-MHz discovery in the years 1946–1947".

Terrestrial, point-point propagation paths can exist due to diffraction of the radiated e-m fields over terrain peaks and man-made structures, with each diffraction adding loss at the receive antenna to the normal inverse-distance field loss for an LOS path of that total length.

The graphic below illustrates this for an FM broadcast station, where the line-of-sight path is severely obstructed, but the signal can be received well beyond those obstructions.

The real propagation path would consist of several straight-line segments over terrain peaks, joined together to connect the transmit and receive antennas.

In this example, the additional loss due to diffractions compared to an LOS path of that total length is shown to be 76.59 dB.

The received field will vary over time depending on atmospheric K-factor and other conditions. 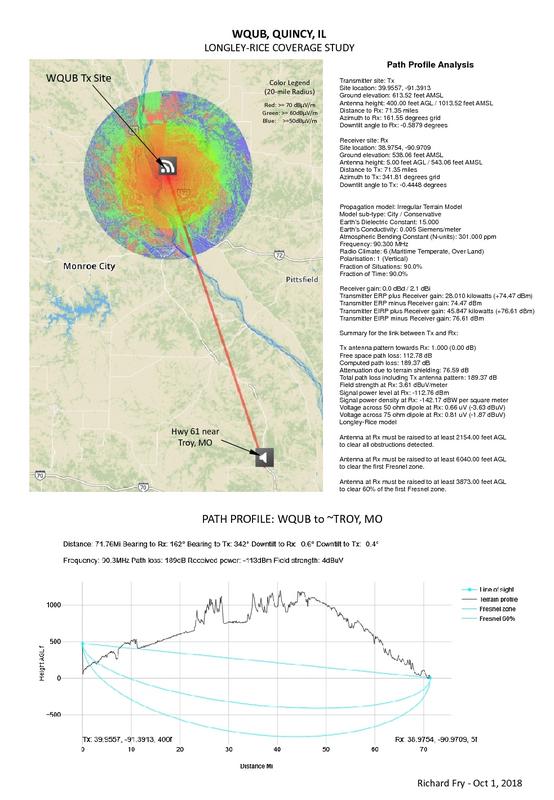 I really don't know – in a review, I'd have marked that sentence as far too vague – what the author means with "modern wave-propagation knowledge". If I need to benchmark that knowledge against a 31 year old Ham article, well… I don't really think it's a great advocate. "Modern knowledge", to me, is probably something that is what research on an academic level has yielded and is now dissipating into technological areas such as amateur radio, and thus, an article in a ham mag might by definition, not be used as describing the state of the sciences in 1961¹.

So, I dispute your "expected radio horizon"; just because a ham expert in 1961 modeled something is really no great reason to expect the same to be accurate in 1994.

Anyway, having minimal knowledge of earth observation and radio propagation modelling, I'd go for:

¹I know that article is cited in many ham places. I've never read it.
However, it seems to me that modeling VHF transmission's reach in 1961 should basically be equivalent to asking a couple of WWII and cold war radio engineers; it's really not like radio reach is not a very important strategic factor, and I'm very certain that all involved parties had very accurate recordings of how far they could reach, and will have worked to improve their models to match that, long before 1961.

These models might not have been public back in the day, but really, they also shouldn't be that much of rocket science to recreate. In 1994, there should be no "surprise" in how VHF propagates terrestrially – I really think it's very worth writing articles that bring research-level theory, models and experimentation to the amateur masses (which, by the beard of Hertz, are pretty good at such things), but you must then compare these to state-of-back then in academics, not in ham mags. That's just unfair – many countries simply had restrictions on radio usage during WWII, so the amateur radio community just needed a decade or two to catch up. That catching-up phase was an especially fruitful one, what with all the semiconductor technology emerging at the same time.

Downside of that being a phase is that if you look online, you still find a lot of people trying to build the 1960's kits nowadays, even trying to get the same diodes and transistors of the day – there's really no good reason you'd want a Germanium noise gen– err transistor amplifier if you can have a silicon one for cheap, if you just don't stick to material from the "golden era of rediscovering possibilities". I attribute that to a lot of Kit manufacturers and mag publishers just copying articles from back then, until the original source and its restrictions got lost. Enough ranting for today.

Historically, this is the best time of year (Late September through early December) in the northern hemisphere to enjoy VHF and UHF propagation enhancements ("band openings") caused by sharp air temperature differences between two (or more) distinct layers of air. These occur far below the ionosphere.

However, band openings can occur in any season. The two types --somewhat related-- are described below.

By far, the most common type. Just two layers in the troposphere are are involved.

Often incorrectly referred to as "ducting", these occur where there is a sudden change in air temperature vs. height, and can even cover an area encompassing many hundreds of square miles. They usually occur along a cold occlusion or occluded front.

While most common in the fall and spring, I know a ham in Ohio who observed a spectacular band opening years ago in January, where the temperature dropped from above freezing to -20° F in a matter of hours. (It would have been even more spectacular had other hams known about it, but there was no Internet or VHF DX clusters in those days.)

A genuine duct consists of three layers of air.

They can be spectacular and extend over a greater distance, but are rare.

A true tropo duct almost never covers an area anywhere near as large as a temperature inversion. By *waveguiding" I assume that Marcus means "tropospheric ducting".

Below is what a duct looks like. More details can be found here.

Features common to both inversions and ducts

Both inversions and ducts usually occur when the air is relatively calm. Once it gets windy, the air masses start to mix and the band opening gradually disappears.

Experienced VHF/UHF enthusiasts understand that whenever a hot day followed by a rapid and large temperature drop in the evening occurs, there might be a good opening. The larger the drop, the better the DX.

You can tell if you have a band opening in your area by transmitting on 146.94 (or another very common FM repeater frequency) followed by receiving countless beeps, heterodynes, and distant repeater IDs when you unkey and listen. During the better band openings, all it takes is an HT to experience that.

Depending on who you ask, that can either be a blessing or a nuisance. ;-) They can and do cause interference to both local and distant repeater groups. Hams operating SSB or CW below ~144.250 or on simplex FM frequencies within that area are treated to a special delight.

7
Can I talk 2 Meter VHF across the United States

8
How to improve VHF/UHF Baofeng UV-82 HT reception in vehicle
9
How does the South Atlantic Anomaly affect propagation in the HF bands?
2
What would be the easiest and most cost effective ground system for a startup UHF/VHF station
16
Where are the baluns for VHF and higher? How can one be made?
1
How to learn about the physics behind propagation?
0
Does the E-field propagate faster that the H-field?
10
Better explanation for beyond-line-of-sight VHF signal reach than "lower curvature to radio waves"
4
Does a UHF/VHF handheld transceiver kit exist?
3
Understanding low MUF in VOACAP
0
How to build the best bang for yhe buck uhf vhf antenna or should i just buy one