Where are the baluns for VHF and higher? How can one be made?

In another question, commenters recommended that I look into adding a 1:1 balun to a dual-band dipole to eliminate the feedline as a radiator. As I understand it, a 1:1 balun also functions as a choke, but is more efficient because... reasons?

When I try to find plans to build a balun, they all seem to specify a frequency range of 1.6-30MHz. Why is that and how can I make a balun that will work on VHF and UHF?

Let's clarify some terminology: a balun is any device used to convert between a balanced system (ladder line, dipoles) and an unbalanced one (coax, vertical monopoles). There are a lot of ways to make a balun, and a common-mode choke is one of them. A choke can also be used in balanced to balanced, or unbalanced to unbalanced connections where suppression of common-mode currents is merited.

The choke approach (or "current balun" as you'll sometimes hear it described) is nice because it's small, easy to fabricate, broadband, and low-loss. "Small" is especially an advantage on HF where other balun designs would be huge.

However, the effective permeability of ferrites drops with increasing frequency, so it becomes difficult to get a sufficiently high choking impedance for the choke to function effectively as a balun. 300Ω isn't great but might be sufficient for some applications. You can always measure and see. 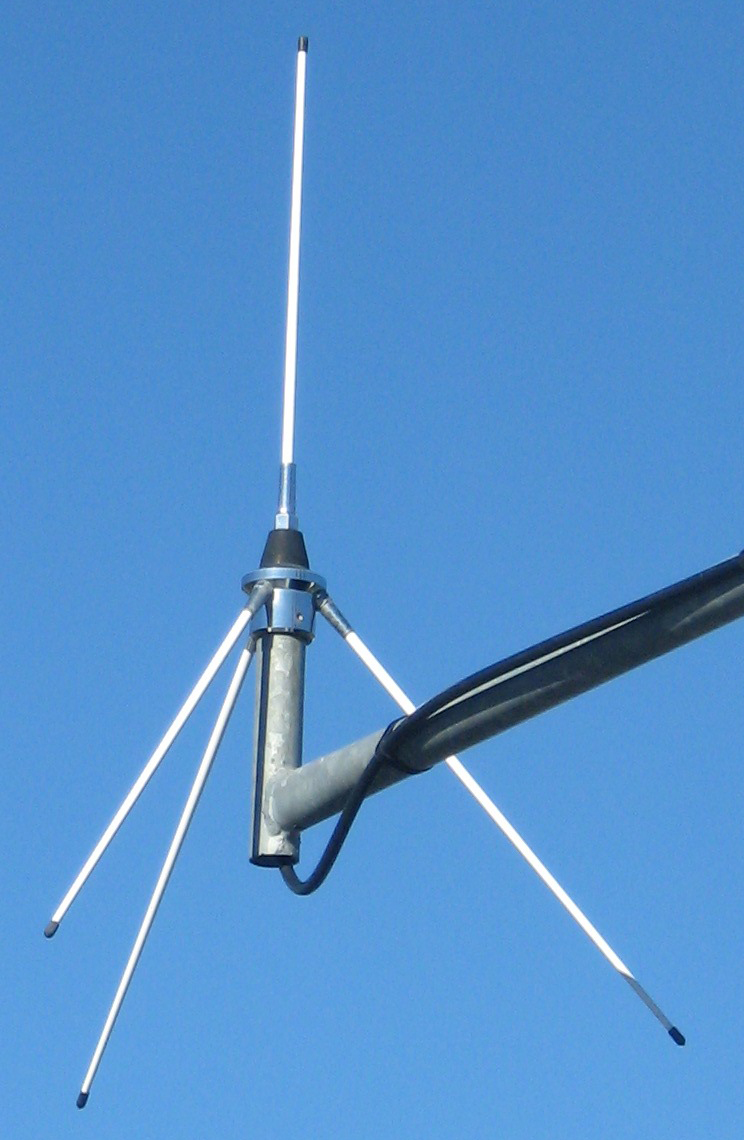 The three drooping wires are the "ground plane". Drooping them increases the feedpoint impedance from the 37Ω of a monopole on a flat ground plane to 50Ω for a better match. Since the ground plane presents a very low impedance to the ground currents, that's where most of the current will flow. The coax common-mode is a relatively high impedance.

Some antenna designs which aren't simple monopoles use a "skirt" which looks like radials on a monopole. As in the monopole, the skirt looks like a low impedance ground plane, and the feedline is "hidden" under it.

Other designs are the folded balun, and the folded dipole. These designs work by getting the coax to attach at a ground potential point, while creating such a point through some clever arrangement.

A sleeve balun is another possibility. It uses a quarter-wave stub to insert a high impedance in the common-mode.

There some antenna designs out there that claim no balun is necessary. Sometimes it's true (the balun is intrinsic in the design) and sometimes it's not. Look for an antenna model that contains a feedline such as W8JI did with the J-pole. Or build the antenna and measure the common-mode current yourself.

What you really want is a choke (often called current balun), as a voltage balun (i.e a transformer) will not isolate the feedline unless the antenna is in book-ideal conditions. The minimum misbalance in the dipole and the isolation is broken.

Don't have experience at those frequencies but I'd try a several series toroids as other have suggested to get a minimum of 2K commonn impedance at the frequencies of interest. If you can make it 5K much better.

If you're looking to minimize common mode current with a choke balun (like that returning from a balanced dipole down an unbalanced coax line), then you could slip a ferrite sleeve around the wire before crimping and heat-shrink it in place. These can be found at Mouser, Digikey, etc. Sleeves are much cheaper than clamp-ons.

Filter by your cable size (sleeve inside diameter), check the spec sheet to make sure it meets your MHz range and impedance requirements, and slip a few of these on your cable before crimping:

There is one easy answer, a balun is a transformer! - a choke is a choke!

Forget you ever heard the term "choke balun".

I'm sure you know balun stands for BALanced to UNbalanced. A 1 : 1 balun can be used to match a coax to an equal value impedance, balanced line.

A simple choke (one to eliminate common mode currents - CMCS) can be made by winding 25 feet of coax around a one gallon ice cream container. They have a slight taper, making it easy to remove the coil after winding and securing with wire ties in 4 places or so. Note the number of turns is not the critical factor here; rather the length of coax used. This should be effective from 1.8MHz and up.

Not the answer you're looking for? Browse other questions tagged vhf uhf balun filter or ask your own question.

19
How to detect common-mode currents or “RF in the shack”?
6
How does the length of a metal sleeve around a (shieled) coax cable affect antenna performance?
8
How is a 1:1 current balun different from a choke?
7
What is the maximum number of turns in a ferrite core used as a common mode choke?
6
How does a folded balun work?
5
How to calculate single-stub match (general case)?
3
Unexpected Resonance - Dual-Band Dipole
3
Are chokes necessary for VHF and higher frequencies?
0
2 meter coax cable balun dimensions for use with a ground plane?

6
Impedance Matching Different Feedlines
2
What would be the easiest and most cost effective ground system for a startup UHF/VHF station
11
How does VHF/UHF propagate beyond the expected (radio) horizon?
3
Are chokes necessary for VHF and higher frequencies?
5
Wide band TX capable band-pass filter for VHF and Airband
2
Optimal length of HT antenna for VHF UHF and diminishing return
2
how does this collinear antenna work?
5
How does this quarter-wave stub balun work?
1
There are good guides for building 1:1 current baluns. What about 4:1?