I am trying to recover my 2FSK signal using an SDR. I have centered the SDR modem on the median frequency (the virtual carrier) and captured my signal via some 90 kHz bw modem. THis is the recording of it below. You can hardly make out the sine waves from it. I have highlit one such sine wave - 56 samples @ 2.048 MHz sampling rate = about 36.6 kHz, which is close to what I am emitting. Should the necessary modem's bandwidth be in this case 2 * 36.6 + 19.2 (baudrate) = around 90 kHz ? 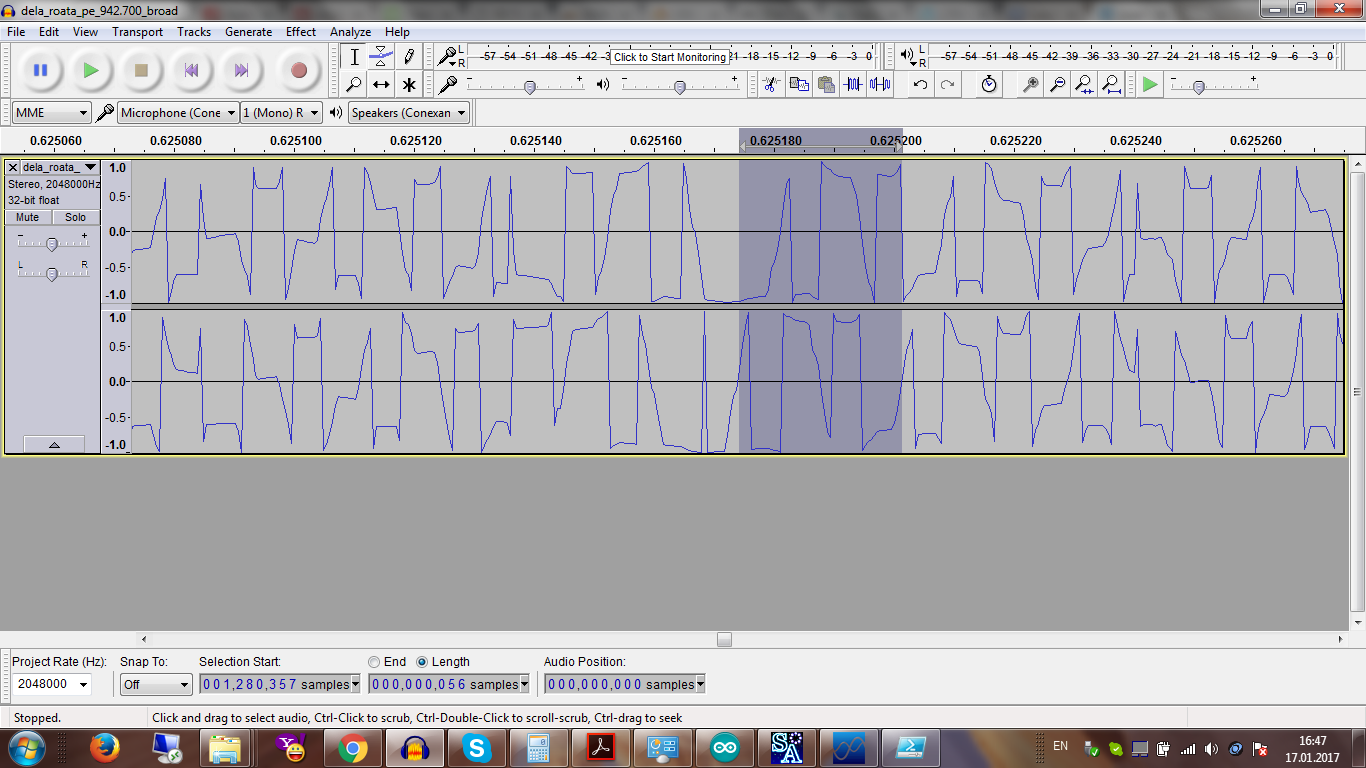 I am getting pretty much the same results with a 200 kHz bw modem. However, with a 250 kHz modem the sines are much better. But not quite perfect, like in the picture below. Am I seeing this artifact because of my actual signal's BW being wider than the calculated BW and even wider than 250 kHz or is it something else that I am missing ? 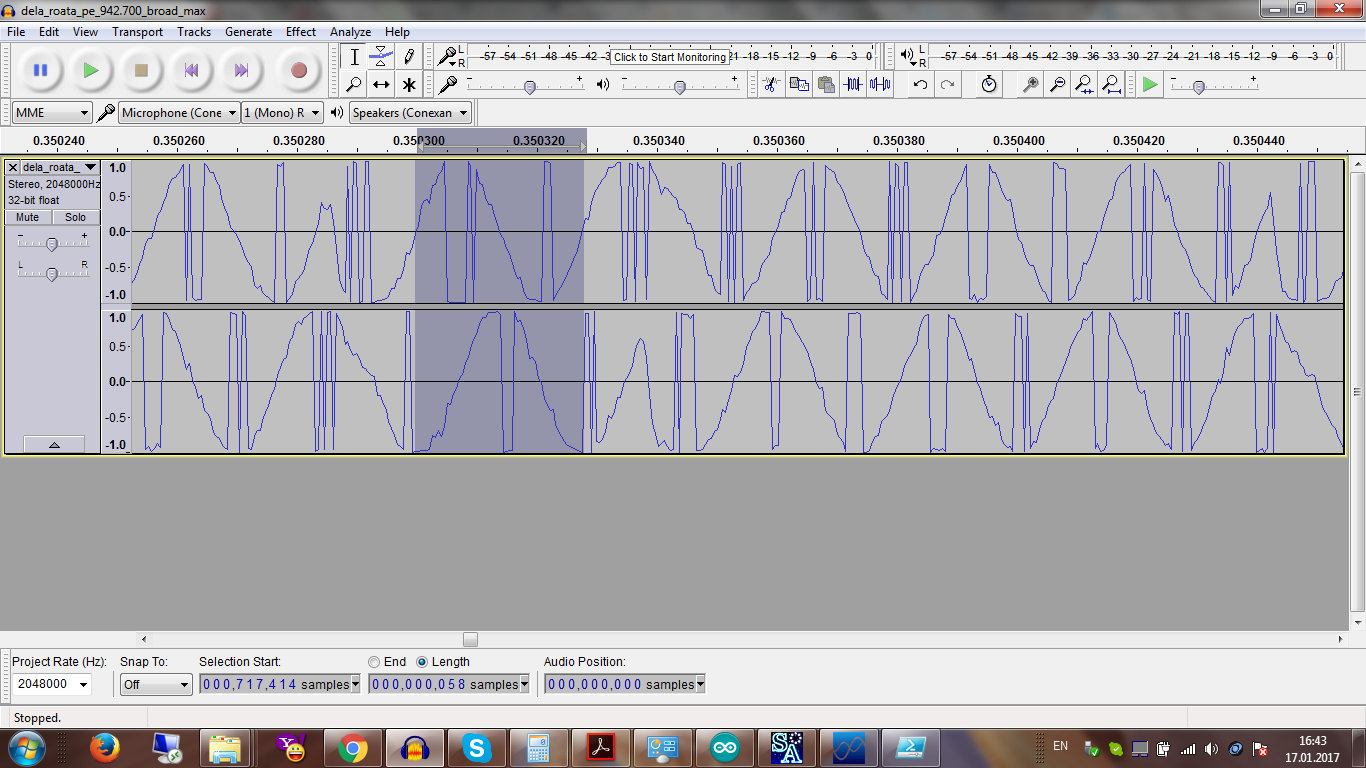 edit 1 Previously the RTL AGC was turned on and the Tuner AGC turned off (with RF gain set to 48 - almost to the upper limit). The following two new captures are from 250 kHz modem with Tuner AGC turned on (the only difference from second capture above). Funny what I am noticing. Here how the beginning of the message looks like 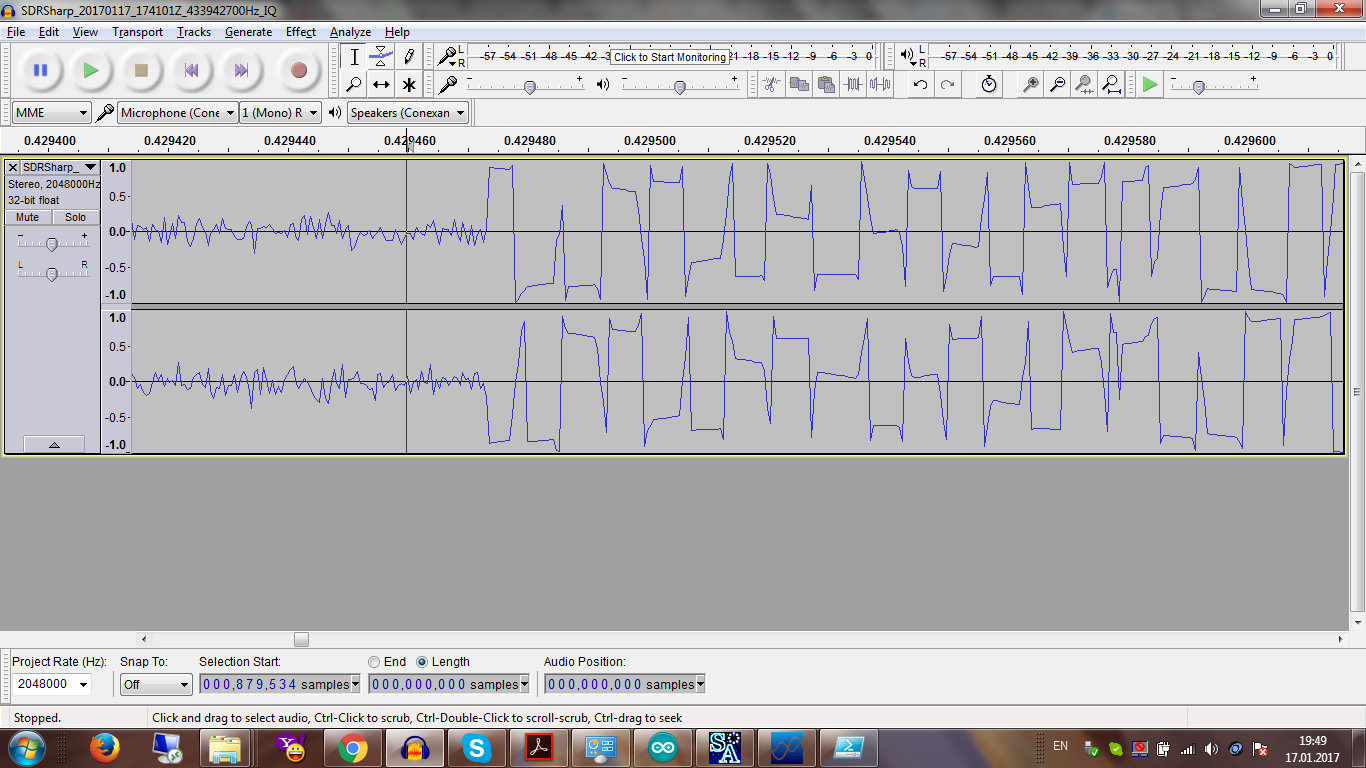 and here is the end of it: 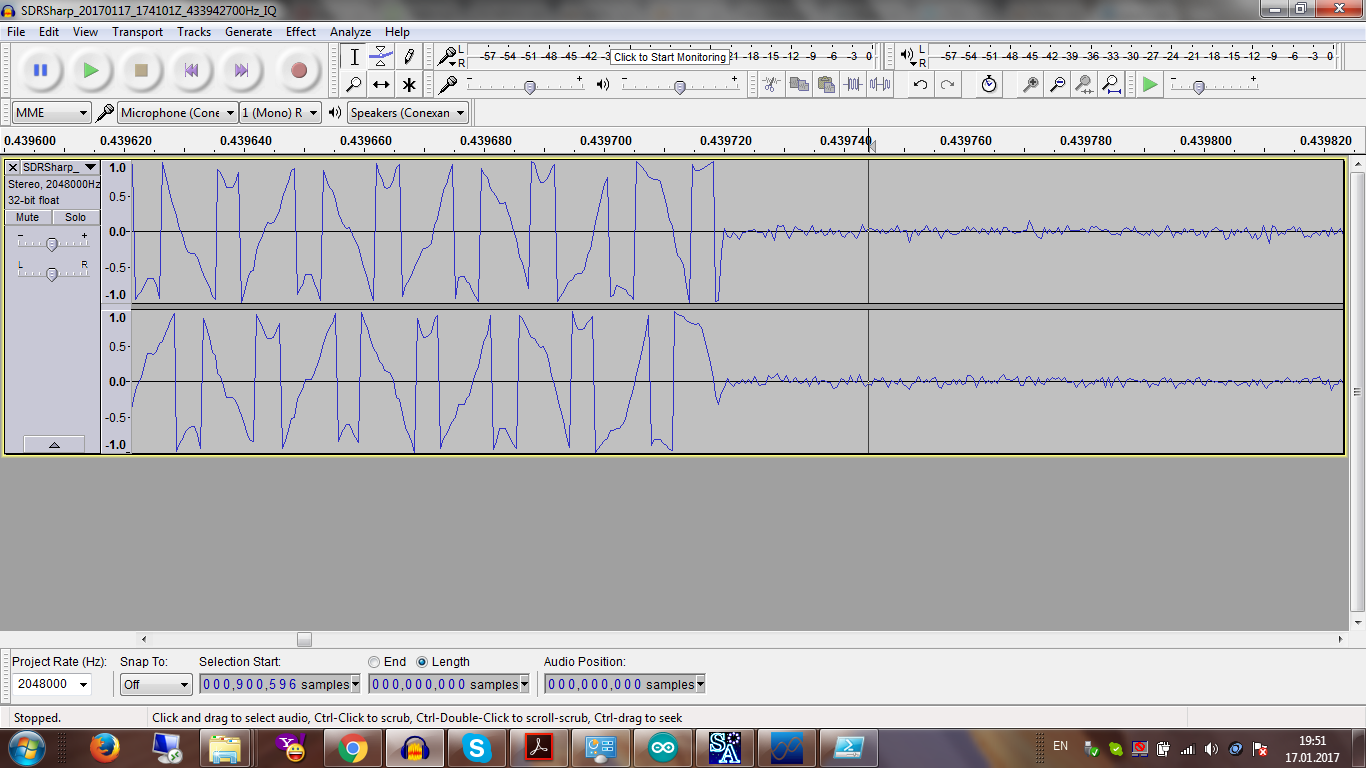 edit 2 MUch better looking now with AGC off. I had to turn off AGC to both RTL and tuner in order to be able to manually set it to a custom value. That custom value was the maximum: 49.6 db; my signal is pretty faint, At 16.6 db I was barely able to see it is there. 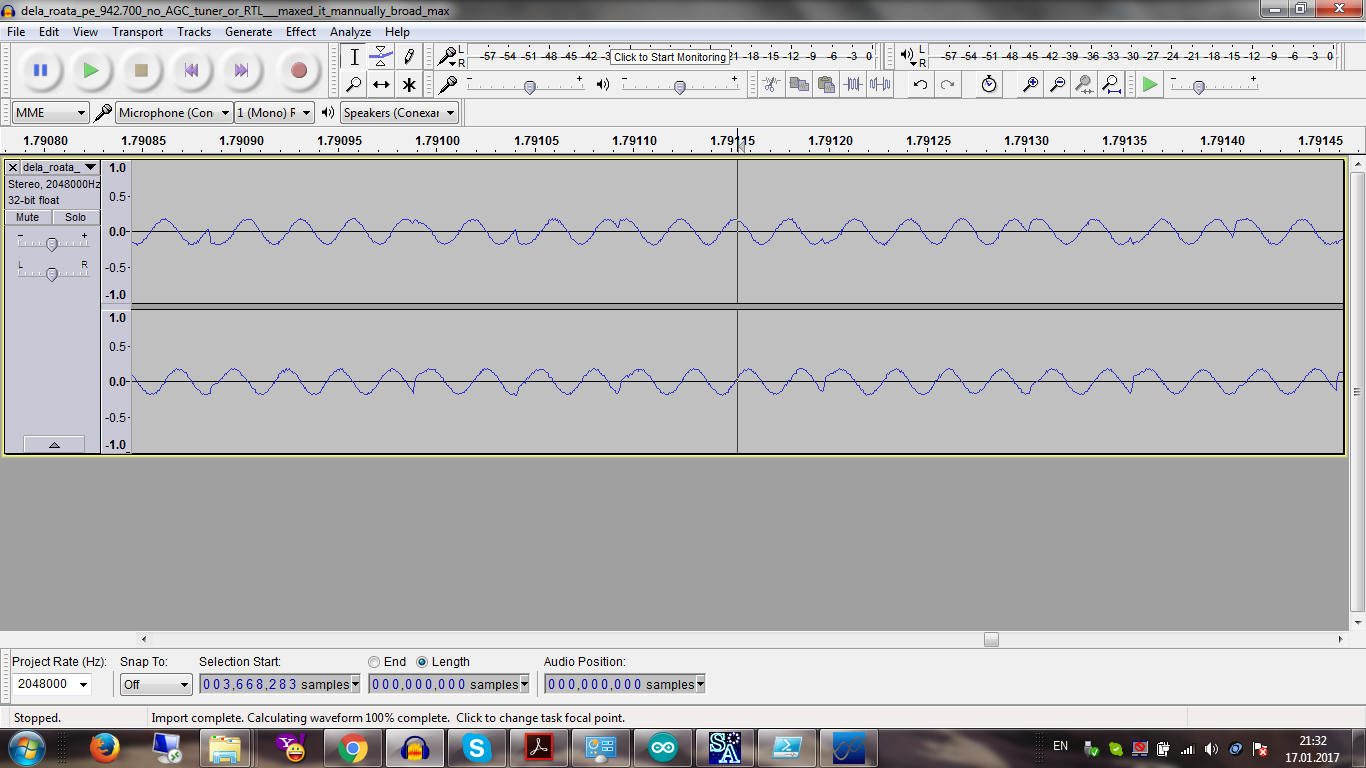 So, I asked you to reduce the gain and disable AGC (auto-gain control), and you asked my to explain why :)

That had the effect of the RTL chipset no longer "overloading" its ADC with values that lead to negative values in the DSP chain (which is integrated in the RTL chip, I presume).

Normally, an AGC jobs is to adjust the gain so that exactly that doesn't happen. I don't know why yours didn't do that – but it's very probable that the RTL dongle's AGC , being designed for TV, is optimized to ignore single carriers (e.g. interference and, in analog TV, pilot tones).

With that out of the way:

Don't you have a pretty signal! That's extrodinarily clean.

So, this is the old complex signal and positive vs negative frequencies business.

Because you've set your receiver to the center between the higher and lower (FSK) subcarriers, we see them at $+f_\Delta$ and $-f_\Delta$. Now, negative frequencies only exist in complex signals.

A complex tone of frequency $f$ is defined as

Then, Euler tells us:

or applied to our harmonic signal

So, the difference between a positive frequency and it's negative counterpart is only that the sign of the imaginary part is flipped. Flipping a sign is nothing but a simple 180° phase shift.

Furthermore, because you can't know the phase of the complex tone compared to your receiver's oscillator, the real part isn't actually a sine (a sine has value $0$ for $t=0$, right) and the imaginary part not really a cosine, but both are shifted by a random phase; that means that when you jump between $+f_\Delta$ and $-f_\Delta$, both tones make a phase jump (and not just the imaginary part). To know whether the frequency is positive, or negative, is however pretty simple:

A cosine is simply a sine, but with a "phase advantage" of quarter a wave, or $\frac{2\pi}4 =\frac\pi2$. So, all you need to figure out at any point is "is the real part $\frac\pi2$ in front of the imaginary part, or the other way around?", and BOOM, there you go, FSK demodulator :)

Not the answer you're looking for? Browse other questions tagged modes frequency bandwidth or ask your own question.

4
SSB demodulation
3
How to reverse engineer a proprietary FSK protocol
6
How does rpitx generate arbitrary SSB data with a clock peripheral?
1
transmitted FSK, sniffed something PSK-looking
2
FSK or M-PSK for weak signal communications?
0
Both OOK and FSK used in the same transmission
2
Signal frequency domain
4
Gnuradio bandwidth of sink cause signal frequency changed?
0
Does signal frequency affect the band width of SDR hardware?