I'm trying to build a 1/2 wave "Coaxial J-Pole" antenna, similar to what is described here: 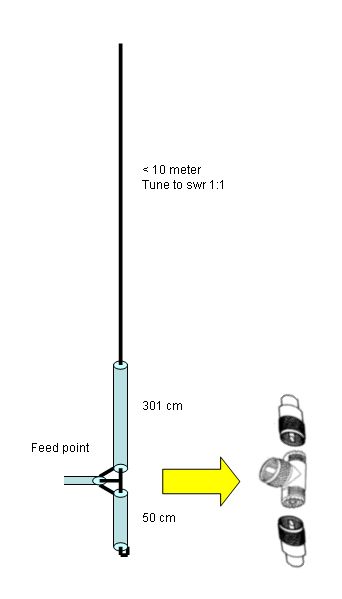 Such an antenna would be great for stringing up in a tree when operating remotely, no tuner needed.

The trick is that I'm trying to use 75Ω RG6 coax for the matching section (because it is relatively inexpensive and low-loss), but I want a 50Ω impedance at the feed point.

Succinctly: How can I calculate the physical parameters of a single-stub impedance transformer when the matching section impedance doesn't match either the feed point impedance or the load impedance?

You can do this graphically, with a Smith chart. Normally when using a Smith chart we divide all the impedances by 50 to normalize them to a 50Ω system, but you can divide by 75 (or any other number) and the results are just as valid. The Smith chart has the advantage of not requiring any complicated math, and also facilitating intuition into what matching strategies are possible.

You can also do the same with any transmission line calculator. Divide all the impedances by 75 to normalize them to 1, then multiply them by 50 to convert to what the calculator expects. Then perform the same operation in reverse with the answer.

Of course you'd need to know the impedance of the thing you are trying to match. More on that at the end.

As an interesting example, VK6UU gives an example of a 300Ω folded dipole matched to 50Ω by way of a quarter-wave section of 125Ω coax. 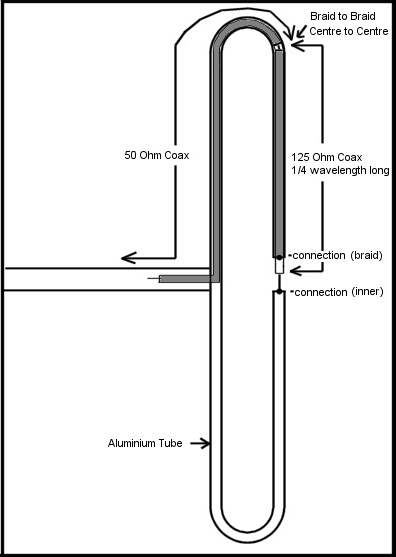 This works because relative to 125Ω, 300Ω and 50Ω are (approximately) duals, that is they have the same magnitude reflection coefficient, but 180 degrees apart. You'll notice:

A little more generally, a quarter-wave section of transmission line of impedance $Z_0$ converts between two impedances $Z_a$ and $Z_b$:

which can be algebraically solved for $Z_0$ as:

So for the special case of a quarter-wave section where you can pick the transmission line impedance, this is how you can match two impedances.

For arbitrary lengths of transmission line it is more complex, but if you remember that the length of the line changes the angle but not the magnitude of the reflection coefficient, then with a little trigonometry, it's "simple".

All that said, the design of this antenna, if it works as intended, seems to be using a quarter-wave transformer to transform the high impedance at the end of a half-wavelength radiator into a low impedance at the feedpoint.

If we are talking extremes and ideal components: an open circuit (infinite impedance) and a short (0 impedance), then a quarter wavelength section of transmission line of any characteristic impedance transforms between the two.

The impedance at the end of a half-wave radiator isn't infinite, but it is "pretty high", depending on things like the diameter of the wire, and in practice, trees, towers, the ground, maybe the feedline, and other surroundings. 75Ω isn't so much different from 50Ω, so if you use 75Ω coax instead of 50Ω we can still expect that pretty high impedance to be transformed to a pretty low one.

I'd suspect the difference is negligible compared to other details, so I would say just build the thing with 75Ω ohm coax, and you won't be so far off that you can't just incrementally adjust the length until you get a good match.

Not the answer you're looking for? Browse other questions tagged antenna-theory coaxial-cable impedance j-pole or ask your own question.

14
Where are the baluns for VHF and higher? How can one be made?
3
How do transmission lines affect the impedance of some arbitrary load?
2
Balun and tuner configuration for multiband dipole