What "test transmissions" are allowed above 51MHz?

The ARRL's band plan chart includes the following text in its legend:

Test transmissions are authorized above 51 MHz, except for 219-220 MHz

What FCC regulation is this referring to?

Aren't all ham bands available for transmitter testing and other experimental communications? What sort of "test" transmissions are allowed above this frequency but not below? (And is the cutoff really at 51 MHz, not 50.1 MHz?)

This is indeed in the FCC regulations. In Part 97, section 305 regarding "Authorized Emission Types" there is the following chart which lists two relevant subbands, see in the VHF group the 6m row and the Do ditto right below it: 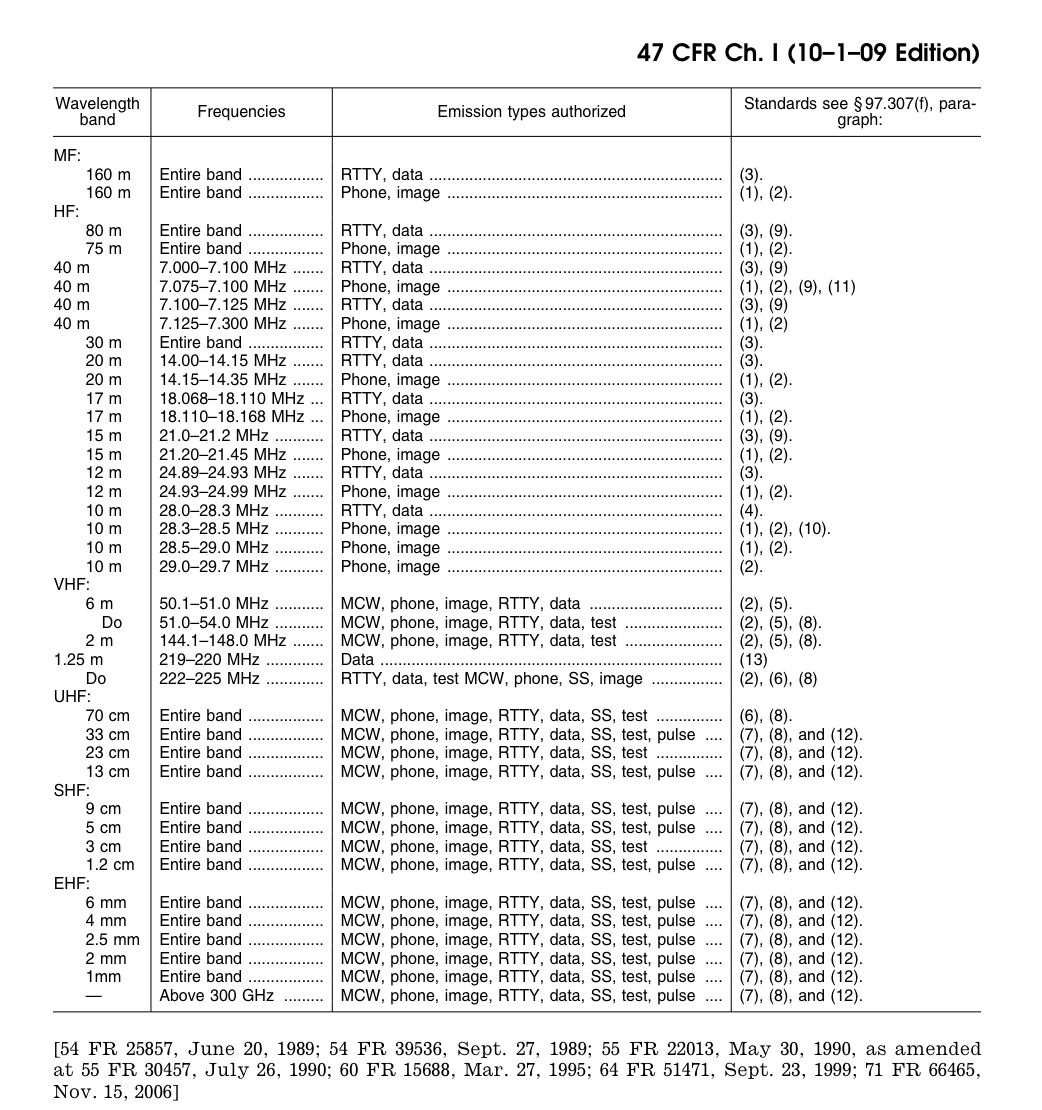 Tracing our way outwards from there, we find:

These answers are explored in more detail below.

Let's zero in on the difference between 50.1–51.0 MHz range vs. the 51.0-54.0 MHz range.* The first frequencies allow emissions of type "MCW, phone, image, RTTY, data" whereas the second allow all that and "…, test". This must be exactly what the ARRL chart is referring to. So yes, 51 MHz is the correct boundary for where "test" emissions may occur.

What is a "test" emission type? The definitions section of Part 97 says this:

The first applicable standard the two subbands here have in common is a general rule regarding allowable bandwidth:

So for 6m (and 2m and 1.25m) one needs to limit data transmissions so they fit within the same bandwidth as a phone transmission would use. (Note how this paragraph (2) is not applicable on 73cm and above.)

It's the next two standards that distinguish between what might be considered "data" and "test" signals.

Looks like we need to unpack this further! This standard refers to §97.309(a) and §97.309(b) to define what exactly counts as "data" in here. I won't paste those entire sections here, but in summary they allow:

For the standard which seems to apply to "test" signals, we find:

To understand this paragraph we actually have to jump out of Part 97 and in to Part 2 of the FCC's 47 CFR to learn their definitions of "Emission, modulation and transmission characteristics". If you do so, you'll find that there's not much that all those letters and numbers leave out. (For the life of me I can't figure out what the "E" modulation type is, but the others cover AM/SSB/FM/PM for any sort of baseband signal for any sort information….)

Note that this paragraph (8) standard is much broader definition than the overall "test" definition above, in that the third symbol is pretty much a wildcard, rather than the "no information" N symbol that test emissions in general are restricted to.

To re-summarize the deep-dive above, I think the distinction is that:

Except as specified elsewhere in this part, an amateur station may transmit a CW emission on any frequency authorized to the control operator.

(Or, having read through this entire answer, you might have lost all sense of wonder, entirely ;-)

Building on that previous answer,

All test transmissions are covered under Sec. 97.119 Station identification:

Test transmissions must not cause interference, of course, and may be for purposes of tuning new equipment or verifying a propagation path.

No matter the purpose, this section is very strictly applied to all amateur emissions.

10
What is emissions designator "E" when used as a type of modulation?

5
What frequencies am I not allowed to use north of line A in the USA?
9
Is Morse code allowed on FM in the USA
12
What are the (US) rules about unlicensed low-power transmissions?
10
Aside from repeaters, what station types allow automated transmissions?
8
What is the permissible frequency error for US amateur radio transmissions?
10
What is emissions designator "E" when used as a type of modulation?
0
Are there restrictions placed on transmissions in licensed spectrum in the United States?
6
Using radio for musical collaboration -- the line between conversation and broadcasting
3
Can you base64 encode or compress ham transmissions [US]?