I thought maybe this was a 4:1 balun, but a number of 4:1 single core balun diagrams that I found online had different connections. N1HFX's balun page and the bottom of G4WPW's page show a connection of one wire directly from the balanced to the unbalanced side. The pictured balun does not have such a connection.

There is only one core and the connector at the bottom is an SO-239. I may get a chance to test it later on with a 50 ohm load and an impedance tester, but at the moment this balun is not in front of me.

Is this a current balun or a voltage balun?

What should the impedance ratio be? 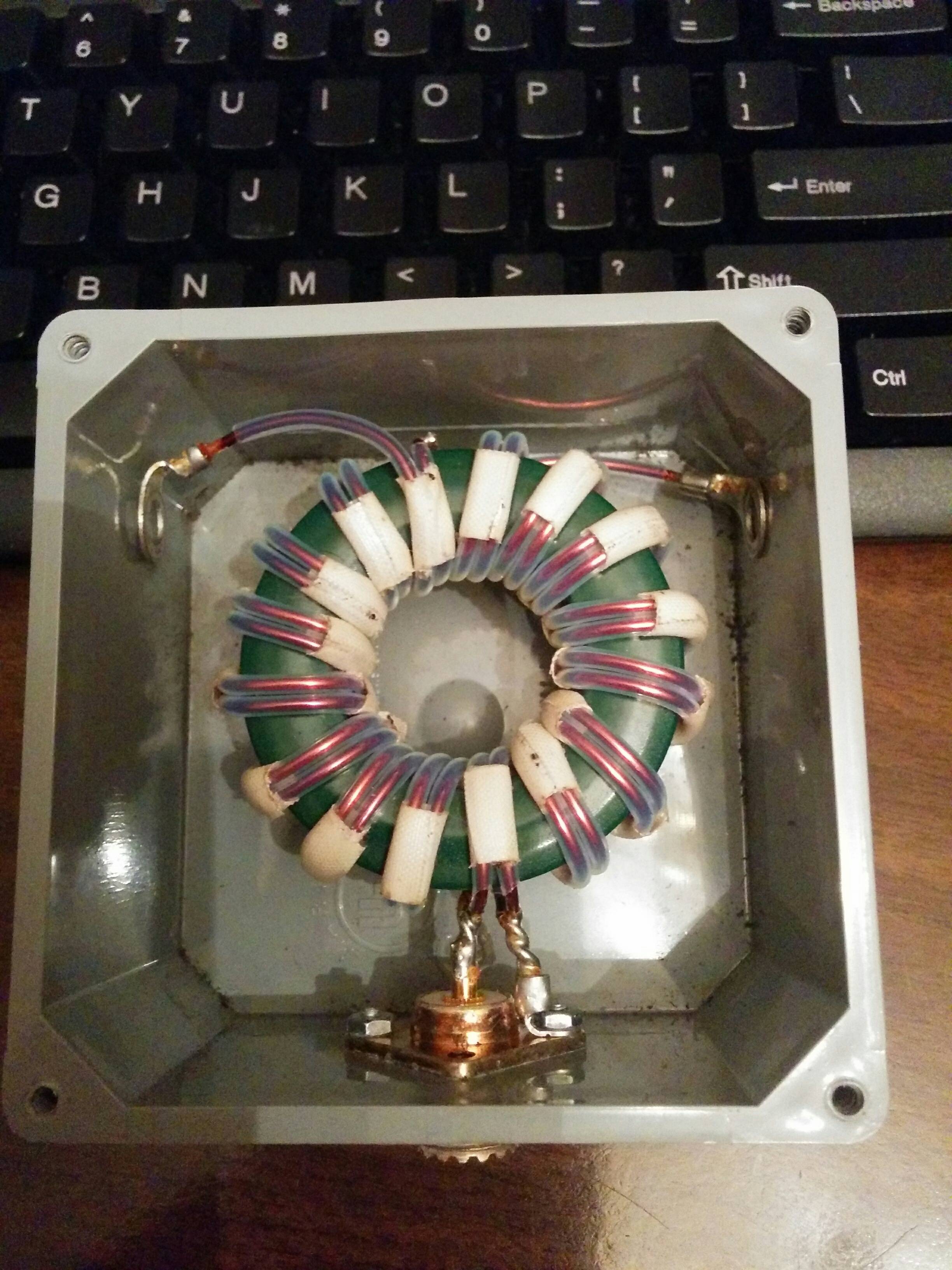 Looks like it might be a clever way of winding a 4:1 voltage balun to simplify the wire routing (or just straight up incorrectly wired). I'd have to see the connections at the top more clearly to be sure.

Regardless, seems pretty safe to assume it's a voltage balun. The quick way to tell would be to check it for a DC short between the terminals on the unbalanced (or balanced) side. If they're shorted, it's a voltage balun, and as such, not much of a balun at all. The choking impedance from these single core 4:1 voltage baluns is so low (usually <500 ohms) as to be nearly useless unless your antenna has low enough impedance that yo don't need the 4:1 to begin with. W8JI and K9YC have both done good tear downs showing just how awful they are for most applications. They should be considered an impedance transformer and not much else.

EDIT: drawing out the windings, it appears it is an attempt to shoe-horn a 2 core Guanella 4:1 current balun on to a single core. Figure 2 here shows how it would be accomplished with two cores, and the builder appears to have just decided to do a split winding on a single core, perhaps in an attempt to get the best of both worlds, good common mode isolation and a 4:1 transformation on a single core. In reality, I would guess this actually causes it to exhibit less than a 4:1 transformation, in addition to having little common mode suppression. It appears it would exhibit considerable shunt capacitance between windings, and depending on the core material, potentially a low impedance shunt path through the core.

Not the answer you're looking for? Browse other questions tagged balun or ask your own question.

8
How is a 1:1 current balun different from a choke?
9
Does a balun need to be made with coax?
2
How do you construct a 1:1 balun?
6
Why do we distinguish between balanced and unbalanced?
1
Folded balun, impedance matching
2
Power Amplifier Balun Question
6
Coax or bifilar windings for a choke?
4
Dipole increased CM current using choke balun
4
Actual Impedance of a folded dipole at resonance
6
How much attenuation (dB) from a balun is expected?