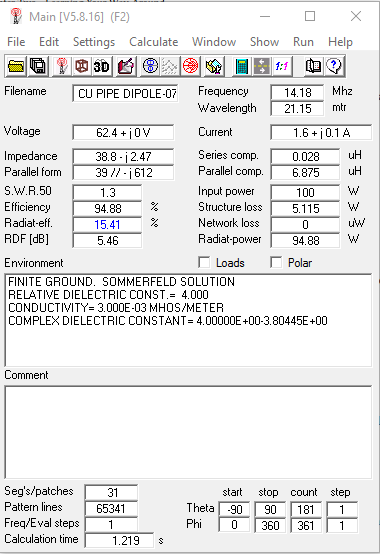 I'm a NEC2 user, never used 4NEC2, but I think it's the same engine underneath.

The radiated efficiency is low because either: - a lot of power is absorbed by the ground, or - you have a structure error, usually a violation of the guidelines near the feedpoint.

There are two ways of calculating efficiency.

The first just considers the currents on the structure. NEC doesn't use a power excitation, we specify a fixed voltage source excitation. NEC2 solves for the currents on all the segments. The input power is found by multiplying the applied voltage with the feed-segment-current found in the solution. (The 4NEC2 interface must be scaling the calculated input power to get your specified 100 W, fair enough). NEC2 also finds all the losses in the structure, from loads if any, and from the losses in the structure, as you've specified a finite conductivity. These losses I think will account for the 5 W and the 94%. NEC2 prints out all of this - input voltage and power, losses in loads, losses in wire, etc. The remainder of the power must have been radiated. If the structure is close to the ground, the interaction matrix is also modified to take this into account, but I'm not sure if these ground losses are included in structure loss. A problem can arise when there is a modelling error, especially near the feedpoint, that the current found on the feed segment is not accurate. This leads to an incorrect input power, which upsets all the other power and loss calculations.

Second, from the far field patterns. The far fields are calculated from the currents on the structure, including the full lossy reflection from the ground if present. This is not a loss in the antenna, but a loss in the radiating EM waves. In the far field there are only TEM waves, and power density can be found from the electric field. NEC integrates the power density of the antenna pattern, over the sphere, or in your case the half-sphere, and finds the total radiated power. This power I think is coming out to be the 15 watts that you see.

The total radiated power is a reflection of the current on all segments of the model, and is usually more accurate than the calculated input power. It also includes the ground reflection losses.

Modelling errors If you have a modelling error, it is possible that for example the actual input power to the structure is really only 25 watts, with 5 lost in the structure resistance, and 5 lost in the ground, 15 radiated, but somehow the current on the feed segment is incorrect. This has a small impact on the patterns, as there are many segments, but a large impact on the calculated input power, as this is done with only one segment.

Some modelling notes: I can't see much about your antenna model. If your model is simple, like a dipole with 5 to 10 fairly constant radius segments, then there will be no problem with the feedpoint impedance calculation, and the ground loss will be the cause of the power difference you see. If you have 31 segments as it seems to say, then make sure they are nice and thin, like a wire dipole. A pipe dipole shouldn't have so many segments. And the feed segment should be the same length and radius as its neighbours.

A test to try: change your sommerfeld - norton ground to a perfect ground and confirm that structure efficiency matches radiated efficiency. Or set the structure conductivity to infinite (just leave it out) and see what happens.

I just did a bit of tinkering with 4NEC2 and I've got an answer.

The Input power is the power generated by the source, and ignores all losses. It might also be called "Total power".

The "Radiat-power" calculation in 4NEC2 is the total amount of the power from the source that is not dissipated as resistive losses in the feed system or antenna structure. Essentially it is the power that is not lost as heat in the antenna system itself, and it ignores external loss from the ground in the near field. It might better be described as "available power", and it is the maximum power that could be radiated.

"Radiat-Eff" is the effective amount of power that makes it in to the far field, and can be thought of as "useful power". It takes in to account destructive interference from interacting elements of the antenna as well as ground losses in the near field.

We can confirm this interpretation of the numbers by running the same basic model with a few small changes in wire characteristics in each iteration. If we build a simple resonant 1/2 wave 20 meter vertical dipole from 1mm diameter wire, oriented a 6 feet above "real" average ground using ideal wires (no wire load/material specified), we can see that "radiat-eff" is quite low, around 25%, but "Structure Loss" is 0, and "Radiat-power" is 100w. Changing the length of the wire to a non-resonant length, moving it up or down relative to ground, changing wire diameter or antenna polarization, etc has no effect on the radiated power and structural loss, but radiated efficiency does change.

Similarly, placing a 0.6 wavelength ideal (no load) wire in parallel to our vertical dipole and spaced about 9 feet from our dipole, we've formed a vertically oriented, ideal 2 element yagi. Radiation efficiency drops by about 2% to 23%, which is not surprising. This decrease in radiated efficiency in a model with no structural losses is due to increased coupling to the very lossy ground, owing to the now larger surface area and aperture of the antenna. Our structural losses are still 0.

If we remove the reflector and place a wire load on the original dipole and specify it as "copper" we can observe a small drop compared to the perfect dipole, from about 25.2% "radiat-eff" to around 24.9%. Structure loss becomes non-zero, in the case of my test model about 1 watt, and "Radiat-power" is now 99 watts. Changing wire diameter has the expected results of increasing or decreasing resistive losses. A small part of the input power has been lost as heat in the wire itself. Logic might suggest that a loss of 1 watt (or about 1%) in the radiated power should result in a loss of 1% in the radiation efficiency as well, but the relationship between complex impedance, power, and losses often isn't linear in antenna systems. Ground losses are so dominant in radiation efficiency that resistive losses are tiny by comparison.

If we put an ideal reflector back in to the model beside our now "realistic" vertical dipole with resistive losses, "radiat-power" changes, but not by very much, jumping from 1.08 watts to about 1.5 watts. The radiated efficiency falls considerably though, from 24.9% to about 22.75% (note that this is slightly lower than the ideal yagi), or about 3 times the increase in structural loss. We can now see the original increase in losses in the ideal yagi due to ground interaction, plus a small increase due to increased structural losses.

We might logically expect that the "ideal" reflector, while decreasing radiated efficiency, wouldn't change structural losses, since that part of the structure experiences no loss. However, the model assumes that the current is distributed on our vertical dipole more or less in an ideal way when it is the only element in the model, meaning that total surface area and such are something close to maximized. When you inject another element, whether that element actually generates real losses or not, you alter the current distribution on the element that does experience structural loss, resulting in an increase in current in some areas and a decrease in others. This is due to things like proximity effect, asymmetrical coupling of power between physically separated surfaces of different elements, etc. This redistribution of power is usually (but not always) to the detriment of antenna efficiency because it makes the wire effectively smaller. However, it is possible to take advantage of this effect to "balance" a conductor on which the current would be "crowded" in some areas due to geometry, but that's a lecture for a different day. I suspect the extra 0.5 watts of loss is due to proximity effect pushing some of the current off of the portion of the lossy dipole that faces the reflector, and on to the side opposite the reflector, reducing the wire's effective diameter, however this is just a theory. 4NEC2 does not have sufficiently detailed FEA to actually see cross-sectional current distribution on a single conductor, and the model that might allow us to test that theory within 4nec2 would be rather complex.

If we add a wire load to the reflector element we see that the radiated power drops again by about 0.6 watts, or ~0.6%, but the radiated efficiency drops by considerably less than that, just 0.1%; The same non-linearity we saw before, with changes in ground interaction dwarfing the structural losses, is responsible.

In summary, Radiated Power ignores all losses not inherent to the antenna and feed line conductors themselves. If you specify wire material, it will always be less than input power, but otherwise it will always be the same as input power. Radiated efficiency is a much more complex calculation that considers ground losses and field interactions in the near field, and likely field interactions in the transition zone between near and far field. We can confirm that it is considering field interactions by running the "realistic" vertical yagi model with a perfect ground. Doing so reveals a small disparity between Radiated Power (97.91 watts or 97.91%) and Radiated Efficiency (97.79%). That 0.13 watts is lost due to cancellation of fields generated by the two elements.

Not the answer you're looking for? Browse other questions tagged antenna-theory software jargon antenna-modeling or ask your own question.

7
Is there a standard data format for station/channel/band information?
3
Open Source Library for Digital Mode
2
Dual-band rubber duck gain on 2m vs. 70cm
5
Antenna Efficiency
5
Why does not a bigger antenna receive more power?
3
Gain difference between half-wave and infinitesimal dipole?
1
Raising height of inverted V by 2 meters
5
Modelling a folded dipole
2
Is there a way to get FreeDV output level to follow the input audio amplitude?