What is a good way to bench test a mesh network?

I've been experimenting with some 2.4ghz based mesh networks similar to http://hsmm-mesh.org/. I'd like to have something on the bench where I could simulate roving between nodes, and create hidden nodes and varying signal strengths.

Is there a better solution than a network of coax cables with splitters and attenuators (variable and fixed)? Any pitfalls in this approach (I'm turning the power way down and using a lot of attenuation)? Any suggestions on how to build a setup like this without breaking the bank (the attenuators and splitters get expensive!)?

You can simulate. The idea is to model your RF channel(s) numerically by adding things like AWGN, multipath, clock skew, and so on. And, you want a way to model a lot of these channels, and twiddle the parameters and see how the system responds.

There are many software libraries out there that will make this easier. I'd suggest GNU Radio. It has blocks that can be chained together to model an RF channel, and blocks to implement most basic digital modulation schemes. It has a graphical interface where you can connect them together, which is good for experimentation, and it also has bindings to several programming languages so you can automate the creation of a complex network of channels and implement your own blocks. It also has blocks to interface to real hardware, like the USRP, or an audio card that can in turn interface to inexpensive SDR platforms like Softrock. 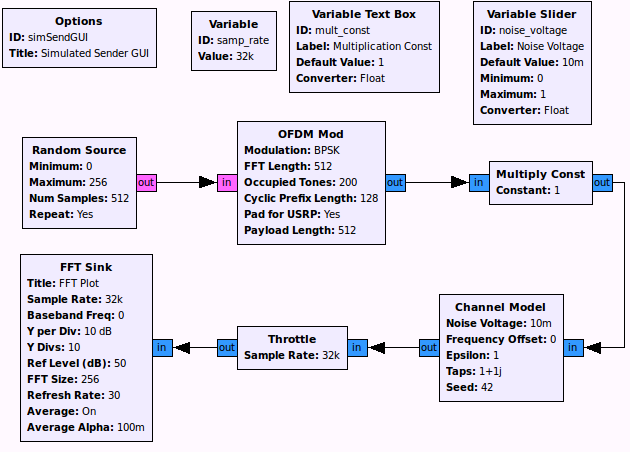 If you also want to simulate the OS running the hardware on your nodes, you'll need a somewhat more powerful computer, and a way to programatically create virtual machines. Again, many options, but for an easy start, I'd look at Vagrant. With this, you could conceivably create a handful of virtual nodes, each running virtual RF interfaces implemented by GNU Radio.

Not the answer you're looking for? Browse other questions tagged mesh-network microwave or ask your own question.

5
What is a general procedure for aligning directional antennas?
1
Logging a contact over a mesh network
6
What is this large, flat microwave coaxial connector?
0
How to test Line-of-Sight radio at 5GHz at range 25Km or less?
6
What is Hinternet, in simple terms?
7
LoRa radio transceiver for PtP mesh?
5
What is the best approach for measuring return loss of a home-made 3cm horn?
3
What are the parameters and necessary features of a Gunn diode oscillator cavity?
3
2.45GHz: constructing a horn of *thin* steel, what are good ways to join the edges (at least one joint along corner?)
1
What are the properties of the radiation of a magnetron?