I am living in a small compartment, considering setting up an antenna indoors. As my room is so small (3m^2), thinking of putting a dipole antenna with soft wire indoors.

If two ends of dipole antenna are pointing to the same direction. Will the signal be cancalled?

From an antenna theory perspective, if you've bent the wire it isn't a dipole antenna any more. You've changed the shape of the antenna away from a dipole, so it will have a different radiation pattern than a dipole. The exact results will depend on what specifically you did.

However, the results will not be “the antenna no longer works”. It will just be different, and somewhat less efficient — as is any antenna folded or coiled to fit in a smaller space. But you'll also have pattern changes and losses from putting the antenna indoors — all structures interact with radio waves somewhat, even if they contain no metal.

(You can use antenna modeling software to see the results of using a particular shape, but this does not account for the characteristics of the surrounding walls and ceiling.)

Practically, don't worry too much about the antenna shape, just spread it out as much as you can. Bending an antenna to fit inside an apartment is a very common thing to do. Remember that the antenna will have a different impedance than an ordinary dipole of the same length, so don't use a pre-designed antenna and expect it to work as intended this way; expect to need to tune it (by trimming the ends, or using an antenna tuner or custom matching network).

Also consider, instead of a dipole, a wire loop around the entire perimeter of your ceiling — on the principle that this is the biggest antenna you can put up in your space.

I too have a small room and can not put my antenna outside or in the attic. My solution was a flag antenna mounted around the room. The flag or pendant antenna when used outdoors is rectangular and supported by two corners often with weights on the other two corner thus the name flag. (sometimes called a pendant) I ran a thin wire around the room below the crown mold. If you google flag antenna you will find several. They use a transformer at the feed and a resistor in the center. The resistor is adjusted to match the antenna to the receiver. This design was developed by the navy in the 1940s for shipboard use and later for portable use. 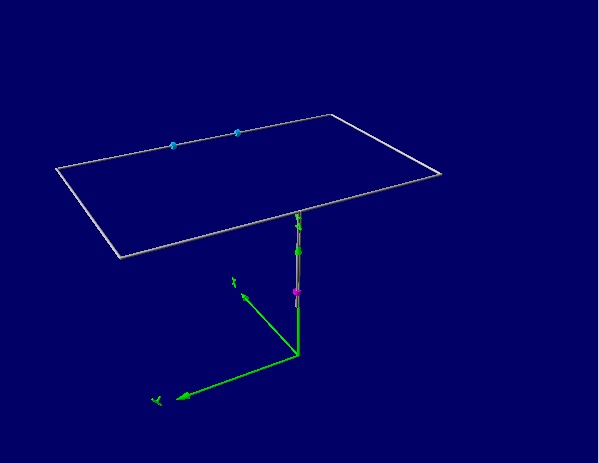 It may not be as good as an outdoor antenna but I listen to the net login from a the southeast. Fla,Tenn,Texas and Arkansas. I have a 1.2Kohm resistor between the two dots and a 29T:9T transformer wound on a 1/2" yellow toroid.

The radiation pattern simply changes depending on how much is bent and if the ends of a dipole are bent nearer ground or to the side where ground reflection is uniform. Fine tuning can be done by angle of bend.

From a figure in the QSL Bent Dipoles site for “Bent Down Ends”: The 4NEC2 modeling shows as the bend point is increased to 50% length, gain gradually goes down little more than a half dB. SWR goes down to a minimum at 60% and rises at 50%. Shorter than 50% the SWR rises quickly. The total length of wire necessary to maintain resonance gradually increases up to the 50% bend point then decreases past that.

The associated polar graph and 3D picture at the 50% bend point show a typical dipole shape only slightly fatter than a standard dipole. Two other 3D pictures show separately the major horizontal radiation and the smaller amount of vertical radiation from the bent ends.

Quoting “The modeling software makes it clear that you can bend the ends of a horizontal dipole with very little change in antenna performance, just some retuning is required”.

Looking at another figure: “Dipole, Laterally Bent-ends”, modeling shows that when bending to the same side, the decrease in gain is the same as a bent down dipole. The length of wire to maintain resonance will increase up to around 3% as the bend point approaches 50%. SWR shows a minimum at 60% bend rising rapidly past 50% bend.

Another figure about bending to opposite sides is noticeably different. In this form the gain drops only slightly until bends reach 50% to 30% but does not rise “off-the-map” like same-side antennas. SWR is lowest when the dipole is 60% long at the bends then rises 30 % and interestingly falls again because the long bends are radiating broadside which skews the RF pattern. The amount of wire needed increases steadily to over 4% longer as the bend points reduce the dipole to less than 40% length.

For fine tuning near 1:1 SWR, changing the angle of bend has the effect of changing the resonant length of the dipole. With right angle bends in the same direction: Rule

The above information comes from a web site about 4NEC2 modeling of the many ways to bend a dipole for space limited situations. Here is the link.

Consider also selecting Folded-end dipoles. And, if you sometimes like to think out-of-the-box, take a look at zig-zag and particularly multi-catenary techniques that are so set-up tolerant yet and perform so well.

2
Interference generated by antenna placement?
5
Running ladder line through window from inside shack to outside dipole antenna - what to watch out for?
0
Amateur Radio shack/antenna considerations during house construction
12
What kind of antenna is that one?
1
Will close-loop metal hangers affect antenna radiation?
4
Dipole loading coil winding directions?
1
Beam antenna changed directivity
1
What is the formula for coupling between non-parallel wires?
0
Loop a long wire antenna or EFHW
3
Receiving the ISS SSTV: dipole antenna configuration and orientation