I'm building NorCal's / W6JJZ's BLT tuner (pdf) for use on 40m/20m with a 5W transmitter. I would like to remove the LED and use a small panel meter instead. 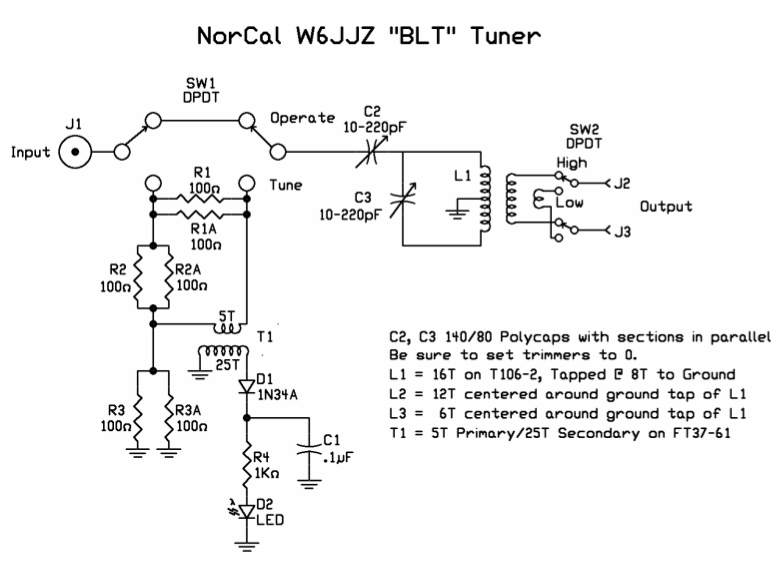 First, consider how the circuit works. It's a Wheatstone bridge, although you might have to squint and turn your head to see it. Think about how "Tune" is a connection to ground through what should be a 50 ohm impedance. Here it is redrawn a bit: 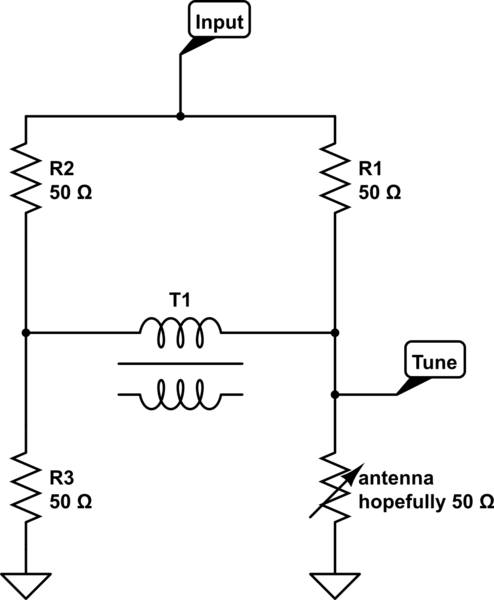 When the antenna isn't 50 ohms, then it is not the same voltage divider as R2 and R3, and so there is voltage across T1.

The bit with the other half of T1 and the LED is essentially an AM detector. Think of it like this: 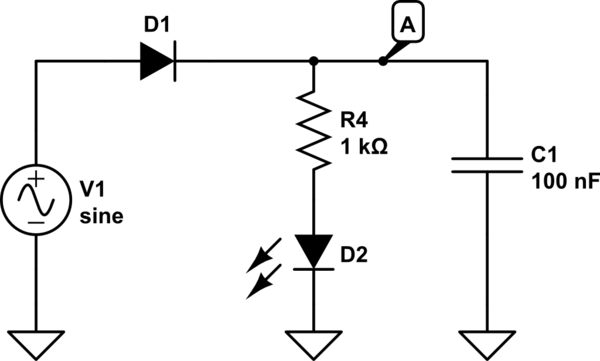 D1 rectifies the input: when V1 is at its maximum the diode permits current to raise the voltage of node A by charging C1. When V1 swings back down the diode is reversed biased so the only path for current out of C1 is through R4 and the LED. So the voltage at A is approximately the peak voltage of the voltage source.

Of course the voltage source is actually the secondary of T1. The winding ratio of T1 helps to generate a higher voltage for the detector so it's better able to overcome the forward voltage of the diodes.

The selection of D1 isn't terribly critical. Anything that rectifies will work here. Even a razor blade could work. Ideally it will have a low forward voltage and a fast recovery time, but if it doesn't it just means it will be harder to light the LED, so you may not be able to tune as precisely. 1N34A is a germanium diode which has a lower forward voltage (around 0.3V) than silicon diodes (around 0.65V). Germanium diodes are an antique item these days. You might have better luck finding a Schottky diode, and it will probably work better too.

But if a 1N4148 is what you have and it works acceptably, then go with that. Nothing bad will happen.

You don't strictly need C1 either, but it might make the LED brighter. Without C1 the LED will only blink, but with C1 it can charge up and power the LED though the entire AC cycle. You can also think about how C1 lowers the AC impedance of the detector circuit, enabling it to draw more power and thus make the LED brighter.

Calculating R4 is pretty noncritical. You want something that's high enough to limit the current through the LED so it doesn't go up in smoke, but low enough that the LED is bright enough to see. Ideally you want the time constant of R4 and C1 to be long relative to the frequency so the capacitor doesn't discharge much between cycles. But the time constant shouldn't be so long the LED continues glowing long after you've reached a good tuning.

Now it should be apparent how you might adapt this circuit for use with a panel meter. Depending on the kind of meter you have and how sensitive it is, you might even forgo the transformer, and instead put the meter in place of T1's primary in series with a rectifying diode. Otherwise you might play with the winding ratio of T1 to make good use of the meter's range, and you can replace R4 and D2 with the meter.

That diode has only rectifying jobs - so any diode that can withstand the powers and voltages to expect, and which has a sufficiently low forward voltage, should work. Also, recovery time is critical. If that recovery time is too low, the bandwidth of rectification would drop.

anyway, the 1N34A is a Germanium Diode. Let's call that "Retro". As far as I can see, your 1N4148 is superior in every single specification, so go for it.

Traditionally, Germanium Diodes have a lower forward voltage, something that took silicone technology quite a while to catch up. However:

1N34A (it's impossible to come by a datasheet of that diode that has a U/I curve – strange. Or well, might be due to high production variances!): 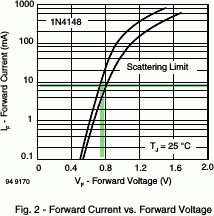 At least for the forward current of 5mA, the maximum expected $V_F$ of the 1N4148 seems to be at least 0.2V smaller than that of its germanium competitor.

Would I still need C1? It seems to work fine without.

Yes, C1 is critically important: Together with the differential resistance of D1 and the current sourcing capabilites of the signal passing T1, it builds a low-pass filter, and hence, has the job of averaging.

Now, with a not-as-retro LED that might be much more photon-efficient at pulsed operation than what might have been available to someone at design time of a circuit that includes a Germanium Diode, this might work without. You still get a better (read: less-noise) output with some 100nF, so keep that.

How do I calculate the value of R4?

to be honest: This looks like it was chosen due to availability and not due to calculation. Simply measure the voltage over C1 if not connecting any R4, and derive from that.

Anyway, for your instrumentation, it might be a good idea not to worry about that too much: just replace R4 with a series of three resistors to get a voltage across the middle one, use an opamp to amplify / buffer that so you can drive your instrument without interfering with your signal. Choose the values of these three resistors in a way that ensures the voltage at the top of the middle one won't fry opamp. Using a clamping diode as overvoltage protection might also be a good idea.

1
Tuning an antenna with cold weather