I purchased a Yaesu FT2900,a mobile antenna and mount. The install question is for a 2016 Chevy Cruze. Is there an easy way to run the power cables from rear of radio to the forward engine compartment?

Welcome to ham.SE, and congratulations on the new mobile rig. Alan K0BG has an excellent website that has everything you might need to know about installing a mobile radio and operating mobile. His page about wiring and grounding recommends drilling a new hole through the firewall, if there isn't a spare hole available, and using a rubber grommet to prevent chafing to the wire, which could start a fire. He also recommends fuses on both the negative and positive leads to the mobile rig, and connecting the negative lead to the same chassis ground point as the vehicle battery's chassis ground point.

While you're perusing Alan's site, also be sure to read his installation notes page, which has lots of other stuff you'll want to read.

I don't know if you'll consider Alan's recommendations easy, but if you follow them you'll have peace of mind from knowing that you've done the job right and that the installation will be as safe as possible. Good luck and have fun!

I agree with the suggestion of Alan's sites for mobile installs. Actually, Alan has a few photos posted of my installed antennas and rigs.

I also have a Chevy but it is a Silverado 3/4 ton pickup truck. I went to a local retail business called "Car Toys". It is a chain of stores over west coast states and I think they have a few in Texas and Colorado. But, that is not the point, the point is that I paid someone to do what I wanted to have done.

My install was a 100-watt HF Transceiver, Icom 706 MkIIG, and a Yaesu FT-7800R 2 meter, 70 cm, transceiver. The job of the Car Toys business was to run new wires from battery to the rear crew cab section of the truck coming in under the floor through a hole drilled by them. The hole was protected with rubber grommet and after installation a thick liquid plastic stuff was inserted to seal the hole from water. Current capacity of my wires was 80 amps as I was thinking of also putting in a 350 watt linear but I never did that. Car Toys, as a business was very skilled in this sort of thing as putting in high-power audio amplifiers was a good part of their business.

I also have them drill and install a extension coaxial connector into the floor board that I could hook PL-259 connectors to it for my HF mobile antenna (HiQ 4/80). I have photos of all aspects of this installation and would be willing to share or even post here if there is interest. However, this one particular photo shows the main parts: 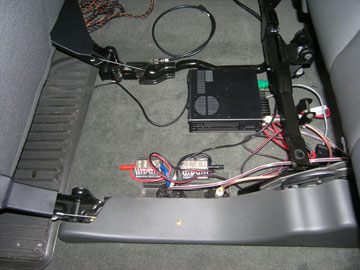 The view is under the seat (which is lifted up and out of the way) of the rear seat of the crew cab of the pickup truck. The lower part of the photo you see the power distribution units where the red and black wires are connected. The power cables come up through the floor board where they run along the chassis frame from the engine compartment (the firewall is never pierced). You can just barely see where the cables come up. Just to the right of that spot is my coaxial connection for my HF antenna which comes up through the floor. The coax runs along the chassis frame (inside cable wrap) and to the rear part of the pickup truck bed where it comes up through the bed floor to feed the HF antenna. The black box you see is the Icom IC-706 transceiver with the control panel remote up front with easy access to driver.

Since this photo was taken, I have made one other change and that is installing a West Mountain Radio power distribution strip (fused for each circuit) using Anderson Power-pole connectors for all rigs and power needs. Not shown is that the base unit for my Yaesu 7800R also sits there under the rear seat. Both rigs are velcro stuck to the carpet so that they will not move around.

In addition I had grounding straps placed at about 6 key spots on the undercarriage of the truck to make sure that there is solid continuity on all metal parts of the truck as it is important for HF operations. This is something that Alan (K0BG) emphasizes on his web site. Probably not as important for VHF/UHF radios.

Back in 2005, total cost was about $400 including the horribly high state sales tax of about 9.6 percent. This included all high-current capacity cables for power but I supplied the straps used for grounds. In addition, both battery cables are protected by in-line fuses and a nice power distribution unit was included that is bolted into the floor of my truck under the rear seat in the crew cab.

Not the answer you're looking for? Browse other questions tagged mobile installation or ask your own question.

6
How do I power my radio in a vehicle mobile install?
4
Does effective grounding of mobile (vehicle) antenna mounts address common-mode currents?
4
How should I mount a mobile antenna on a vehicle with a non-conductive body?
9
Should I ground my radio to the chassis or battery for a mobile install?
0
In Vehicle Mounting recommendations
1
Connecting radio in parallel with inverter in mobile set up
0
Console vs Trunk mount
1
Mobile VHF/UHF antenna coupling to surrounding objects?
0
6 meter mobile antenna grounding
1
Can Yaesu FT-65 be charged from a 12 VDC automotive accessory outlet?