What type 2 m /70 cm antenna to use when I want to receive a number of spacially separated beams?

So I have a 1.5 m by 1.5 m window. Through it, I have a number of spatially separated ~10 cm wide "beams" coming from local repeaters. 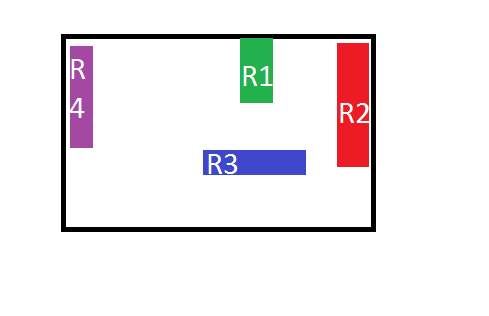 Outside of the marked areas, I have absolutely no reception of local repeaters and inside of them, it's relatively good.

Unfortunately, I can't use the traditional methods of solving the issue by placing an antenna at the roof.

So are there any antenna types that could be helpful in this case?

I think you'll find this problem isn't so easy to analyze or solve. What you have are not spatially separated beams, at least not in the sense that there's a beam of signal going through those specific areas in your window.

The reason is the same reason why individual atoms can't be imaged by an optical microscope: diffraction. Anything small relative to the wavelength of light (or RF radiation, which is just a much lower frequency of light) can't be resolved.

So what you are observing when you stick your antenna in the window and get good reception there isn't that you've placed the antenna in a "beam". Rather, it's just in that particular spot, you've just happened to find a local maximum in the diffraction pattern.

The orientation of the antenna also plays a role, since unlike visible light from the sun or an ordinary light bulb which is incoherent radiation, radio radiation is mostly coherent. This means (among other things) it has a particular polarization, and if you don't match that polarization with the antenna, you'll experience signal loss.

This diffraction pattern can be perturbed by anything with electrical properties different from free space anywhere within a few multiples of wavelength. Unfortunately this means it's not feasible to design an antenna that will "catch" all those signals. Remember they aren't really beams anyway. Simply adding an antenna will perturb the system.

My advice? Trial and error, just as you'd adjust a TV antenna. There's no guarantee you'll find one antenna and orientation that works well to receive all the signals.

You should be more specific as I am not quite sure if I got it right.

Distance in centimeters does not matter. What matters is beam angles.

What you should do is to choose location where you want to set antenna. Then measure angles of each repeater using some directional antenna.

Calculate angle between beams of the most left and most right repeater. That angle is minimum beam angle of antenna you need. You may use wider beam antenna.

Pay attention that for repeaters you have to use vertical polarization, meaning if you use Yagi antenna it should be set vertically. Yagi antenna charts are usually drawn for horizontal set antenna, you have to take that in count.

Not the answer you're looking for? Browse other questions tagged antenna vhf or ask your own question.

5
What type of solder is best suited for radio and electronic use?
13
What is the effect of using different number of radials with ground plane antenna
2
What type of this antenna is it?
3
RTL-SDR dongle - what antenna should I use for APRS receive only?
3
What type of antenna is this?
1
What length and number of radials should be used for a dual band vertical whip backpack antenna?
2
Constructing a ground level antenna array to monitor radio frequencies using SDR
2
When to use air dielectric cables for antenna installation
4
What type of antenna are these?