How to identify type of modulation based on constellation diagram?

The constellation diagrams for a 4-ary modulation using PSK (qpsk),MSK ,QAM and OQPSK look alike. How to differentiate them?

What is the modulation for the constellation diagram in the figure? 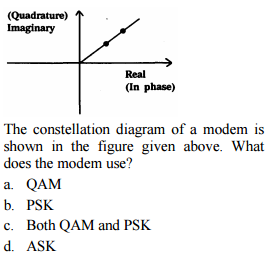 In general, any modulation that makes sense to plot on a constellation diagram could be described as a kind of QAM. However, we generally use the term QAM only for modulations that use both degrees of freedom on the plot (amplitude and phase).

So you can tell QAM from PSK because QAM displays multiple amplitudes as well as multiple phases, whereas PSK has exactly one amplitude. MSK and OQPSK are subtypes of PSK and you are right to think that you cannot tell them apart on a constellation diagram, but the question you show is not asking you to do so — only to distinguish between ASK, PSK, and QAM.

The distance of a point in the constellation diagram from the origin gives the amplitude while the angle each point makes with the horizontal axis gives the phase. PSK can't be the right option here because the amplitudes are different and we have the same phases with respect to the horizontal axis. However, in the case of PSK, we have the same amplitude and different phases(this depends on the order of modulation). For 8-PSK, we have a single amplitude and eight different phases. This means that the constellation points lie on a circle. This also eliminates option c.) This also eliminates QAM because QAM has multiple amplitudes as well as phases which is not the case here. 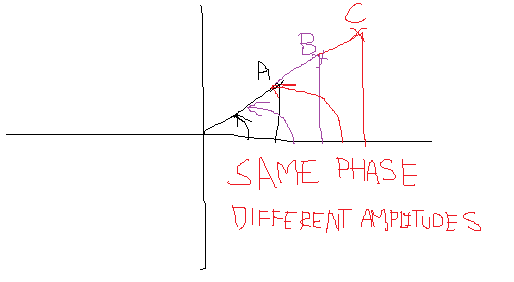 Not the answer you're looking for? Browse other questions tagged digital-modes modes or ask your own question.

6
Why do some antennas list modulation type alongside power rating?
5
Is there such a thing as a phase modulation voice signal?
4
Why doesn't GNU Radio Companion's wx Constellation Plot doesn't give me the clean QAM constellation I get from its Qt sibling?
1
Parts for a 915 MHz low power transmitter
2
FSK or M-PSK for weak signal communications?
2
Can an SSB transmitter be used to transmit PSK?
0
How to decode a message with unknown bit rate in interstellar signal
5
How does a digital demodulator know which level it is reading?
1
Why do PSK modes have “bandwidth”?