How to measure a balun for effectiveness?

It seems there are almost as many "balun" designs as there are web pages about "baluns". There's lots of accusations pointed in all directions ("design Z isn't a balun OR a choke", "design Y is overkill", "design X could lead to spurious emissions/overheating/loss-of-limbs…") and given how hard such an ostensibly simple thing seems to be to understand, I'd like to be able to test any balun I might make or purchase.

How might I go about measuring a balun or a line choke to see if it will work as intended?

balun measurement
Share
Improve this question
asked May 6 '16 at 1:16

This sounds like a reasonable start: the claim is that the CMRR is a good measurement of balun performance.

Measurements and calculations of CMRR [Common Mode Rejection Ratio] can be made by directly measuring impedance in the common-mode path, or by observing power flows using a power meter or oscilloscope

…but then goes on to say that this is subject to errors due to phase imbalances that would not be detected with simpler methods.

Any balun or line choke can be viewed as a 3-port device.

The unbalanced input would count as the one port, and each of the balanced outputs (referenced to the same ground as the input, afaict) is another port.

He then gives the equation:

This basically compares the difference in power transfer from the input to each of the outputs (relative to each other).

So to use this technique, one would need at least a 2-port VNA to measure first the signal transfer to the one output, and then the other. Then a calculated graph based on those two plots could be derived using the above formula.

I don't think this method covers all the things that can go wrong with baluns, however. For example, this measurement doesn't seem to tell you anything about the power handling capability of a balun, nor what happens if you exceed it.

"How might I go about measuring a balun or a line choke to see if it will work as intended?" (emphasis added)

The results of his measurements can be found here: http://karinya.net/g3txq/chokes/

At the bottom of the page he explains how he measured the chokes, using a two port VNA. 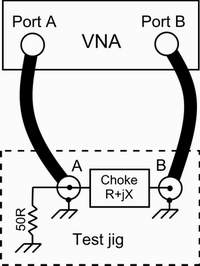 Also a good explanation on why resistive chokes (R > X) are better then reactive chokes.

I have used his charts with great success winding my own chokes, using the "black" areas (this is where R > X) of the charts I managed to wind chokes specifically for the bands intended. While in the beginning I did use air-wound-coaxial chokes, the chart is clearly demonstrating that this is not ideal, as they are mostly reactive not resistive.

This explanation may not be as scientific as it seems, it would give a good starting point for your own measurements of chokes.

Not the answer you're looking for? Browse other questions tagged balun measurement or ask your own question.

20
How to detect common-mode currents or “RF in the shack”?
2
Voltage vs. Current Balun for Dipole

6
How does a folded balun work?
2
Balun and impedance matching suggestions for dipole antenna
1
how does slotted coax Balun eliminate common current?
3
Balun identification from picture
2
How do you construct a 1:1 balun?
8
How were 1920s hams able to measure megahertz frequency?
2
Voltage vs. Current Balun for Dipole
3
How does a 1:4 current balun work?
5
How to properly measure sensitivity of the receiver?
0
2 meter coax cable balun dimensions for use with a ground plane?