Plastic predator bird props — Are they effective? How to mount them?

Are plastic predator bird props any effective at keeping away real birds from our antennas?

Can I mount such a plastic predator bird with screws or does it need to wiggle in the wind to be effective?

In the latter case, how do I mount it then?

The props are hollow and have an opening at the bottom which allows them to be filled with sand.

Pictures or drawings of mounting examples in amateur radio applications are very much welcomed! 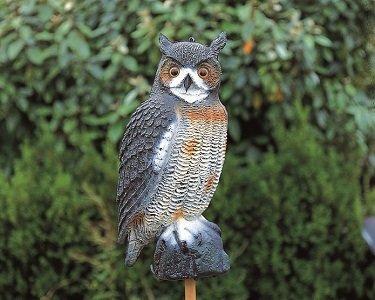 Try the airport “squawk technique”: run a speaker wire up to the top of the tower rotor box and place an outdoor speaker next to it and a PA system, if your friends come around to annoy your antennas turn it on for a few seconds with a good sharp popping sound to the mic should do. The GRUMMAN Aerospace corporation used to use them at the end of the their airport runways to keep the birds and geese away.

Wrap or place fiberglass window screen mesh around your rotor plate or tower to prevent nesting. Wineries and farmers use this to keep birds and animals away from eating their grapes. 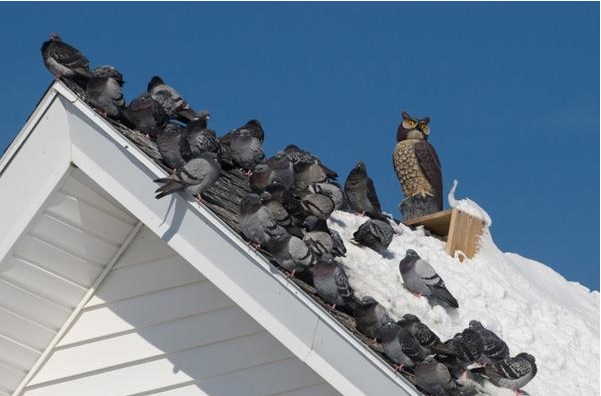 They've been shown to only be effective when moved frequently, and even then, some of the biggest pest species like grackles and pigeons catch on quickly and they become completely ineffective, especially when actual predators are scarce. We tried to use them in a garden a couple years ago with very little success, even moving them around every few days.

The bigger question when using them for antennas is, why? If you have issues with birds building nests in your tower or on top of your beams, other methods of exclusion would probably be far more effective. Fiberglass window screen wrapped around the tower at spots where they might try to nest, such as around the rotor plate, ought to do the trick. A few bamboo kabob skewers taped to your beam in the areas where there are big enough flat spots for a nest, such as where the boom meets the elements should also deter nesting there.

If you're concerned about them sitting on the antenna, you aren't likely to do them any harm, and it's pretty unlikely that less than a dozen good sized birds like pigeons will change the characteristics of the antenna noticeably. If droppings are an issue, that could be a bit trickier, but something like a bit of cloth stuck to a motor that spun a few times intermittently to create motion near their favorite perches should deter them. One of the most effective means we discovered was a motion activated lawn sprinkler, which would obviously be impractical to implement on top of your tower, but you can extrapolate other ways of creating motion and/or noise on queue to scare them off.

We had one at our last house to keep the birds out of our 16x16 vegetable garden. That one was effective, as it had a motion sensor that triggered an owl sound and flashed the eyes.

After some months, we noticed the birds were back. The problem was that a wasp had filled the deep motion sensor hole with mud. As soon as I cleaned that out, no birds.

It was placed on a corner post with the sensor pointed at the opposite corner. We never moved it.

6
Are there easier ways to make traps than coax and plastic pipe?
7
How does aluminum siding on a house affect an inverted-vee antenna next to it?
10
How to combine two 50 Ω antennas such that they appear as one 50 Ω load?
10
How to determine if my antenna is an effective radiator?
10
How to design a rubber ducky antenna
2
Is it possible to determine if I'm adjusting gamma match in correct direction with an SWR meter and if yes, how?
3
What happens to a vertical Yagi when you mount it on a vertical metal pole?
1
Are stainless steel studs acceptable as a feedpoint connector for an aluminum loop antenna?
1
Need antenna for mobile mag-mount LPFM broadcast 88.3 MHz
1
How to match transmitter to Beverage antenna