Using inner conductor of a coax feedline as an antenna

My in-laws have some sort of attic antenna installed many years ago for broadcast reception, which I would love to temporarily co-opt for MW/HF reception, and/or QRP transmission on 40 meters. I'm assuming the antenna itself is designed for the VHF/UHF television bands, but there's a tantalizing amount of feedline leading up to it — at least relative to the weather conditions outside to operate a proper antenna.

If I'd like to use the feedline as an antenna, does it make much difference if I connect to the outer shield versus the inner conductor? Seems intuitively that the outer shield should work just fine as a long wire. But will the center conductor also serve just as well? In this case, does the outer "shield" still serve as such, or would it just sort of re-radiate the signal like a director element might? I am assuming there is no earth grounding on the far end of the coax, that it simply is connected to a VHF/UHF antenna in the attic.

I guess my question boils down to: if the outer braid of a coax is not grounded, does it still shield the inner conductor? Trying to answer this question myself, I can see it going both ways:

Bonus: what happens if I short the inner and outer conductors and then feed that as an antenna?

if the outer braid of a coax is not grounded, does it still shield the inner conductor?

You can, but you might as well use the shield.

what happens if I short the inner and outer conductors and then feed that as an antenna?

Basically the same thing. The currents end up on the shield.

This works because usually the shield is grounded. If you wanted to launch a voltage step down a coax transmission line, you'd connect a voltage source to the shield and the center conductor:

At the instant the button (SW1) is pressed, the voltage source (V1) will pump electric charge into the center conductor and out of the shield. It will pump however much charge is necessary to maintain a difference in electric potential of 1V.

This only happens at the instant the switch is pressed. Eventually V1 moves enough charge to make its 1V difference and reaches a steady state. There are still currents and magnetic fields, but they aren't changing. Without a changing magnetic field, there are no eddy currents, so there's no skin effect so the current can flow on the center conductor. So, skin effect is relevant only for AC or RF currents.

So for radio applications, the current ends up on the shield anyway, and you end up making a field between Earth and the "shield", which isn't really shielding anything. Maybe if you want to use the feedline as an antenna this is good for you.

That's the theoretical explanation. There are also some practical concerns. 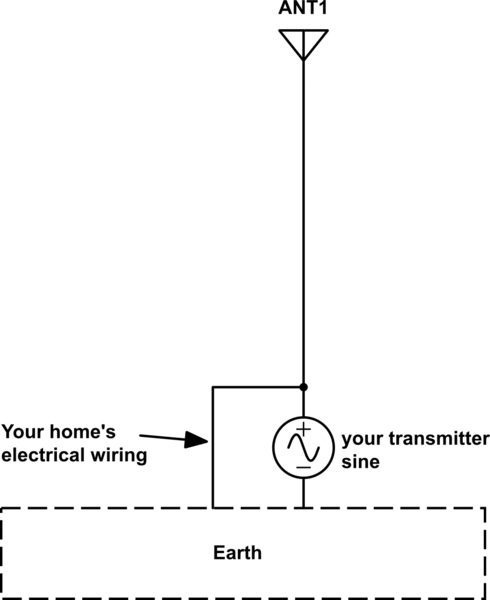 You can still make an antenna out of this: it's called a shunt fed antenna. But it's not how your typical long-wire antenna is set up.

Also, your home's wiring is directly connected to just about every noise source in your home. You may find that it does not make a very quiet antenna.

A rule of thumb is that if there is any impedance mismatch anywhere beyond (e.g. at least a fraction of a wavelength) your (matched) feed point, then it can be used as an antenna. Just make sure your antenna tuner can handle it (drive with very low power until you know it can). For example, the ends of a dipole are severely mismatched even though the feed point is matched without an antenna tuner, and that's why it radiates. Of course, it may not radiate in the direction you want. Shorting the inner & outer conductors is also OK as long as the above still holds.

7
Understanding coax radiation and "current on the shield"
9
Does a balun need to be made with coax?
3
Using an HF antenna for VHF scanning
4
Is RF current always confined to the inner diameter of a braided outer conductor of coaxial cable?
1
Is a "shorted" coax feedline ok for a G5RV type antenna?
1
Exactly why do some SWR meters give a changing reading depending on the length of coax used to connect to an antenna?
0
Terminating double-shielded coax
5
When a dipole antenna is fed via coax, what powers the ground-side of the dipole?
4
What kind of soldering iron is best for PL-259 (UHF) connectors?
1
Is a 94' dipole antenna fed directly by coax useful for any particular known purpose?