I have a 900Mhz transmitting antenna that is being received by one receiving antenna at the moment.

I want to add a second (and possibly third, fourth, etc) antenna to increase the signal strength. Receiving antenna array size is somewhat a constraint, so I want to fit as many receiving antennas together as possible.

I know that I'll have to do a bit of work to combine the signals, but I want to know, in theory, what is the spacing limit between each antenna in order to maximize signal power reception?

At the moment, I'm using antennas with a gain of 5dbi. So each antenna has an effective capture area of 276cm^2.

What is the optimal spacing between antennas and their effective areas in order to maximize signal reception?

If you combine the signals from multiple antennas, you are not just collecting more power from any direction. A higher gain antenna is always more directional; this is a fundamental property of receiving coherent radiation.

If that's not acceptable, because the transmitting antenna is moving, then you need multiple receivers (a.k.a. a diversity receiver) as well as multiple antennas.

If that is acceptable, because the transmitting antenna is fixed or you can point the receiving antenna at it, then you are likely better off using a standard design for high-gain antennas (such as the Yagi-Uda antenna) rather than designing an array from scratch.

It sounds like you will need to simulate various configurations in something like EZNEC or another product. Trial and error is king here.

Normally I would recommend 1/2 wavelength, but in this case you may want to just simulate trial and error.

The spacing between antennas has to be at least $\lambda/2$ where $\lambda$ is the wavelength.The key to using a diversity scheme is that the fading channels between the transmitter's antenna and the receiver antennas should be as independent as possible so the greater the distance between the receive antennas the better.Recieve diversity does not improve received signal strength, it just improves the receiver's sensitivity and in thus doing improve link performance.

Given that you have 1 transmitter and 2 receivers (i.e a single-input single output SIMO system), there are two options you can use to demodulate at the receiver:

1) You can independently demodulate the two symbols, average them and choose the most likely transmitted symbol.This option will double the processing time at the receiver or will use twice as many resources at the recievers so it isn't the most ideal option.

2) What is commonly done is that there is channel estimation done at the receiver (this commonly done by using pilot symbols and the LMS algorithm) and those the channel estimates are used to multiplex the symbols at the receiver to create the decision variable, $Z$.The decision variable, Z, can then be used for demodulation.i.e

where $\mathbf{y} = [y_0 ,y_1]$ is the received symbol vector for the received symbols at receiver 0 and receiver 1, $\mathbf{H} = [h_0 , h_1]^T$ is the channel estimates for the different fading channels to the reciever, $x$ is the transmitted symbol and $\mathbf{n} = [n_0 , n_1]$ is the noise vector.The operation $\mathbf{H^H}$ is the Hermitian transpose of the vector $\mathbf{H}$ and is equivalent to performing a transpose and then taking the complex conjugate (i.e $\mathbf{H^H = (H^*)^T} $). As the equation shows, a divesity gain of order $N$ can be achieved using this method.

General diagram of a SIMO scheme: 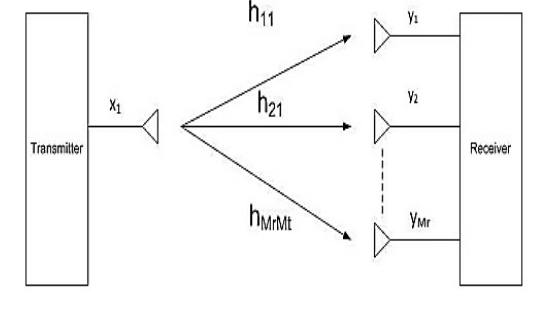